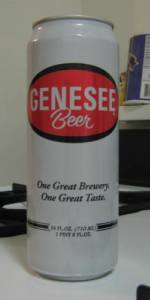 Notes: Brewed with six-row barley malt, corn grits and hops from the Yakima Valley.
View: Beers
Reviews: 251 | Ratings: 652 | Log in to view all ratings and sort
Reviews by Dogstickfetch:

Looks like Beer, smells like Beer, tastes like very good Beer, feels like brewed grains and carbonation fizz in my mouth. I am not ashamed to say this is my favorite Beer, and I love American Adjunct Lagers. aDjunct Lagers seem to be generally hated by most people on this website. They favor the heavily hopped and flavored micro craft brews. I do not drink only Genesee. I also enjoy Guinness, Wiehenstephaner, Taylor's Landlord Ale, and others. What I do not like is feeling like I have been punched in the mouth with a ton of bitter, skunky hops. I grew up on Genesee. My Dad drank it. So I continued to drink Genesee for many years. I stopped drinking altogether for about ten years and just started up again about three years ago. Today was the first Genesee I had in a very long time. I can not see paying $15.00 a six pack for craft beers that assault my tongue with bitter skunk pee. I paid $13.00 for 30 cans of Genesee. I would pay more because I do enjoy the taste. This is my all time favorite Beer.

I hadn`t had it since 1980. I saw it and bought a 30 pack for 15.00. I was sold. Been drinking it or some other form of Genny since. I wish it were available in bottles here. It isn`t a fancy new age nose in the air type of beer. It is a beer drinkers beer. A sit down with my acoustic guitar on my deck in the summer beer.

Poured a 24 oz tall boy into a styrofoam cup. Excellent head, smell of corn, malt and sweet. Taste: Excellent! The sweet smell is feign but not overpowering by any means. The smell of corn is also prevalent. Here in NJ a 24 oz tall boy costs $.99 cents. A case of 12, 24 oz tall boys cost a reasonable $10.99. A 30 pack costs $15.99. To be honest with you, this is definitely better than Budweiser, Coors and the other macro beers out there. I would definitely recommend this beer to anyone looking for a change of pace from the macro brews. Cheers!

hahahahaha~how all the "Beer Snobs" just LOVE Bashing American adjunct Lagers..lmao,this Beer is awesome,13 bucks for a 30 pack!!! hey I LOVE all types of Beer,Including crazy priced "Craft Beer" [20 bucks a 6er and up] But I am just a Blue collar Working guy,who bust his ass for 15 bucks an hour and for what "Genesee Beer" is,it is TOP NOTCH! smooth,refreshing,these babies slide right down and taste GR8! and are every bit as good as Bud,Miller,Coors, or pretty much ANY American Adjunct Lager...which I Myself enjoy a gr8 Deal,so all you "Lager" Haters can F&gt;&gt;k off and go pay your 10,15,20+ Bucks a 6er for some shit you think is "Amazing"!..however most of you "Snobs" would not know a Decent Beer if it bit your ass off and stole your BMW...why do so many of you Beer Snobs hate American Lagers so much anyway? ....I guess it really does not matter why,because those of us that actually WORK for a living will always,ALWAYS Enjoy an Ice Cold American Lager after a hard days work,and appreciate the price point of a VERY Good Beer,~Beerwolf666*

The look is as to be expected for the style. Golden straw appearance with a thin rim. Lacing is sticking to the mug. Heavily carbonated. Nose of bread, corn and alcohol. Taste is a lot like the nose. Decent bitterness from hops and carbonation. There's a sweetness to this beer that balances with the bitterness, and hardly an offensive flavor to hold it back, making it very drinkable.

Overall, I'm a fan of this brew. When I think of tiering my budget beers, this is between my bottom of the barrel, acceptable beer - High Life - and my go-to budget, session beer - PBR. It's better than High Life, but not as good as PBR. First tried this 4-5 years ago when it appeared in 24 oz cans for $1.10 at the local six pack shop. I now live in VA and the local grocery store has a solid beer selection (the best in town) and they sell 30 packs of this. Picked one up for a little less than $17. Not bad at all. No regrets.

smell not too much there nothing bad corn lightly hopped

taste clean refreshing as good as any of the macro beers

mouthfeel good carbonation level not heavy or too sweet

you know, as these cheap local yellow beers go, this one isn't so bad. id take it over a host of competitors for its full flavored and fuller bodied refreshment, and its price. bright yellow in color, and it holds is head a lot better than many of its peers. the nose is sweet adjuncts, maybe corn even, it has that faint starchy thing going on, and a little leftover sugar. there is some balancing bitterness in the finish that probably has to come from hops, which i quite like, it resolves itself. its also real well carbonated, so when its ice cold from the bottle on a hot day, preferably one with a little manual labor, this is pretty spot on. now, there are thousands of craft beers i would prefer in this role, but sometimes you hang out with a grandpa or a farmer or a trucker or someone who doesn't drink craft, not that these demographics are predisposed to crappy beer, just shooting from the hip here. its a viable beverage in the context of no craft, and its way better than any of the macro yellow beers. ill drink more than one tonight...

edit: ice cold in the can, this is darn satisfying, nothing cheap or chemically derived about it, no metallics in the finish, and honestly, it doesnt even warm up that bad. i like the cream ale too, but this one has more value than it gets credit for, especially when judged against its peers. great price as well, dont hate!

Poured from a 12oz. can into a pint glass.

There's really not much I can say positive about this beer, so I'll skip reviewing all the individual aspects of this and just say how I really feel about it: this beer is nasty in every possible definition of the term. And I say that in a nice way, as that's the nicest possible way I can put it.

To put it bluntly: it looks, smells, and tastes like stale piss. You know what piss smells like if it's sat there for a few days? It smells like that, and tastes just like it smells. Drinkability? Zero. It tastes and smells like pungent, metallic, compost rot, akin to what you might expect from prison beer that was fermented from stale bread and old ketchup in an inmate's unflushed toilet. This is a horrible "beer" (if you can call it beer, i'd call it compost juice), the bottom of the bottom, I'd take Natural Ice or Steel Reserve 211 before this beer, that's how bad it is.

It will do things to your bowels that you've probably never experienced during your worst stomach flu or food poisoning experience. It might as well be marketed as a laxative. Instead of urinating frequently after drinking this, it'll squirt out the other end, if you don't vomit it out first, but it's definitely coming back out of one of the 2 holes on your body that beer isn't supposed to come out of.

I wouldn't touch this beer with a 10 foot pole if it was the last beer on earth. I don't even know how it even manages to sell. The epitome and very definition of the words "nasty" and "disgusting" could be summed up in two words: Genesee Beer.

If you want to experience some of the finer brews this brewery has to offer, go for Dundee. Dundee beers are actually pretty good, comparable to craft beers, especially surprising given that this is their flagship.

this beer ive drank very many for when getting home liquor store. i very much will enjoy the label it is very simple and not flash colors. taste is excellent and friendship ;) dont be turned off by beer haha. very good reccomend to liquor stores (other than?) have no receiving!

Yellow pour, actually professional looking, nice white head with retention and lacing, really, looks above average actually. Aroma was all cereal killer grains and corn, sweetness is in the air, but definitely not hop aroma.

Weird bitterness in the beer despite the lack of hops. I guess that is from the lack of barley too. Very metallic. Like 80s Metallica. Corn all up in this one. Mouthfeel of high carbonation and sugar. Pass.

OK, this is my first review. And I'm not going to lie to you. This is a beer that will, for the most part, be overlooked.

This is an American lager through and through. About as middle of the road as you would come to expect. The nose and flavor are not unlike that which exists in other American beers, but it still remains a standout.

When you first come across it in your local liquor store/gas station it will be easy to move on. However, if you are looking for a flavorful, yet affordable, beverage, I urge you to at least try this.

I won't say this is a beer to enjoy with a fine meal. This is your standard, yet refreshing, beverage that you would find readily at parties or Bar-B-Ques.

The flavor is rich, tho mostly undecipherable . There is little to note here, and yet it still stands out. This is a cheap beer that i cannot overlook. It is full bodied. You know you're drinking a beer. Something you can pound back with friends, or enjoy a few of after a long day.

I would choose this any day over your standard bud/bud lite, coors lite swill. If your in the mood for beer but are on a budget, it would not be a bad choice to grab a few of these.

Among be better macros that I've had. Despite the average taste and adjunct character, the lacing on this beer compares with a good craft beer A good simple food or when you just need a cold beer. Had this on tap at Pepe's in New Haven. If you're ever there it's a must.

On tap at the bar across the street from My Airbnb in Schenectady. Crystal clear deep yellow with a thin bubbly white head. Earthy grainy corny notes not the worst beer I had on this trip but far from the best.

Listen up kids, this beer is absolutely terrible... BUT it is 10.99 for a 30 pack where I'm from.. If you can handle the terrible aftertaste its a good beer to ball on a budget with. Probably the definition of a frat beer. Needless to say Jenny and I have had some good time. Stay thirsty and in school kidos.