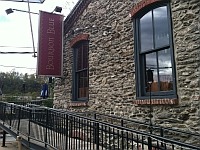 3.2/5  rDev 0%
vibe: 3.5 | quality: 3 | service: 3.5 | selection: 3
First off, Bourbon Blue is not a beer bar, although that would be a great idea. They'd have to add more taps though. And although they are changing their direction to include more craft beers, they still run their $3 U-Call-It and Light beer bottle specials on weekends. It's still basically a college bar after the dinner service ends.

They've got some good beers though, so let's take a look at their spring beer selections...

As for the rest of the restaurant, it's very nice with some great food. I would recommend it. But if you're on Main Street looking for a good beer head to either Lucky's Last Chance or the Manayunk Brewery & Restaurant.