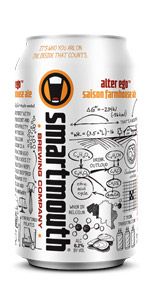 Notes: This brew is a shout-out to the alter ego in each of us, beckoning it out of dormancy. Porter Hardy, IV, brewery president, left his career as an attorney to heed the call of his weekend passion, making beer. Along with some friends who were just as consumed by beer, he established Smartmouth Brewing Company in 2012. Alter Ego, brewed in the farmhouse style of a Belgian Saison, is an effervescent and refreshing beer with fruity notes, a hint of pepper and a dry finish. Try pairing it with seafood, especially oysters or mussels, smoked sausages or cured meats. It complements aged gouda, chevre and ripe soft cheeses.
View: Beers | Place Reviews
Reviews: 33 | Ratings: 145 | Log in to view all ratings and sort
Reviews by clayrock81:

Poured a cloudy orange with minimal head and lace on top of a spicy, citrusy with mild fruit ester aroma with touch of sweetness. Lighter bodied than other saisons, a tad too spicy for my liking, kind of draws away from some good orangey-citric and sweet fruit and malt flavors. Spices and some sharp carbonation lead to a dryer finish than usual and there's a touch of sour puckering as I get near to finishing this beer. Not fantastic but a good session saison.

Taste - Taste reminds me more of a Belgian ale that a saison. lots of lemon and orange, yeast, wheat and very nice spicy flavor.

Overall - A good beer, not what I am used to in a saison but clean crisp great flavors.

Traded for this beer recently, never having this or anything from Smartmouth before. This was canned on 1/21 so obviously, this wasn't as fresh as I would have liked but it was still a decent beer with a heavier feel to it than the style and amount of alcohol would have led me to believe.

The pour to this was decent as the beer was a hazy apricot with a big head full of big bubbles. Not a lot of lacing was left behind as I worked my way through this and the aroma wasn't terribly strong either. Some pepper, yeast, spice, light citrus, and bread were in the nose and all of these were in the taste as well. Heavy, somewhat slick, and just a bit thick, this went down easily but it didn't have the typical flavor found in a Saison or Farmhouse Ale. The carbonation was light and the alcohol wasn't easily detectable, but the former may have been because of the age or this. Regardless, this wasn't terribly funky and the earthy feel of this wasn't that strong either.

When I finished this off, there was a slight warming effect that I could feel. It would have been great to have a fresher can of this as I feel that there was a lot of potential in this beer. The best aspect of it was the funky design of this as it held my attention for a while. As for the beer, it was relatively easygoing and one of the more accessible examples of this style that I've enjoyed.

As near to the classic Saison from the US. With DuPont considered by many to be the best, this is very good. Others are north coast brewing Le Merle and Heavy Seas' Red Sky at Night when they brew it.

Served on tap at Smartmouth Brewing Company. Pours a hazy golden color with a nice white head. Has a nice, fruity taste and good body. An across the board above average Saison.

I love the color of this beer - it's a bright a bright maze yellow with a small head. The smell is heavy on fruit, but the smell is not. The taste is very smokey with a pepper hint as well. This is a pretty decent farmhouse with a lot going on.

Love me some farmhouse ales. This one is good. Def a little pepper and spice. Great color and texture.

L: golden yellow with a thin head and sparkling lassing

S: real funky yeast smell with a bumble gum smell to it

M: mild to light carbonation. A little bubble gum after taste at the back of the throat

O: nothing to write home about but it's a solid good beer. If you have the chance I'd definitely try one