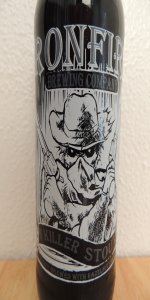 Notes: Six Killer Stout is not for the faint of heart. Six malts, six hop varieties, six ingredients—it’s a triple threat. Brewed in the style of a traditional stout with 100 percent Arabica Hazelnut coffee beans to get your clips spinning. Feeling strong? Step up to Six Killer and see who's boss!
View: Beers | Place Reviews
Reviews: 15 | Ratings: 61 | Log in to view all ratings and sort
Reviews by anon:

It's interesting doing this review "blind," not knowing the low average so far, but here it goes, from notes:

Poured into my Stone IPA stemmed pilsner glass, the liquid is jet black, topping with a sizable tan head formation with very small bubbles. Head and lacing persist throughout the consumption, and that's always a big positive for me.

Taste: follows the nose, with the hazelnuts and coffee being dominate; I detect some hop bitterness on the end but only when the beer had warmed significantly. I don't feel that any element is out of whack/balance.

Mouthfeel: full bodied for a six percent stout, and very smooth, except perhaps a touch of hop bitterness on the finish when the beer warmed.

Overall: this is a terrific flavored American Stout and I'm puzzled as to its low score thus far. Perhaps the recipe has been more dialed in by now? Not sure, but give it a shot.

Six Killer Stout is brewed with coffee and, sure enough, is a dead-ringer for the stuff; like your average cup of Joe this is black, inky-looking and, for the most part, flat (allowing for a little bit of brownish foam and the odd bubble, naturally). The fact it concedes not a single highlight even held directly to the bulb says something...

Here's a bouquet that will wake you up. Each sniff opens your eyes wider and wider. Instant rejuvenation. Obvious gianduja and cappuccino smells aside, this aroma strongly resembles roasted peanut skins and is chockablock with milk chocolate and peanut butter flavour. Frankly, it smells like an old-fashioned chocolate malt shake.

Despite a fantastic aroma, the taste is truly an epiphany. Turns out arabica hazelnut beans offer a flavour that's milky, malty, and mildly chocolaty with a brief but intense jolt of roasted coffee and a lasting, notably nutty aftertaste as well as a small teaspoon of cinnamon. If I could get the recipe in powdered form and mix it with hot water I would.

Coffee stouts tend to be divisive - recipes either include too much or too little coffee depending on who's drinking them. This one, however, should please all parties; there's plenty of steeped, roasted bean astringency but also a chocolaty, fairly sweet lactose-like chaser on the finish. Everybody's happy!

Six Killer Stout is deadly stuff - it offers the depth and richness of an Imperial Stout but the irresistible, easy drinkability of a dry stout. I don't know what kind of beer Ironfield was turning out prior to 2014 but, as this bottle strongly suggests, they've really turned things around since then. This one hit the bulls-eye so far as I'm concerned.

Black color with a slight head. I raise the glass to sniff-- cucumber and burnt cereal. I take a sip-- ow! who spilled Guiness in the ash tray? I taste the most amazing smoldering housefire flavor. But after I get hold of my taste buds again-- is it some kind of coffee dregs heated in the microwave with a dash of brake fluid?

There seems to be some sort of grain involved in this, but it's more like some kind of chemical process than a beer. Sharp, bitter, and harsh, like something used to swab the coffee urn at the AA meeting. My mouth can't seem to feel the mouthfeel for the burn of bitterness. The brewer claims hazelnut coffee is in here along with six hops and six malts. May they rest in peace.

So laughably undrinkable this would be a great subject for Candid Camera-- the sip, the double take, the shudder, then looking around for the prankster. On tap at Local Habit in San Diego.

Pours an opaque black with a foamy super dark khaki head that settles to a small cap on top of the beer. Thin rings of lace line the glass on the drink down. Smell is of dark roasted malt, cocoa powder, coffee bean, and hazelnut coffee with cream aromas. Taste is much the same with char, earth, cocoa powder, hazelnut coffee, and earthy hop flavors on the finish. There is a mild amount of roast and hop bitterness on the palate with each sip. This beer has a lower level of carbonation with a slightly crisp and medium bodied mouthfeel. Overall, this is a pretty good beer with a strong hazelnut coffee taste, but there are also some earthy hop flavors that I am getting as well.

A: Pours black with a thin light brown head. Leaves some tiny spots of lace down the glass.

S: A really intense coffee aroma mixed with wet earth and a bit of vanilla. Cigarette ash, burnt wood and smoke malt in there as well. Love the coffee, but the smoke aroma feels a bit off because of all the smoke.

T: Again, I like the coffee aspect of this. It's dark, rich and heavily roasted. But there's a dirty, ashy taste that really kills this one. Tons of smoked malt and ashtray, along with burnt brownies just don't do it for me. I think the loyalty to the number 6 kind o hurt them in the mouthfeel department as well, as 6% just isn't enough to hold up these bold flavors. It's no drain pour and it does get better as it was up, but I won't be revisiting this one.

Pours pitch black with a small foamy khaki colored head that retains decently. Smell is if straight hazelnut, the most hazelnut I've ever smelled in a beer. Underlying chocolate and smoky malt. Taste follows the nose with a burst of hazelnut coffee, followed by notes of chocolate, char & roasted grains, a hint of vanilla. Mouthfeel is somewhat thin and foamy. Certainly a winner for anyone that likes hazelnut flavored coffee.

A: Pours like coffee black with a light ruddy brown wash towards the edge of the glass. Thinner appearance with a creamy finger of oatmeal khaki froth that slowly subsides to a small film around the glass. Wavy stick coats the walls after sipping accompanied by some dotting here and there.

S: Aromas encompass dry roast coffee and darkly kilned malts with a subtle earthy hop presence. The nose carries on with more roasty charred beans and is a touch ashy. Otherwise somewhat clean but the hazelnut is not really discernible here. Decent coffee character with nothing terribly flawed or offensive.

T: The taste is very bitter and hits in a harsh way. Acrid table coffee combines with a seemingly high hop bitterness and its is just too aggressive and sharp on the palate. Has an earthy nuttiness but the ashy charcoal mixed with some cocoa powder and a dash of citrus really start to clash. Relatively light with no alcohol flavors coming through. This one is just not working for me. Too much going on without a bigger body to carry out.

M: Body is thin and a little watery. Which is fine in a table stout however this one gets a bit chalky and acrid with a drying finish.

D: Probably sounded good on paper but poorly executed. Too thin to stand up to all the robustness and hops packed in. Turns harsh on ya and not in a good way. Not something I would want to revisit.