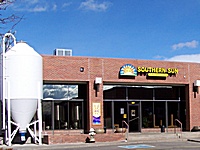 V-The Souther Sun is located in South Boulder in a strip-mall type shopping center near Neptune Mountaineering. The place is medium sized with a small patio out front. The vibe is heavily hippy, but that seems to be fading as Boulder loses its hippies to the suburbanites. Now you'll just as many families as stoners in there.

Q-The beers are of moderate quality. There are some really good ones that appear every now and again, Hop Vivant for example, but others are less impressive. I have never had a bad beer from the Southern/Mountain Sun empire, but many of them just aren't that good. That being said, the beers pair well with the food.

Ser-The servers are almost always friendly, usually prompt, and mostly knowledgeable about the beer and food menu. They can get a little spaced out at times but I have never had one completely bullocks an order. They also offer multiple sizes and use appropriate glassware.

Sel-There are usually about a dozen Sun beers on tap and a few guest handles. It is one of the bigger selections for a brewery/brewpub in town, actually. Everything from Belgian styles to IPAs.

F-The food is probably the high point of the Sun empire. It is tasty, cheap, and made with lots of love. The offerings are mostly bar-type dishes, but the food never feels overly fried or fake like a lot of bars. I would eat here instead of the Rock Bottom everyday for example.

O-The Southern Sun is losing some of its hippy charm as the years march on, but it still serves its purpose as a friendly hangout with decent beer and good food.