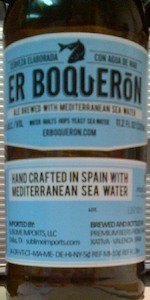 Very cloudy, yeasty golden with a hint of a white head.

Smells of malts, stone fruit like unripe plums, herbs and a hint of coriander.

Tastes of Belgian yeasts, malts, plastic, hefe-weizen like in some ways. Not getting the sea water.

I got this in Kazanlak, Bulgaria of all places, and brought it back to Redding, CA where I am drinking it, April 11th, 2019.

Bought 1 330ml bottle at a market in Puerto Vallarta Mexico.
Pours a light good with a thin white head, a light yeast nose.
Not much flavor at all ,kind of a weak Bud taste with a bit of salt.
Not my cup of tea at all.

330ml. bottle. Pours a cloud gold colour, with a good head that leaves a big lace. Smell is mainly tropical fruits, whit some citrus and cereal. No salty notes. Light body, crispy but soft texture. Taste is again tropical fruits and citrus, though this time the salt is more evident, specially in the aftertaste, but nothing disgusting, in fact, very drinkable. Just very soft palate.

L: It pours a hazy burnt orange with a thin head
N: Sweet and caramel like. Some floral notes
T: Fairy complex with caramel, notes of vanilla and sweet malts
M: Thick and creamy
O: A great beer but without any hints of the seawater used to make it

From bottle, pours a hazey golden colour with a good white fluffy head that hangs around. Aroma bready, salty, malts. Taste grain, sweet, salty, floral. Not to bad worth a try.

Served in a mug, it pours a very hazy, viscous, pale yellow with a two-finger head, good retention.

This beer has a pleasant, soft character, and a nice balance. There´s a salty, mineral tone underlying the flavor constantly, and the sweet malts, the slightly fruitiness and the yeasty notes rotate themselves. There´s a mexican drink which is somewhat similar to this, both in flavor and in mouthfeel, and it's called tepache.
The finish is salty and bittersweet, long.
Viscous, velvety mouthfeel yet light body, with low carbonation.

An ok experiment, but nothing more.

Pours a very cloudy golden color with virtually no head. Lacing is minimal. There is a lot of sediment. Light, bready aroma with a very mild floral aspect. Maybe slightly salty. Not much too it. Almost has an aroma I would expect from a lager. Pale malty taste. Very watered down. Slightly floral but not much of a hop aspect to it. Not a very displeasing taste, but there is just nothing there. Maybe slightly astringent at the end. Overall light and crisp, though. There is moderate to heavy carbonation.

Apparent use of a Belgian style yeast given the flavor profile. Fruity with hints of light yeasty bread, banana, pear and apple. Sea salt is evident in the aftertaste.

Medium-high and lively but not harsh carbonation. Light body.

From Hipercor. In Teku glass. Watchinh Sons of Anarchy 2x08. As I expected, sea water doesnt add anything good to beer but just the opposite. Bad smell and worst taste. Lots of foam.

Intense head with large bubbles that dissipated to a ring in about fifteen seconds. Audible carbonation. Golden orange with a hint of cloudiness. Not getting much on the nose, fruit and spices want to play, but the smell of the hotel glass is more pronounced. Kinda boring. Maybe it's cause the label says sea water but I swear I get a touch of salt. Taste is reminiscent of a Belgian style with a spicy tint to it. Unimpressed. Mouth feel is intense. Too intense. After taking a small sip and letting it sit, it exploded in my mouth and I swallowed foam. Not surprising now looking at the bottle. I poured half of it into my glass and now the bottle is half liquid half foam. Overall, when the look is the best thing about a beer, there isn't much more to say.

Appearance: Cloudy gold-orange. Bright white head. It teems with life as the fine-bubbled and seemingly natural carbonation lifts chunks and specks of yeast up into the glass and then releases them to drop and re-join the procession. Oddly, it has a Limited head retention and next to no lacing.

Aroma: Salt and the pulp of previously squeezed citrus fruits including lemon and grapefruit.

Flavor: The saltiness hits you, but not heavily, just slightly before the softly sweet malt and fruitiness. In the first few sips that could be either off-putting or enticing, depending on your own palate. There's a very mild tartness to it - ever so slight - which could be coming just from the yeast; and a clean salinity. A very mild bitterness helps to balance it, and it's a rather nice progression with salt followed by lemon, golden malty sweetness, and then more salt and a ghost of lemon in the lingering finish.

Mouthfeel: Medium bodied on the light side, and effervescent and crisp.

Overall: Ahhh Barcelona. What a better summation of its aromas than this? The sea, the fruit, the underlying funkiness... 'tis Barcelona in a glass.

The beer leads off promising, with a nose of slight funkiness and what I can only describe as the smell of "crispness". However, it ended up tasting like a slightly saline malt liquor. If the body was dialed down and tartness showed up, then this would have been awesome.

interesting beer here to say the least, and i am only just starting to get into some of the spanish stuff, so this is fun. enjoyed at the new chowder room on south broadway, which is a must for seafood lovers, such a cool little spot. fitting this is on the menu, and one i have never even heard of to boot! they may call it a lager, but it is almost certainly an ale, brewed with seawater. i cant imagine its too much seawater, but you get the minerals and the slight briny character in here for sure. its a cool compliment to seafood because of its lightness, but its not quite as weird as i wanted it to be. the bottle gushes a little when opened, lots of energy in this one all pent up. vigorous head on the pour settles after a minute, and there is some haze here. carbonation is intense over the textured base. must be some wheat malt in this, or a hearty pils malt, its fun nevertheless, and infinitely sessionable at this dry level, and low abv. not as from the sea as anticipated (and indeed hoped for), but a unique and pleasantly drinkable beer, with a mouthfeel like murky champagne, if such a beverage exists. an enjoyable companion to a very good meal.

Poured into a Gulden Draak tulip. A bit of a gusher out of the bottle, pours a quite hazy caramel amber with a fine two finger white head with good retention and lots of lacing. Interesting aroma of biscuit malt, floral and herbal, saison style yeast. Flavor is sweet bready malt, grain, Belgian yeast, apricot and apple, rose floral, finishes with floral malty fruit and mild Belgian spicing. Medium bodied wih light creaminess. An odd golden ale that has a lot of Belgian character to my taste, although other reviewers don't note that. Fruit and yeast seem Belgian, but the malt and floral character is more similar to a golden ale. Different and interesting, if a bit subdued in flavor. The salt component is subtle.

A: The beer is hazy yellow in color and has no visible carbonation. It poured with a short white head that died down, leaving lacing on the surface and a collar around the edge of the glass.
S: Light aromas of malts are present in the nose along with faint notes of toffee.
T: Like the smell, the taste is a bit sweet and is mostly malts with no salty notes or bitterness.
M: It feels light- to medium-bodied on the palate and has a moderate amount of carbonation.
O: This beer is easy to drink but nothing really stands out about the smell or taste, both of which seem muted.