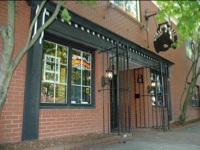 Jon's driving, I'm pretending to navigate. I don't have a map, and I have no idea where we are. I'm pretty sure everyone's on to me. We're in Oregon, I've never been here before and everybody knows it, but as I'm the only one here with wheels and am always driving, I'm most often paying attention when no one else will, so me riding shotgun is a good fit. And besides, I get to choose the new discs and take in the sights as we head to, where are we going exactly? Horse Brass...

I've never seen anything like this before. It's a beerflyer's nightmare, there's shit everywhere. Towers, pairs, single taps; it's a clusterfuck of someone's organization. The bar is a wraparound and seats a dozen and a half. Intricately carved wood posts and crossbeams, covered with beer signs and a stained glass "Publick House" panel above, and heavily pasted with coasters, dangling Grolsch top necklaces, Xmas lighting and horse brass medallions which Phil described as being "kind of like bling". Spots to the front and center and strung Guinness mini-pint lighting. There's a large arched mirrored bar back with taps everywhere, booze with serving counters suspended, and glassware above. Ceiling fans, lanterns, glass chandeliers, mounted lamps; the walls decorated with beer & whiskey mirrors, and an entire wall done with Guinness mirrors, the John Gilroy prints and posters, and a great "The gentle art of making Guinness" 12 print set. The "side" side of the bar is open, by that I mean that there isn't a framed wood section overhead. Mirrored back, with shelves of booze, a dozen tables running to the rear, a duel dart area, mirrors, mirrors, mirrors, beer prints, whiskey prints. Lots of dark wood and some leather, and a suspended Trekkie model of the USS Voyager (NCC-74656).

The adjacent tabled areas are madness. Raised elevated seating areas to both sides of the front entranceway with a railing separating them from the bar ahead. 8 long tables in the larger room to one side and 8 various sized and shaped tables on the other side with a forward darts area. To the rear there, more darts, Horse Brass soccer team photos, English flags, soccer pennants and ribbons. A heavy, heavy WWII theme throughout; war photos, English recruiting posters and a whole lotta Churchill goin' on. Tons of well worn wood here, you'd think the place was considerably older than it is.

They've got a small bottle list with everyone's favorite Belgians and some Germans and English, that I never needed to know about as the taps were more than enough to keep me busy 'til the Spring. Also, some wines, port, single malt scotch, etc.

I had a pint of the Walking Man Black Cherry Stout which was just sublime. Chewed the fat with the bartender for a bit. "Here, try this. Here, try this". I asked about the lack of beers from Yakima Brewing/Bert Grant's Ales, and he told me the sad tale about the decline of the brewery. Out back on the bulletin board, a cartoon depicting fermenters at Yakima Brewing being packed up and moved. One character says "Those fermenters sure make a lot of noise on the forklifts", and the other character says "That's Bert rolling over in his grave". True, true.

This place is outstanding.

Some decent smaller craft brewer's taps but an English pub vibe and lots of those sort of taps. Roomy, but I am writing a review to bring this rating to reality.

This is a Portland institution. I am 6 decades old, and I learned to drink here. It has changed a lot over the years and now it tracks and much younger crowd.

A member of what I like to call the "Holy Trinity" of Portland beer stops, along with Bailey's and the Beer Mongers. Service is great, the tap list is comprehensive, and the vibe is wonderful. I've never been to England, but if their pubs are half this good it must be a wonderful country. The food is definitely English pub grub. I recommend the fish and chips (Portland's best) or the Bridie. Oh, and there's darts. Gotta get down on some darts.

Old-school "must see" English-style pub. Dark and a bit dirty with tons of great offerings and nice cask selections. A Portland classic and an early pioneer/purveyor of craft beer.

I had read about this place for a long time and had the opportunity to try it last fall (2014). Good selection of craft beers both known and unknown (to me). Food was good, not the best I have ever had but certainly not bad at all. Staff was friendly. During our visit it was a rainy Saturday and there were few people in for lunch. Beer list was good, but I was hoping for more variety. Definitely worth checking out and sampling the food and beers.

This is a top notch English style pub in Portland. Fine selection of local OR, US and foreign offerings in a welcoming environment. Attentive service with solid pub food offered.

"if it were any more authentic, you would need a passport"

Nuff said. This place is legendary, but for good reason. Its dark, its real, its authentic. But the taps are clean, and the service is friendly, and most important, they are all about THE BEER.

Real great pub to hang in. One of my favorites in PDX. Always makes me feel at home when I visit.