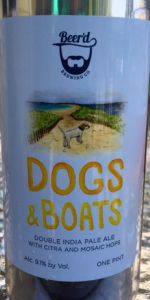 Rated by Mctr234 from Rhode Island

Reviewed by TurboMon_911 from New Jersey

4.13/5  rDev -3.1%
look: 4.25 | smell: 4.25 | taste: 4 | feel: 4 | overall: 4.25
Pours a semi-lucid hazy orange with visible carbonation and creamy white 2 finger head that lingers and leaves lots of lacing. Earthy, piney & floral aromas abound that mesh together rather nicely. Good malt backbone and structure but has an overly bitter finish that loiters and tends to overpower the experience for me. Mouth is medium bodied which hides the ABV but left me wanting more of the malty notes that I had perceived earlier . An overall outstanding brew that I would seek out again.
Aug 27, 2022

Reviewed by smaddock from Massachusetts

2.89/5  rDev -32.2%
look: 4 | smell: 2.5 | taste: 3 | feel: 2.5 | overall: 3
This beer is a good illustration of why I normally don't drink West Coast IPAs anymore. If you have had beers from Tree House and Trillium that use Citra and Mosaic hops, you know right away that this beer is a mistake. It buries the character of the hops under too much malt and booziness. Citra hops should give this beer some citrus qualities but compared to Tree House and Trillium, they are invisible here. Tree House has a beer, Big Blue, that uses Mosaic hops and it has a blueberry taste without adding any blueberries to the fermentation process. There is none of that berry character here. What a waste of time. Ugh.
Aug 22, 2022
Rated: 4.04 by NYR-Zuuuuc from Connecticut

For some reason I was expecting this to be a hazy India pale ale, but, lo! It's an incredibly well done west coast styled IPA. Balance and nuance abound while delivering a nifty complexity to the palate. I didn't get a lot of Citra hop character from this sample, but I did pickup on the earthier, pinier and more floral like notes of Mosaic. I like how the alcohol is so well-hidden with this beer. The malts and hops are what shine.

4.24/5  rDev -0.5%
look: 4 | smell: 4.25 | taste: 4.25 | feel: 4.25 | overall: 4.25
Look..pale brown with very little haze. Inviting white foamy head. Looks like beer
Smell...grassy citrus and dank. melon candied dark fruit. Very nice.
Taste...danky sweet pine to a bitter resolution shortly thereafter. Dare might I say reminiscent of sip of sunshine???
An oniony bitterness in the finish.
Feel.... a sticky fullness with an ample carbonation and lacing. The carbonation level really lightens the entire presentation of the over 9 Percent ABV
Overall...this is some solid business that I would definitely visit and revisit. This brewery has others I would explore. Very solid and tasty beer. If you like Double Imperial IPA s this will due just fine.

Reviewed by SimcoeBuddy from New York

4.51/5  rDev +5.9%
look: 4.25 | smell: 4.5 | taste: 4.5 | feel: 4.75 | overall: 4.5
A: golden orange haze, typical of an NEIPA/Juicy IPA style of beer. Poured a quarter inch head that faded away to a light ring, medium lacing (mind you, this can is about 1-2 months old so it might have an effect on head formation)
S: lively citrus bouquet including candied mandarin and yuzu to the point of being funky/skunky, followed by maltiness and yeast. Slight piney aromas, too.
T: it's really good. Maltiness stands out right away, hop presence is more than abundant. Flavors include pine resin, candied bitter orange, and a light bready flavor (in a good way).
M: classic imperial IPA bitterness on the back of the tongue and there is creamy carbonation throughout, this beer definitely hits all the right spots.
O: super impressed with this brew. No wonder it ranks in the top 2000 beers in the country. Will be on the lookout for more of this.

Enticing nose. Lightly dank with citrus notes in the lead. The slightest touch of pine peaks through as well.

Taste follows. Classic citrus and forest notes dance on the tongue. Nicely dank finish with some of the malt backbone shining through. Very good.

The body is medium to full. The higher ABV is well hidden.

This was a very nice beer. A great introduction to a brewery that I’d love to try more from

4.05/5  rDev -4.9%
look: 4.75 | smell: 4 | taste: 4 | feel: 4 | overall: 4
Pours a deep gold with excellent clarity; two fingers of fluffy white foam; streaming carbonation; excellent cap retention; heavy minus lacing and heavy ring. Lemongrass and skunky hops nose. Taste follows nose; medium plus bitterness; firm sweet malt base; slightly phenolic (9.1%) which I like. Medium light body, moderate carbonation; dryish tongue coating; no hop astringency. Overall, a solid DIPA; however, there’s something malty/skunky in the nose, on the tongue that I don’t like - Mosaic? One and done for me…
Mar 03, 2022

Reviewed by Utica_Club_1971 from Massachusetts

I grabbed it because It's from a local brewery (I like to support locals) and the can says "Double E. India Pale Ale with Citra & Mosaic Hops." Sounds great, let's give it a try!

And indeed, it's just too boozy for me. I like double IPAs up to about 8.1, 8.2% ABV. This beer is considerably above that. Other reviewers have pointed out that Dogs & Boats does a good job of hiding the ABV. I agree with them. It is definitely a very nice beer — not like the kerosene marketed as beer that one often finds in high-alcohol content beers. I do like it.

The aroma was the expected hop blast of the style, citrus mostly with a touch of pine. Just a very light touch of grain.

Pretty close to the same on the tongue; the citrusy hops dominate, nice bitterness, light malt, and good hop bite at the back.

The body was just on the fuller side of medium, had a pleasing coarseness, and a semi-sweet finish, that became nicely dry quickly.

Drinkability was very good, another brew that was gone too soon.

Overall, this is what I consider an ImpIPA to be; nothing subtle, weak, or uncertain about it. A must-try if you see it.

Reviewed by Pru from Massachusetts

Rated by jbolger from Connecticut

Reviewed by Ada_Ace from Connecticut

Look: pale orange, lacy head stuck around until finished.
Smell: Nice aroma, not too powerful
Taste: Definitely citrus off the bat, not sweet, a little pine and very subtle sweet aftertaste (tangerine caramel). Incredible SMOOTH. This is 9.1??
Feel: Bummed about the carbonation, a little too light if you ask me.
Overall: easy drinking tasty double

4.6/5  rDev +8%
look: 4.5 | smell: 4.5 | taste: 4.75 | feel: 4.5 | overall: 4.5
Canned on 11-5-20.
Lovely deep amber color, slightly opaque with unfiltered protein but not "hazy". Solid, creamy head of white foam leaves lace in clumps and splotches as it recedes to a ringed cap of ever present film.
The aroma is gorgeous! Rich, heady steeped grain and caramel, loads of mulched pine needles and blood oranges with a faint whiff of alcohol. Smells like old school left coast 2XIPA's like Stone Ruination or RR Pliny.
As good as it smells, this tastes even better. Just delicious.
Full on malt flavors of almonds in toffee, honey drizzled multi-grain cereal, apricot and tangerine jelly on toast with juiced spruce tips.
Skillfully balanced offering a rich and complex blend of fruity malt sweetness and sharp citrus, earthy herb and conifer hop character in a lush, medium - full bodied ale that demands sipping but never seems heavy.
Most of the beers I remember tasting this good aren't quite the same after increased brewery and batch capacity so it is great to find a semi local brewery that still gets it and makes amazing, small batch brews.
Alcohol is always in the periphery but never steps on the malt or detracts from the controlled hop bitterness, only reminding you of the 9% as a warm compliment to the sweet n sour hop finish.
Just fantastic. One of the very finest beers I have had in years.

Smell: Primarily dank with resinous pine tones; underneath, there is a subtle fruity aroma bringing papaya, peach and melon

Taste: The more subtle fruit flavors hit the tastebuds first, with the papaya, peach and melon starting out; quickly, those elements are subsumed by the dank piney tones; a lot of bitterness in the finish

Mouthfeel: Medium to full body with moderate carbonation; a touch of warmth in the gullet

Thanks, jrc1093, for the opportunity

Pours with a light to medium haze level, supports a long lasting frothy cap and leaves a bunch of all sorts of fine lacing. Nice looking brew.

Tasty and full flavor DIPA. More grapefruit and hop forward bitterness all over this one. Alcohol well concealed but not all out of the picture......fruity, flavorful and heady stuff @ 9.1%....enjoyable and well worth a try

Rated by BFCarr from New Jersey

Loved the hue to this as this was brassy, bright, and bubbly. Enough head topped it off as that settled nicely although only a thick ring of lace remained about a quarter to a third of the way down the side of my pint glass. While this was brewed in New England, this was not your typical New England IPA as as there was a ton of citrus in the nose - dank, floral, pithy, tangy. You name it, it was there and and it was quite appealing without being terribly flagrant or strong. Lots of tangerine, resin, and hops emerged once this fully warmed up as it was hard to keep in my pint glass, and very appealing given how heavy it was due to the lack of any overt carbonation.

There's booze here too and you'll feel it long before your last sip although it fit in well with the heavy hop and citrus tone that this beer presented. Canned on 2/3 (or 2/9?) of this year, this held up well as it looked and felt as fresh as could be. It's not often that something brewed in the Nutmeg State has a West Coast feel and taste to it but this did and passed the proverbial taste test with flying colors. Really enjoyed this beer and will be on the lookout from more beers by Beer'd. This is what an Imperial or Double IPA should strive to be!