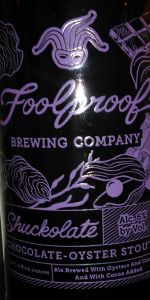 Skeptical of the oyster aspect, but no worries, this is more chocolatey and roasty than briney. Pours dark near black with minimal head. Aromas and flavors similarly are both roast-forward with hints of cocoa. Slight sweetness toward the end of the sip. Not bad.

Minor head which leaves nearly no lace. The liquid is nearly black, naturally. I get the faintest of light along the edge of the glass.

Coffee and dark chocolate are the predominate smells. I get a slight bit of chalkiness.

This is a dry stout, devoid of any creaminess. Black patent malt is the main taste. Lots of carbonation and a body that leans thin. The aftertaste is like Baker's chocolate--bitter and long lasting. I get a sense that there's some hop increasing the bitterness.

Many thanks to SawDog505 for this can!

O - Oyster Stouts always intrigue me, this is worth a try!

The beer looks a lot inkier and blacker than it really is. The nose is definitely chocolate, dark malts, pretty much a dry stout with some sweeter notes popping through. The beer is not as full bodied as is probably warranted, and in that I knocked it down a touch in the overall mouthfeel. This beer could benefit from a bigger and fuller body. The taste is a bit silky, chocolate, nice roasted chocolate maltiness, and quite drying in the finish. There is a bit of saltiness in there and it does remind me of other briny oyster stouts. If you are looking for oyster notes, good luck finding them because I couldn't. It's dryness in the finish is a nice touch. I like this beer, would go back again, glad I bought the four pack, but this isn't bowling me over either. The saltiness comes through a bit more as the beer warms. The finish is quite good regardless. This is worth seeking out but don't expect to find liquid oyster in the can.

A: The beer is a deep dark brown color, with a thin off-white head that fades quickly and leaves a thin lace on the glass.

T: The taste starts out a little creamy with flavors of chocolate and coffee. Then a decent oyster bite comes in along with a touch of dark fruit. The hops presence is very mild but provides a good balance. The after-taste is bitter-sweet.

O: Tasty, goes down easily, not too filling, decent kick, good representation of style, this is a solid beer to drink for a while if you’re in the mood for the style.

Can from Bert's
Deep black with a smallish off white head. Rich roasty chocolate aroma and flavor with a hint of earthy minerals infused within it. Not to shabby.

Taste is more of the same from the nose, lots of varying chocolate but not nearly as rich as I expected, some cocoa, creamy hot chocolate, little bitter dark or baker's chocolate, also with that mild biscuity wafer cookie and caramel notes. Then a mild salty briney note, not much, a bit of a different earthiness, then the oyster flavor itself kicks in a bit with the creaminess, strange that I can actually taste oyster, usually an oyster stout you just get the briney earthy sea like taste. A touch of bitterness, that increases a bit on the back end. Finish is mildly sweet and sticky, little cocoa and dark bitter chocolate lingering, with a touch more oyster flavor, and hint of roast.

Mouth is med bod, it wants to get fuller rich bodied but seems to be lacking the extra backbone to get it up there, but nice creamy feel, decent carb.

black and opaque, but not much head. aroma is a bit roasty and chocolately. taste is not as sweet as expected. medium bodied