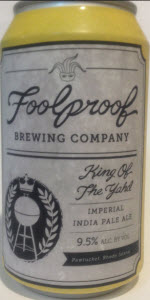 Notes: Pour a glass, brace yourself, and become King of the Yahd...

Meet the royal big brother of our beloved Backyard India Pale Ale. We've taken our IPA to the next level with this specialty beer. The King's got a big malt backbone - piles of pilsener, marris otter, rye, and spelt - topped off with a mighty crown of hops. King blends a selection of rare and delicious American and New Zealand hoops in 11 individual additions. So take a seat in your lawn chair and enjoy!

Your life. Your beer.

Poured into an imperial pint glass, formed a 3/4" beige head over the cloudy golden amber brew. Head keeps on keeping on, and sweet and citrus fills the aroma.

Taste starts sweet, quickly to the citrus middle, and more of the same through the close, with building bitterness near the swallow. Mouthfeel is smooth, and drinkability is good. Nice one.

Large, white, foamy head. It leaves a couple of spots on the glass. The liquid is amber with the slightest of hazes.

A bit earthy up front which leads to a dryness on the palate (and in the aftertaste). The hop comes across as peppery. The swallow and aftertaste are simply bitter. Good body with a decent level of carbonation. No warming alcohol despite the 9.5% abv.

If I were blindfolded, I would predict a darker color because of the earthiness to the taste.

Spicy, herbal and dank hops from a golden to amber beer with a bubbly white head that settles quickly. Taste has a formidable sweet caramel and cracker malt base with the bittering hops giving a strong showing on the dank and peppery spice side. Some herbal and tannic flavors too. Solid IPA overall.

A: The beer is a deep gold color, with a short off-white head that fades slowly and leaves a thick lace on the glass.

T: The taste starts out sweet with a strong floral hops bitterness followed by a mild citrus and caramel sweetness. The malt character is thin for the style but brings a decent balance. The after-taste is slightly hoppy.

O: Tasty, goes down easily, not too filling, good kick, good representation of style, this is a solid 2IPA to drink for a while.

There is something off in the smell on this one. Maybe malty charcoal, if that makes sense.
Slightly cloudy amber with medium head. Head fades rather soon.
Taste is a little to malty for my liking, but nothing bad. As with some double IPA's you can sense the alcohol in this one.
Poured to a pint glass from a can without date (too lazy to get up an look at the box).

Can from the Lazy Dog
Lightly hazy golden color. This has got to be the maltiest double IPA I've had in a long time. Not sure how old this can is but wow, where are the hops?

12oz. can served in my Maudite tulip. Pours a hazy burnt orange/carmel hue with a loose, quarter inch off-white head that quickly dissipates into a soapy slick across the center and coalesces into a frothy band around the shoulders. Nose expresses citrus, rind and caramel notes. Taste consistent with nose; however much more muted and the promise of the nose comes off a bit disappointing in the flavor profile - malt and hop bill don't really dominate; however, more carmel than anything else. Finishes with an earthy bitterness. Mouthfeel is light-medium in body (but closer to light), with a carbonation that falls just short of lively and a slight oiliness to the texture. Overall, a bit disappointing at the price point ($12.49 for a 4-pack). I want to support local brewers; however, I have to say that I'm pretty much done with these guys between what they are charging and the overall quality of the beers.

So glad to be drinking Damase's beers, and now to try his Imperial IPA, and a nice little homage to the Gonzo BBQ cookoffs (hopefully) with the little grill on the bottle.

Pours a decent foamy bubbly slightly creamy 1/4 finger head, not bad for the abv though, fades semi slowly too with a high water mark of lacing and some legs too, a quite hazy candy honey orange colored beer.

Nose is interesting and kinda unique. I get a decent malt character, a mild honey malt even, with a touch of a toasty grainy and even a little crackery malt, hint of candy too, and a little estery booze warmth with touch of papery yeast aroma. HOps are tehre, but not crazy, some mild citrus in there with touch of candied orange peel, a mild juicy fruit almost apricot like stone fruit, hint of what seems to be a big bitter hop base.

Taste has the same base flavors as the aroma but much more pronounced. The malts are still on the mild side, a little honey malt again, mild blond malt with little toasty and more candy like flavors, sweet juicy like malt, but not too sweet either. Booze comes in a bit with some mild warmth and hint of ester character, no yeast flavor at first, but then a touch of a papery yeast flavor later. Hops are decent, a hint of citrus and candied orange peel again, also more of that stone fruit, a juicy apricot, a bit of a fruit smoothie, hint of a tangerine like citrus but very mild, and hint of a spicy hop character. Bitterness is fair and plateaus quickly, no real ramping character. Finish however, dries a bit as it wasn't really sweet to start, but the drying really brings out the bitterness as it really ramps now, a nice spicy hop character with more citrus and a bit of a orange marmalade with orange peel chunks, little grainy cracker malt and strange honey like character lingering, hint of warming booze too.

Overall not bad, the hop characters could have been a bit more but the bitterness is right on, malts add a decent balance and not too sweet, nice malt character esp that honey malt flavor, the only real issue I found was that light paper like yeast flavor that is mostly background but often pops up to ruin the overall flavor a bit.

Poured from a 750ml. bottle into a La Fin Du Monde tulip glass.

The color is a orange/amber with some yellowish highlights. There is a big head on this beer with about three fingers of foamy white head and some nice lacing left on the glass.

The smell is pretty earthy with some of the Columbus hop aroma being present. The malts have presence here with as well adding to the earthy damp aroma.

The feel of this beer is a bit big. There is no denying the alcohol that weights here but does not take away from the drinkability of this beer. It's a pleasure going down.