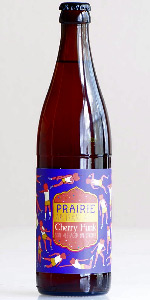 S: Tart baking cherries and a bit of funk. Musty grandma and fruit.

T.F: Sweet fruit and cherry. Modest tartness... certainly not sour. No real acidity, but some funk and barnyard to go along with the fruit. A bit of yeast and grape must. Dry towards the finish... well carbonated.

O: A very pleasant wild ale with cherry. Nice flavor and drinkability... not much in the way of pucker which isn't always a bad thing.

Reviewed by stephens101 from Oklahoma

Going back to the aroma we also find some notes of straw faint cherry, overripened light fruits and a humid basement mustiness.

Sweet light fruits and fruit pith on the palate with grain and a subtle cherry enveloping. Somewhat tart but not overly acidic and harsh in any way. A phew phenols are noticed in the finish.

Light and smooth and a bit o' spice from the alcohol lingers.

Prairie always makes sours I can get too and enjoy without downing tums throughout the entire brew. Some might call that lame/weak/wussified. I call it self-preservation.

3.75/5  rDev -2.3%
look: 3.75 | smell: 3.75 | taste: 3.75 | feel: 3.75 | overall: 3.75
A: Poured into a Duvel tulip to a reddish orange beer topped by a finger and a half of dense light pink head that fades quickly to a collar around the edge of the glass with some lacing
S: Smells of light juicy cherries with hints of sourness and some decent funk
T: Taste is very funky up front with notes of barnyard and horseblanket with some juicy cherry flavor and light sourness. Swallow is more barnyard, horseblanket and hints of band aids with a touch of sourness and lingering juicy cherry.
M: This beer is light on the palate but not watery with slightly effervescent carbonation that is a little prickly. The beer has a slightly drying finish as well which is expected.
O: Overall this one is interesting. I was expecting a little more sour and less funk but this one is quite aptly named. The cherry is a nice accompaniment to the base beer as well providing some nice additional complexity. Worth a try.

Distributed by the Shelton Bastards. 7.50% ABV.

HEAD: ~1 finger in height. White in colour. Okay thickness. Not much creaminess or frothiness. Fizzles out within a minute, leaving no lacing on the sides of the glass.

Not the best head I've seen in an American sour ale.

BODY: Pale peach-pink colour of average vibrance, with a nice understated glow and pink & red hues. No yeast/lees or sediment is visible within. Translucent. Nontransparent.

Appears undercarbonated. Not a unique or special appearance within the style, but appealing nevertheless.

AROMA: Faint powdery sugar sweetness, a trickle of muted cherry fruit, neutral supple pale malts, a kiss of sourness. Muted and reticent across the board.

A pleasant albeit restrained aroma of mild strength.

It's not sour (or funky) enough, but the cherry fruit is lovely and it's pretty well balanced (though its depth of flavour is shallow). Fairly complex, but not real deep or subtle in its execution.

Like the aroma, the taste is too muted and reticent, not committing fully to its flavours/ingredients. I do like it in spite of its flaws, but it leaves a lot to be desired.

TEXTURE: Supple, crisp, smacky, acidic, refreshing....this light-bodied texture is exactly what the style calls for. If only the flaovurs in this beer were fuller, deeper, and more intense, this mouthfeel would have something to complement and accentuate.

It's just soft enough, and rather approachable at that, but the taste doesn't bring enough to the table to match the quality of the texture.

OVERALL: Far from Prairie's best offering, but easy to drink and well worth trying. The price is quite high for the (relative lack of) quality, but it's a nice little sour beer. I do wish it wasn't so muted and withdrawn, but Prairie is a brewery I trust will develop its sour pogramme just as it developed its stouts and saisons. I wouldn't buy this particular beer again (especially at its high price - courtesy of the Shelton Bastards), but the supple texture combines well with the plump grapeskin notes and hints of cherry to wonderful effect. Hides its ABV quite well to boot.

Smell: Grainy, with funk, tart cherry; slightly lactic and littered with the barnyard

Taste: The grainy character lingers underneath, while the funk and lactic cherry tones build; there is a bit of a phenolic band-aid aspect that shows up as the beer warms; somewhat tart and oaky in the finish

Overall: I liked this more until the phenols became more pronounced but it is still a decent funky sour beer