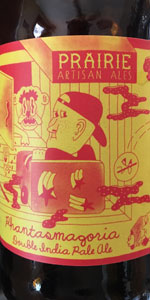 Notes: Phantasmagoria is an IPA that is low in malt flavors, but high in hops. We brew this beer as a nood to the big hoppy beers of the west coast. We use loads of citrusy and piney hops at the end of the boil and in the fermenter to make this beer a hop experience.

Rated by izraelc from New York

Reviewed by Gerald51 from Oklahoma

4.46/5  rDev +9.6%
look: 4.5 | smell: 4.75 | taste: 4.25 | feel: 4.5 | overall: 4.5
This came to me in a tulip glass and the first thing I noticed was the beautiful bright gold color and the smallish but foamy white head. A quick sniff was rewarded with huge notes of citrus, the aroma of Pineapple and I think I detected Mango in there but the scents were nearly overwhelming. I could have just sat and inhaled the smells forever but I was wanting to see if the flavor profile matched the scent and I was not disappointed. It had a sharp fruity citrus taste initially that was followed by a hoppy tart finish. It finished clean and refreshing with a very light mouth feel for a 8% strength beer. It tastes as bright as it looks and was very enjoyable. This will make a great thirst quencher in the heat of the coming summer !
Feb 26, 2021
Rated: 4.39 by tatecarson from Louisiana

holy bright citrus hops, batman - this thing reeks in the most pleasant way, with light and bright pineapple and herbal flourishes

bright tasting too - quite herbal shade of hop with an earthy tinge, and tropical citrus spritzing up the place nicely. I hear the "low malt" advert loud and clear, but missing the promised shades of pine. plenty of onion shade tho.

overall:
65% herbal hop, 35% citrus. next-to-no malt. maybe the herbal hop was mistaken for pine somewhere between the brewer and marketing, but pine is nowhere to be found, which was a letdown. could be an off batch, but based on other reviews I've just read before wrapping up, I doubt it. I'm not personally a fan of the herbal hop shade of flavor, but if you are, this is your beau, hands down. I can appreciate what it is, but am turned off by the discrepancy between what is and what was talked up on the label.

Reviewed by jwp777 from Oklahoma

Pours a hazy straw color with an orange tint. Looks like juice, honestly. The head is bubbly and starts about 1 finger thick but does dissipate quickly. Some lacing.

Smell is very citrusy with hops behind it. It smells bright, if you know what I mean.

Taste follows the nose and is exactly as described. Hops, pine, and citrus are high, everything else is quite low. Probably the lightest tasting 8% beer I have ever seen.

Mouthfeel is quite light bodied for the style, but get ready to feel the acidity from the citrus on your tongue.

Overall, not a good one to start with if you’re new to IPAs, but if you’re an IPA fan, there’s a lot to appreciate here. The bitterness is there, but it’s also quite light for such high ABV, so maybe a bit different than other IPAs around. I don’t know if it’s better, but it is different.

3.91/5  rDev -3.9%
look: 3.75 | smell: 4 | taste: 4 | feel: 3.75 | overall: 3.75
And now, for something CANpletely usual, we take you back to The CANQuest (tm), joined in progress! I have really been whaling away (in the hit, thrash or beat soundly meaning of the word, NOT the highly-coveted beer sense) at the Bottle Backlog here at Chez Woody. This CAN will provide a segue into a short horizontal which will lead once more back into the breach, seeing a return to the pesky Bottles! This one was purchased at Rieker Bottle Works & surfaced this afternoon.

From the CAN: "Phantasmagoria Double India Pale Ale".

I Crack!ed open the vent & beCAN a slow, gentle C-Line Glug into the awaiting glass. When I noticed that it was evincing a slight haze, I let it run freely at that point. It foamed up mightily to form two-plus fingers of dense, foamy, rocky, tawny head with good retention, leaving a load of lacing as it slowly fell. Color was a hazy Golden-Amber (SRM = > 5, < 7). Nose smelled more like pineapple upside-down cake than the "citrusy and piney hops" mentioned in the Notes. Hmm. Mouthfeel was Medium-to-fill, not quite creamy, but on the approach, on the light side for the style. The taste had an oddly-tropical & citrusy bitterness, somewhere between pineapple & grapefruit. Hmm. Not bad, but definitely unexpectedly different. The pine came though as a cool mintiness on the finish. Mmm. It definitely hid its alcohol well, becoming very dangerously drinkable. Finish was cool and dry with a pleasant, lingering mintiness. I found myself in quiet CANtemplation upon finishing it. It was rather mellow, almost tea-like, but I'm not sure that I would want CANother. YMMV.

Reviewed by beersampler6 from Michigan