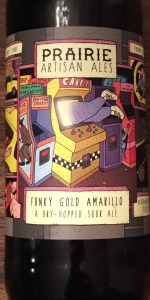 Notes: Funky Gold Amarillo is the second beer in our dry-hopped sour ale series. We took our sour golden ale, Gold, and gave it a heavy dosing of Amarillo hops. The result is a beer that is a mix of tropical fruit and Prairie funk. Notes of peach, orange, white wine, and citrusy brett can be found in the flavor and aroma.
View: Beers
Reviews: 76 | Ratings: 605 | Log in to view all ratings and sort
Reviews by LanceH:

I'm still relatively new to sours. This is an initial rating. I want to revisit this one at a later date.

Funky Gold Amarillo pours a golden-straw color that hinges on cannery brightness. But its strong hop and yeast haze gives a milky appearance as its swath of foam casts cottony aspirations. The ale tingles the nose with tangy citrus notes, pepper and a faint sulfury whiff, but its first sip is bready, lightly sweetened with confectioner's taste and a reinforced tropical, citrus medley.

With the taste beginning its dry trek early, the hops begin to project. Their grapefruit, pineapple and orange flavors bounce off of the ale's natural lemon, lime, cider and tart white wine influences in seamless fashion. Fleeting sweetness and breadiness leave room for the earthen taste of burlap, cobweb and brine to give the fruit a weathered, dried or musty character.

Softly bitter, the medium-light ale feels lighter on the palate due to its playful acidity that gives the beer a wine-like feel. As the character of flint and salt trail, so does a return of those sulfur flavors to ensure a 'funky-fresh' overall taste. Funky Gold Amarillo- looks like Tone Loc has more work to do!

Poured from a bottle into a snifter, the beer is a hazy, opaque, sunflower gold coloring with a fluffy, bubbly, off-white head. Aromas of pineapple, melon, apricot, and orange rind, with subtle sour notes, tart grape must, some floral esters, and a cracker backbone. The smells have some definitive white wine characteristics in there. Flavors are tart and sweet forward, with a solid sourness that puckers you up a bit. Pineapple, lemon, orange rind, and subtle melon sweetness all blend together nicely on the toasted backbone. Floral hops provide highlights, as well as an underlying bitterness that combines with the sour and slightly acidic characteristics to make this an extremely dry, crisp beer. The aftertaste is more of the citrus and tropical fruit sweetness, but with a solid dose of the white grape must that provides a tart component. The finish has a sweet linger on a dry, crisp feel. This is a very well balanced, robustly flavored beer. Nice!

Wow this was so delicious.