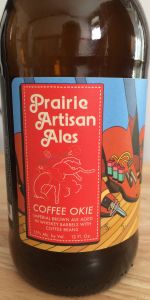 Bottle shared by Dave. Cheers and thank you!

Reviewed from (very) long-standing notes. Poured from the 12 oz. bottle into an El Catador Barrel-Aged glass. Purchased locally in December 2015, and consumed in December of 2017.

A: Rich brown, but certainly brown rather than black. Nearly opaque. Forms a one-finger dense creamy tan head, with lots of small bubble carbonation running up the sides. This is very pretty.

S: Really nice here – rich coffee, vanilla, oak, and whiskey. Some dark mocha. Toasted malts and mild toffee. The whiskey is in nice balance with the other flavors – it's definitely there, but at a level to allow the others aromas to take the lead. Just a hint of barrel char and whiskey spiciness, plus more bitterness from the roast (though I don't know if the roastiness is from the malts or the coffee...or maybe both). Very nice and balanced. I'm not sure you could ask more on the nose from a barrel-aged coffee brown ale.

M: Full-bodied, as long as you remember it’s a brown ale rather than a heavy porter or Imperial Stout. The whiskey flavors are integrated though obvious, and I do find this a bit warming going down. Carbonation sensation is on the low side, despite the plethora of bubbles on the appearance. It’s not flat, and while it accentuates the creamy mouthfeel it does seem a little low to fit the beer.

O: Very good. I don’t think the flavors were quite as good as the nose, but it’s still tasty. While not sickly sweet, it’s certainly malt and whiskey forward. For personal preference, I think I would have liked a bit more bitterness, whether from the coffee roast, malt roast, or hops – or maybe even the wood from the barrel to come out a bit more. But enough quibbles - it's certainly quite good as it is. Scores given to style.

This pours a ruddy brown black with thin lacing. Nice aroma with notes of French roast and whiskey barrel. There's a bit of a boozy sting. Thin bodied, surprisingly, with a nice lingering heat. Had this with some age on it, but it was hard to read the exact bottled date.

Very little head production, and correspondingly no retention to speak of. Body is a fairly clear dark brown body.

Nose is mostly coffee and whiskey fighting for dominance, while tones of oak, brown sugar, toffee, and caramel hide in the background like children watching their parents fight. And just like a classic parental spat, there's no hiding the influence of booze on the nose.

Much smoother on the palate, with tons of whiskey, red grapes, brown sugar, and coffee; around mid-palate, brown sugar, toffee, and caramel really take over, giving this a sweet character that it rides to the finish, accentuated by the whiskey mash.

Remarkably smooth; for all the booze on the nose, this massive beer is lively and supremely drinkable on the palate. It's boozy, but like the lies of the devil, it sucks you in with honeyed words (I'm not a big boozy brew; I'm just like a sugary toffee bar!) and flattery (oh, YOU can take this brew, you big MAN you!) until it's too late. And oh, it's too late ... by the time you recognize that 13% WILL knock you on your ass (or should, you lush), it's too late; you're grasping for your water, but it's so far away on the desk across the room, and after all the carpet is soooooo comfortable.

Flavor: Noticeable barrel again, malt body with slight coffee on the finish. Sweet and smooth. Not boozy at all, (shockingly at 13%?!).

Mouthfeel: Thin. Elements of tartness on the palate, but not especially tart flavored. Warming down the palate and down the chest as well.

Overall: Super nice sipper. Highly drinkable for the ABV. I will let this one rest at room temp for a while to see if it
continues to open up.

Appearance: A clear dark brown colour with a thin tanned head that dissipated quickly and left only sparse to no lacing.

Overall: A nice sipper, maybe a touch on the sweet side, but still great on a cold day.

look: Hazy orangish brown. Modest tan head on the pour that mostly recedes. Sparse but messy lingering lacing.
smell: Coffee is aggressive and great. Caramel, toffee, and vanilla bourbon from the base Okie hold their own.
taste: Very much like the nose. No hint of booze.

Pours opaque near black with a thin beige head that quickly disappears completely. The smell is of caramel, coffee and subtle barrel notes. The taste follows with caramel, cocoa, coffee, vanilla, a hint of nuttiness and faint barrel. Medium texture with low carbonation. Not as much coffee as I expected, this comes across more like an English barleywine.

Base beer is present. Some slight coffee and whiskey. Not super strong. But nice.

Excellent taste. Silky base beer and the whiskey compliments it perfectly. Wish I did a side by side with FW bravo. This might edge it. It has that great prairie touch I love.

Creamy mouthfeel. No complaints. Alcohol is present but not overwhelming.

Overall a great beer. Not quite AB noir level imo. But a great showing as always.

Flavor - Wow this thing has an amazing flavor, big rich coffee, sweet toffee, dark chocolate, the whiskey is a little stronger in the flavor but it is perfect and does not overpower any of the other flavors.

Feel - Full velvet feel, warming very smooth. There is a slight burn from the alcohol but no where near the 13% ABV this thing packs.

Overall - A very well done beer, the taste is amazing you can taste every flavor and they are all balanced.

An exceptional American brown ale. One of the best beer I've had from this side of the Atlantic. Definitely world-class. Prairie products are a tad pricey but totally worth it. Cheers!

Rich caramel & dark roast coffee bean flavors up front; whiskey & oak notes on the finish. Mild raspberry notes emerged as this warmed. A bit boozy for me but otherwise right up my alley.

Coffee Okie from Prairie Artisan Ales
Beer rating: 95 out of 100 with 448 ratings