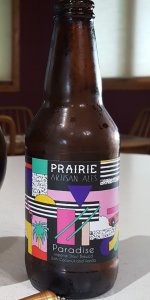 S: Vanilla, coconut, and cocoa plus roast and espresso.

O: An outstanding big boozy Imperial Stout. Great cold weather beer... a sipper, and they packed a lot of flavor into this 13% monster.

4.76/5  rDev +11.7%
look: 4.5 | smell: 4.75 | taste: 4.75 | feel: 5 | overall: 4.75
Absolutely the best stout that I have had. Hands down. I absolutely love bourbon barrel aged stouts and typically they are all pretty similar and are hard to tell apart from each other. However, Paradise stands out! The coconut on the smell adds another dimension that is unlike any other. It comes through on the taste a little bit as well.

No head, very little to 0 lacing.

Smell is quite boozy with notes of vanilla, leather, and caranel, with some roasted character coming through. A light sweetness throughout. Rum, burned sugar. Coconut aroma is almost like a mounds bar dipped in vodka.

Taste: not as boozy as the aroma, but quite complex and sweet. Coconut is more evident here. Toasted coconut mostly, then comes caramel and burned sugar. Roasted malt, rum, vanilla extract, coffee. Hints of mounds bars covered by booze and coffee. A lot going on here, but all quickly covered by stronger notes.

Overall this is one complex beer. Fun and tasty for one drink, but probably just a one time thing for me.

Reviewed by AmeriCanadian from Tennessee

The look was almost flat, but it is a pitch-black liquid which is what I was looking for.

And the nose is gigantic and evolving, with massive amounts of coconut, vanilla, dark fruits, dark chocolate, molasses, charred oak, toffee, tobacco — everything you want from a barrel aging. But the sweetness is obvious right away.

On the tongue, the sweetness starts to overwhelm, with massive sweet vanilla first, then chocolate covered cherries and berries, then Milky Way and Mounds chocolate bars. It’s plenty tasty, but unbelievably boozy and sweet. First few sips were fun, but the last few weren’t enjoyable. Oddly, the tasting notes fall off really quickly at the end, leaving a mild syrupy sweetness and little else.

Pours black. Soft brown head1/4". The aroma puts down a heftier degree of vanilla than it does coconut. Roasted grain is probably in the middle of the two.

Taste wise, you get something approaching but not quite breaking the barrier of entry into pastry stout land. The vanilla almost gets you there, the coconut is pretty mild, but they both make for a smoothing experience that keeps the roasted malt from taking on acridity or a bitter mouth feel. Additionally, this is pretty easy to drink for a 13% beer. Vanilla really do be like that. Also has a chocolate feel to it. Like I said, pulls up just short of the sugary free throw line. This one is shooting from the top of the key. Oily but welcome texture to the body.

Might be a good desert beer when you don't want your beer to rival the sweetness of your actual dish. These are good, but when you're around that $1/ per ounce price point, you better be. Don't think I would venture after this unless I found a good deal on it.

3.84/5  rDev -9.9%
look: 4.25 | smell: 4 | taste: 3.5 | feel: 4.25 | overall: 4
Very decent stout, but not my favorite of theirs. I was really hoping for more of the coconut to come through, or more of a pure vanilla flavor, but what you really get is a caramel flavor that pretty well dominates everything else. Super smooth, and the alcohol is very well hidden as per usual with them, though, so overall it's very drinkable- just not exactly what I was looking for- especially at their price points.
Jul 30, 2020

For starters: Bomb! is world-class, so this is being held to a very high standard. And I drank Speedway last night, so I’m calibrated tonight.
With that in mind, this is wanting. The first sign of trouble was the pour, where no amount of rigour could rouse a head - that’s bad no matter the ABV.
The nose warns of the ABV, but otherwise has not much to offer. On tasting the vanilla is faint, yet there’s also not enough roast to clean up the dessert cart flavours. If I concentrate, the heat and brown sugar combine into something that could be called bourbon, but as easily be marshmallow. In other words: where's the vanilla?
I’ll score it well for Taste, just because there are so many flavours, but this has to rank as a letdown. Only the burn cuts through everything - combined with the flatness, this is almost more like a liqueur.

Prairie play in the big leagues, so by that measure, this is hot, thin, and vanilla-less.

Reviewed by DanO1066 from Maryland

Rated by BoodahMoogle from Arkansas

Just an absolutely pleasant stout, and the 13% makes it perfect for quarantine.

4.33/5  rDev +1.6%
look: 4.25 | smell: 4.25 | taste: 4.5 | feel: 4 | overall: 4.25
12 oz. bottle.
Moderate pour yields a medium to dark tan head over a black body with some lacing. Nose of dark malt, dark chocolate, vanilla, and coconut. Taste is more vanilla and coconut and finishing with bitter chocolate. Alcohol is definitely there! Nice feel and overall, a very pleasant after dinner dessert beer as in my case, or, it would be a great Sunday brunchy kinda thing with pancakes or waffles.
Cheers to Prairie Artisan Ales for another gem!!!

4.61/5  rDev +8.2%
look: 4.5 | smell: 4.75 | taste: 4.75 | feel: 4 | overall: 4.5
And now, for something CANpletely usual, we take you back to The CANQuest (tm), joined in progress! I have really been whaling away (in the hit, thrash or beat soundly meaning of the word, NOT the highly-coveted beer sense) at the Bottle Backlog here at Chez Woody. This CAN will provide a segue into a short horizontal which will lead once more back into the breach, seeing a return to the pesky Bottles! This one & the next were both purchased at The Beer & Beverage Shoppe on Roseville Road.

From the CAN: " Imperial Stout Brewed with Coconut and Vanilla".

This was one of the more spendy CANs that I CAN ever remember purchasing so I wanted to savor every moment of it, beginning with the Crack! of the vent. I was pleasantly surprised my a light spritz across my fingertips due to its being a brimful craft CAN. They overfilled on THIS beer?!? Holy Baker's Dozen, Batman! I had to position the awaiting glass for the Glug, vice the other way around, so as not to lose even a single drop of this precious fluid. As such, I did not get much in the way of head & even a vigorous in-glass swirl failed to raise much more than wisps. 8=( Color was obsidian Black/Opaque (SRM = 44), not only allowing ZERO light penetration, but acting as a black mirror, reflecting on my soul. 8=O Nose was redolent with especially coffee and Baker's chocolate laced with coconut & vanilla. Think a liquefied Mounds bar! 8=O I have said before, I dig coconut & I always have, but it isn't everybody's bag. J/S. Mouthfeel was medium-to-full, not quite creamy, but on the approach. This was passing strange since it seemed light for the style. I let it roll around in my mouth & on my tongue to warm a bit, having just come out of my admittedly cold reefer. If I thought that I got chocolate & coconut on the nose, I REALLY got it in its taste! Phew. My first swallow left me with a pleasant tingling from my esophagus to my belly, reminding me that this is no playing around & to take it slow & easy. Finish landed in the Twilight Zone between Semi-Sweet & Semi-Dry. Phew.

Well now, as if that weren't enough of a jump start to the day, I also scored a Bottle (Eeek!) from Tavour before we parted company. They were a good service, but their local delivery agent was an inflexible pain-inna-a** + I just felt like it was all adding to the backlog & so I stopped doing business with them.

From the Bottle (!): " Imperial Stout Brewed with Coconut and Vanilla".

As I finished the last of the CANned version, whose ratings appear as my official version since CANs trump all, I readied a fresh glass for a Pop! of the cap. Once accomplished, I gave it an aggro C-Line pour into the awaiting glass. I watched in rapt fascination as it first evinced a pseudo-Cascade, followed by the brief formation of a fizzy finger of bubbly, deep-brown head that quickly faded not only into wisps, but simply an oily skim atop the beer. 8=O Color remained obsidian Black/Opaque (SRM = 44), reflecting my soul in its black mirror. 8=O Nose retained its scent of a liquefied Mounds bar. Mouthfeel was slightly fuller than in the CANned version, but it still seemed thin for the style. The taste was comparable to the CANned version, so fair dinkum. Finish was samey-same as from the CAN.

Not an appreciable difference between the Serving Styles, but for me, if there is a choice, I'm going with CAN. Just pour it into a glass.

3.84/5  rDev -9.9%
look: 4 | smell: 3.75 | taste: 3.75 | feel: 4 | overall: 4
12oz bottled 3/28/19. Opened 4/11/20.
Huge 2 finger tan head with very good retention...falls slowly down to 1/4" and hangs tight there. Black Imperial Stout, no light or color change to the edges. No lacing.
Fudge brownie, thick and rich with chocolate and roasted malt flavors. Maybe, maybe some coconut - no vanilla perceptible - those aromas have faded at 1 year. Still a bold imperial stout aroma. Some dark fruit.
Fudge, dark chocolate, roasted malt.
Full body and medium carbonation. Velvety and rich mouthfeel. Long malt-full finish along with a little heat of the 13%. Off dry in the finish.
Very good.
Need to catch this one earlier in it's life cycle to assess the coconut and vanilla aspect, at 1 year it's not existent.

An amazing 5 out of 5 looking pour that is dark brown to near black with a full brown colored head that fades down quickly. No light penetrates this baby.

The aroma is just spectacular. 5 out of 5 again with an array of characters including coconut, vanilla, dark roasted malts, floral notes and absolutely no booze for 13%.

Bold mouthfeel but a little on the effervescent side. Still nice.

Sweet roasted malts, coconut, and vanilla define the flavor with no alcohol to speak of here either. This is so soothing and warming - it relaxes me. A slow sipper but well worth it.

Rated by bubseymour from Maryland

Reviewed by Msp004 from New York

4.49/5  rDev +5.4%
look: 4.25 | smell: 4.5 | taste: 4.5 | feel: 4.5 | overall: 4.5
Light carbonation with an above average body. Has a creamy dense feel
Aroma is coconut, toasted coconut, roasted malt,black coffee,mocha candy,biscuits and cookies.
Mildy sweet but far from cloying. Has some kind coffee bitterness. Otherwise it totally resembles aroma.
This is by far my favorite from prairie and ranks high to me compared to other beer in this category