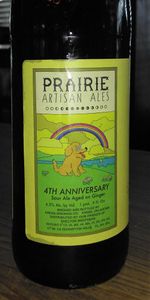 L: dark gold with plenty of amber in it, not quite copper but darker than gold; clear with hundreds of bubbles everywhere ... some of the bubbles are bunching and stopping about mid-glass ... the overall number is incredible, as many bubbles as I've seen in a beer; 90% clear and clearing ... in fact, it's hard to say if it has a mistiness or if all those bubbles are giving it a misty look because it's hard to see through them; pushes up relatively small head, about 1/2-inch of white foam; keeps a thick collar and most of thin skin; no sticking and little lacing, but short of having sticky foam, this is as cool a show as I've seen in a while

S: can smell fruit or something sweet as you pour it; lemons ... sour apple .. very sour but relatively "clean" with nothing overly funky or earthy, just a ton of lemon; the ginger punches through at times; hints of fingernail polish/remover, but over time that seems to be the ginger coming through, not a standard "sour" note found in a lot of American-made farmhouse/wild ales; sweetens as it warms and has a ginger beer aroma

T: quite sour and almost bitter to begin, very earthy/dirt bland flavor pervades, then the sour takes over, loads of lemon, like the nose a "clean" sour, maybe just a bit of wet hay or horse blanket; as it warms and as your palate adjusts, the ginger mixes in more and more until it becomes an equal note side-by-side with the sour lemon juice; earthy bitterness shows up often and balances a sweetness that is almost fruity ... sour apple

O: great beer and another cool twist by the good brewers from Oklahoma; if it were summer I'd run out and grab another bottle or two ... in fact, I might grab one and see how it handles a few months sitting in the fridge; the ginger works very well and is deftly used -- the ginger aroma and flavor show up over time without overtaking the notes from a very good base beer; hard to say where the sweetness is coming from (malt? ginger? something "wild"?) but it helps tame down the opening dirt-earth blandness and gives it a nice mix of sour-ginger-sweet notes