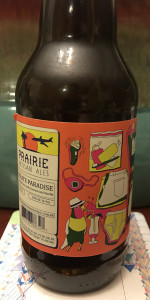 L: Pitch black with almost no head.
S: Rum and vanilla.
T: Touch of coconut, but mostly roasted flavours, vanilla and warming rum.
F: Thick and chewy, some heat from the alcohol.
O: A very pleasant beer that showcases that bourbon isn't the only barrel for a stout.

Nose: 4 - all barrel, basically no adjuncts.

Taste: 5 - yeah, not quite all barrel, but it dominates. The coconut and vanilla are there, but complementary.

Mouth: 5 - thick and smooth. Sticks around for a long while. I'll need to brush extra tonight.

A thing of beauty.
One of those beer that I could smell all day. It's so complex and gourmet on the nose.
Pitch black on the eye,
Cocoa, rum, vanilla on the nose, very powerful and complex.
A lot on the vanilla in taste, a bit roasted. Very balanced.
The mouthfeel is velvety.
Glad I shared this with some good friends but sad that I had only the one.

Tasted on tap at New Bohemia on 2/29/20. Not sure what year this is but had been wanting to try this one for some time and I was not disappointed. Very tasty.

From a 12 oz. bottle into a PAA Pirate whiskey glass, this beer pours out with a blackness and forms a pinky worth of caramel colored crown that doesn’t stick around long.

The nose brings botanical rum notes mixing with some marshmallow like vanilla, a fudgey chocolate and a hint of coconut.

The taste brings huge vanilla. Thick marshmallow sweetness mixing with that fudgey, silky chocolate and the botanical rum along with a kiss of coconut. There is somewhat of a graham cracker aspect that bounces in and out as well.

There is a warm barrel booziness that lingers the whole way through. Silky, sticky, full and widely thick with a coating sweetness.

Overall, this is an enjoyable beer. The amount of vanilla that comes through is phenomenal to me. The coconut somewhat gets lost with the rum botanical notes, but can be detected as an accent. What’s crazy is the vanilla marshmallow, sticky sweetness is huge from the start but only comes on more and more as it warms.

I hate this beer. I just paid $10 for 1 12 ounce bottle of it and that would be fine if it was great but I hate it! I usually love dark beer. Even in the summer I'm ordering whatever porter or stout is at the bar. This one is all wrong. It claims to be vanilla coconut. I dont taste either. It just taste like any other dark beer but with an awful hard to swallow bitterness. I'm so annoyed with this beer right now. If it hadn't cost $10 and if it was 13% alcohol (something I didn't realize until after I bought it) I'd have thrown it out already.

Batch 1 that Ive been holding onto for a while. First thing I noticed was the strong vanilla aroma. Very strong, in a very good way. Has a fudgy,vanilla, taste w a strong after taste of toasted coconut. And has ABV hidden well. Overall right on par w bourbon paradise. Prairie might be making the best stouts right now .. Alongside w Toppling Goliath. Damn do I wish I could get this often.

Two of my friends recently put together a share to help me out after my bottles were stolen at Dark Lord Day. I told them it really wasn't necessary, but that seems to have even motivated them more! So we ended up drinking several top 250 beers, which is always exciting for me - I was stunned that they managed to grab a Pirate Paradise though. I'm a very big fan of Bourbon Paradise, and a huge lover of Prairie beers in general - this was certainly a wish list item!

So, it's a little odd to say that I was slightly let down by Pirate Paradise - particularly as difficult as I'd thought it was to find and procure. Strangely, it seems that bourbon seems to complement the base beer much better - which is exactly what I would not have thought. Rum and coconut beers are some of my favorites - so why didn't this one work quite as well for me?

That's probably not exactly a good or accurate statement, honestly, because Pirate Paradise is a damn good beer - but where Bourbon Paradise is almost TOO thick and sweet, this beer falls just a little short in those categories. Rum in the nose and the taste are pleasant, but it's definitely a bit thin in that. I'm also not getting the coconut and vanilla to nearly the same degree as in Bourbon Paradise. Quite surprising, I know.

So while I like Pirate Paradise - I can't help but review it in the long shadow cast by Bourbon Paradise.

12oz bottle, served in a stemmed glass. Pours a thick, oily dark black body, one finger white head, short retention, not much in way of lacing. Smell is sweet rum, vanilla, sugarcane, milk chocolate, a bit of sweet coconut, cocoa. It's mildly boozy, but rum is more or less always that way. Flavour is chewy milk chocolate, cocoa, a bit of sweet and oily coconut, more milk chocolate, a smooth and extended run of rum throughout, with a smooth, mild vanilla sweetness lingering on the backend. Mainly it's vanilla and rum mingling together on the backend, which is rounded out by a slight cocoa-like bitterness. Mouthfeel is full bodied, substantial, lower but still appropriate carbonation, mildly boozy rum on the finish. A very good barrel-aged adjunct stout that isn't quite pastry stout level but it's an excellent stout in its own right. Probably one of the few rum barrel-aged stouts that I have really enjoyed. I do agree that this one is a step up above Bourbon Paradise as the rum seems to work better with the adjuncts than the bourbon.

A: Viscous black with a thin ring of fine, dark brown head. Decent retention and no lacing.

T: Spiced rum in the forefront with light toasted coconut (lighter than on the nose), vanilla bean, a bit of cola and roast, with moderate bakers spices on the backend. Medium sweetness pulls things together.

O: Delicious! The barrel is nicely integrated and the coconut and rum are both super tasty.

Very dark appearance with tan slight tan head. Aroma is malt with vanilla and coconut. Taste is also a coconut and vanilla with a slight rum taste with a significant alcohol aroma. A little more aging would help.

S: Large amounts of rum at first pour. As the beer warmed some of the rum aromas gave way to some sweeter smells. Vanilla, chocolate, and coconut become more noticeable as the beer got closer to room temperature.

T: Very nice balance of rum flavors mixed with multiple layers of dessert like tastes. Similar to the nose, the beer is very heavy rum and molasses in the beginning before somewhat dissapearing to give way to sweeter flavors. Nice amount of vanilla and chocolate mixed with some coconut as the beer gets warmer.

M: Thick full mouthfeel. Many sweet dessert like beers become too cloying here but Prairie did this one right with the addition of rum. Very full flavored and warming. The ABV is obvious while drinking and afterwards but somewhat subdued due to the coconut and vanilla.

O: Remarkable beer. Only negative is the lack of head or lacing. One of the best beers I have had regardless of style. So many beers in this style go overboard with sweetness but not here. Nice balance of alcohol and sweetness.

Beautiful rum soaked brownie batter. No booze. The best beer ever, even though it doesn't taste like beer. Truly sublime. The absolute best liquid I have ever tasted or smelled, and it's not even close.

A fantastic variation of the tried and true BOMB! I might rate the 2015 Pirate BOMB! over the Paradise, the Paradise does beat the 2016 Pirate handily.

Look - pretty much pitch black, decent lacing, very little head, some flakes floating around that are either coconut or consistent bubbles. i say coconut. :)

Smell - coconut potent for sure. nice milk chocolate, hint of vanilla and oak

Taste - the balance here is incredible. All of the flavors are strong but also subtle at the same time. The Bomb! base comes through nicely too with a tasty hint of spice from the peppers. The rum barrel is so subtle that my dislike for rum barrels doesn't come into play while drinking this. Really incredible flavors.

Feel - creamy for sure. Not overly thick, but a very nice and smooth mouthfeel. No booze whatsoever.

Overall - lives up to the hype! All I can say here since this is an extremely hard beer to acquire. No disappointment whatsoever and may even chase again. Nice work Prarie!!!

Poured from a 12 oz bottle into a yellow/orange prairie Dino glass.

Pours a deep brown body with a light brown head that reduces quickly to leave a ring.

Aromas of strong coconut and vanilla, run and milk chocolate.. this is straight chocolate covered coconuts.

One of the best stouts I've ever tasted.. this is a real vanilla coconut stout, kills prop 13

Easily the best from Prairie yet. Jet black, with minimal head that disappears very quickly. The vanilla coconut rum nose and flavor last throughout the entire beer, and the mouthfeel is thick and lasting. Must try!