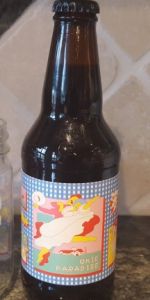 Notes: Imperial brown ale aged in Whiskey barrels and blended with an imperial stout aged in Rum barrels with toasted coconut.
View: Beers
Reviews: 11 | Ratings: 80 | Log in to view all ratings and sort
Reviews by Fireman_RK:

L: Dark onyx and mocha hues with a thin sandy head and a few coconut floaters
S: Upon cracking this beast, toasted coconut filled the room. A bit of rum, bourbon, and cacao nibs round out the nose
T: Milk chocolate, toasted coconut, pecans, and a bit of sweetness from the rum; as an aside, I had a small taste of coconut floaters in my first sip - nice added crunch
F: Pours a bit thinner than I'd hoped, but the taste presents a decidedly thicker and pronounced beer
O: Wow. From the first sip this beer was a standout for me. Absolute coconut bomb with a twisted complexity from the bourbon and rum barrels. The blend of beers provides a welcomed depth - I actually enjoyed this more than Pirate Paradise. Awesome.

Bottle. Dark brown color with coconut floaties in the glass.

This beer has a massive rum soaked coconut flavor going on. Chocolate and fudge with vanilla and caramel. The whiskey shows, but not as much as the rum. The rum and coconut meld so well together. Huge barrel presence. Oak and spiced rum. Some molasses and dark fruits/raisins/fig.

Medium to full bodied. Only complaint is that it isn't thicker, but I understand it was part imperial brown ale which isn't very thick.

Very impressed with this one. Exceeeded my expectations by far.

Dark color with no head bu coconut floaters. Nose is bourbon/whiskey with some toasty coconut. The taste is all toasty coconut and a beautiful way. Feel is a little thin. Overall an imperavly good beer.

Pours black as night with less than a wisp of head that fades in seconds.
The aroma is coconut right up front. Tastes of cocoa and coconut are dominant
with rum sweetness and hint of bourbon heat. The mouthful is off putting for
some but I think it is spot on. This is one of my favorites from Prairie.