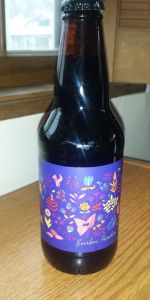 Notes: Imperial stout aged in bourbon barrels with coconut and vanilla
View: More Beers
Recent ratings and reviews. | Log in to view more ratings + sorting options.
4.48 by TP2MSU from Michigan on May 08, 2022
4.49 by Affinity from Missouri on May 05, 2022

Appearance - The beer poured thick blackness with brown bubbles clinging to the sides of the glass.

Taste - Initially, the dark chocolate led the way. It was like a bourbon barrel aged Mounds bar. The chocolate and coconut worked so well together. The sweetness of the coconut was most prominent in back. The bourbon made for a warming finish.

Mouthfeel - The body was thick with roasted chocolate. Carbonation was largely non-existent.

Overall - This was a great coconut stout.

Vanilla, barrel char, bourbon, roast malt, and a hint of tobacco, molasses, cocoa, and toffee in the nose.

Intense palate entry - all of the flavors above but concentrated. Rather sweet, with a long chocolate-laden finish. Some barrel/alcohol elements along with a gentle, clean bitterness add a little balance. Stewed dark fruit notes emerge as the ale warms. Neutral yeast character. Coconut and vanilla seem a little redundant, overwhelming their counterparts in the bourbon flavor, and reinforcing the borderline cloying impression.

More on the dessert end of the spectrum for the style, but very potent with some balanced barrel influence. Enjoyed it more than my notes might suggest.

Little to no head. Only a very thin tan ring clinging to the glass. Very dark like dark chocolate cake. The nose is chocolate and more chocolate. Bourbon comes right out of the middle of the chocolate. Vanilla and barrel leak out at the end. The taste has bourbon, vanilla, and oak jumping right out. Chocolate and a small hint of coconut follow. There is a small bit of spice that hides behind the coconut at the finish. The mouthfeel is a bit thin but with the right amount of carbonation. This is a wonderful beer. It wants to be too sweet but stops just short and balances out to make you smile. (Found old notes on this one)

Pours pitch black with a finger of fizzy, dark mocha, almost reddish head that fizzes away almost instantly. When swirled, it coats the glass with a dark film.

Aroma is light coconut and even lighter vanilla as expected from the extended aging. This allows the base stout and barrel to shine more. Dark chocolate, black cherry, tobacco, roasted malt, some peat, and molasses from the base and some charred oak and bourbon from the barrel.

Taste brings more of the adjuncts than expected given the aroma, but they're still quite light given today's "pastry stout" standards. Toasted coconut and light vanilla bean dance in the background while the barrel treated stout is at the forefront. Bakers chocolate, some bittersweet chocolate chip, roasted malt, some peat, tobacco, black cherry, some fig, molasses, some brown sugar, charred oak, bourbon spirit. I'm sure there's some vanillin and even possibly some coconut coming from the barrel, but it's hard to tell if that character is from the adjuncts or the barrel.

Medium to high medium body. Slick, oily, sticky, warming. Could use a bit more body. Doesn't drink like 16%, but you know you're drinking a big beer.

I know I shouldn't have sat on this as long as I did because I'm sure there was a lot more coconut and vanilla character; however, the base and barrel integration are top notch and allowing the adjuncts to subside has shown this. It also has led to what I'd imagine is a smoother drinking experience than when it was fresher. I'm sure a fresher version of this would meet my expectations more, but this is still a very enjoyable beer at where it's currently at.

Wonderful brew. So far, my favorite.

Poured a black body with minimal head and touch of lace patches but those quickly dissipate. The aroma is mostly booze to me, although some sugariness comes in as well so assume this is vanilla. Smooth beer, kind of buttery it's so slick, with a hot and boozy taste and feel with vanilla sweetness but also some slickness from hints of coconut. Real easy to drink for a slow sipper and there is a good amount of chocolate throughout the beer that balances well with the vanilla and coconut.

Nothing wrong here, but its an unexceptional take on the style - that said, yes - you get bourbon, you get vanilla, and you get coconut, too - high-abv stout body with appropriate chocolatiness and coffee - maybe I'm just jaded - this 12 oz. bottle was $9.99 IIRC - Prairie being notoriously high-priced (right? lol) - so in sum, you get what they advertise, but to my tastes it doesn't do anything with the ingredients that elevates it above peer drinks, or to justify the price... Fans of vanilla and coconut BBA stouts will absolutely dig this though...

Too much upon the first sip. Of course, after the initial shock your taste buds acclimate a bit. But overall, this ale goes too far with is coconut, vanilla, and sweetness. Thought the barrel-aging contributes to these faults I do not believe that’s where the mistakes were made. 3.5

A – Pours an opaque oily black, viscous with zero head. Syrupy. An alcohol “wedge” (not legs) on the glass. 4.25

S – Sweet, vanilla, bourbon barrel, coconut is on the faint side and seems to be overwhelmed by the other aromas. There are some roasted aromas as well, but behind everything else. A very complex aroma. 4.0

T – Coconut!!! Sweet. Alcohol is well hidden. No bitterness. Sweetness is a combo of the coconut and the brown sugar flavors. No spiciness to balance, just the ABV. 3.5

Pours pitch black with a dark tan head. Fits the style perfectly, IMHO. The nose is led by the bourbon, but it’s surprisingly not too hot, and there’s a really nice vanilla note to accompany the dark chocolate and char notes, and there’s maybe a smidge of coconut.

Dark chocolate leads the taste, accompanied by the bourbon, and balanced by the vanilla and a more substantial coconut flavor. This is hefty and brawny, yet also well balanced, something that requires a lot of skill from the brewery in my experience. Prairie definitely has that skill set.

The mouthfeel is rich and slightly creamy, well suited to the beer. I really liked the base beer - a LOT - and this is better, IMHO. World class stuff here.

Overall: Like bourbon? Yeah, plenty of that here, but it's a malt bomb. Very sweet, dense, almost brownie like. A good one to share or sip slowly.