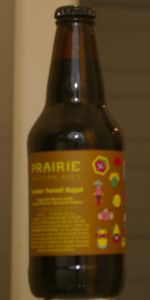 Well now, as if the previous beers weren't enough of a jump start to the day, I also scored a Bottle (Eeek!) of this one from Tavour before we parted company. They were a good service, but their local delivery agent was an inflexible pain-inna-a** + I just felt like it was all adding to the backlog & so I stopped doing business with them.

From the Bottle (!): "Imperial Stout with Peanut Butter Roasted Coffee."

I was anxious to Pop! the cap on this one as it was all starting to catch up to me. I may need a nap after all of this. Once accomplished, I simply let it fly in a free-running C-Line pour into the awaiting glass. It evinced a pseudo-cascade that formed a brief finger of foamy, fizzy, rocky, deep-brown head that quickly fell to wisps. Color was Very Dark Brown to Black-Opaque (SRM = > 34, < 44) with garnet highlights at the edges. Nose smelled imprecisely like peanut butter & more like roasted/roasting peanuts.

When I was a lad, we had a fellow who roasted peanuts at a small Art Deco (!) stand downtown as well as El Capitan Roasters, not far from where I live now. The latter was mainly coffee, but they would/could also roast peanuts.

It is such a pleasant smell, as opposed to roasting/roasted chestnuts, I am pretty hearty, but that is one smell that will make me gag. They taste good, but that smell just evokes my gagging reflex.

Onward! Roasted/roasting peanuts & coffee on the nose. Check! Got it. Mouthfeel was bug, thick & creamy, like a dollop had been scooped into my mouth & onto my tongue. The taste was like a melding of two of my favorite flavors - deep, dark-roasted coffee & peanut butter!

Do you like P.B.? We had a spirited debate in my classroom once. Smooth v. Crunchy. A fave student, who happened to be a hardcore gangbanger, but respected/liked (?) me inadvertently ended it with "Crunchy! 'cause I like the feel of nuts in my mouth, yo!" I had to step out to keep from laughing as the classroom erupted. He fully owned it though & it became a running joke.

This had a kind of green peppery tang, as I believe that someone else noted. Not at all off-putting, though.

Dateline: USS Normandy (CG-60) as we were volunteered (!) by our overzealous skipper to transition from the Red Sea into the Persian Gulf! USS Princeton (CG-59), same hull-class, same capabilities, had just sussed out a floating mine & needed relief.Okay, kids, with two (2) gas turbine engines & a rooster tail, do you think that the ponderous, oil-burning boilers of the re-supply ship could keep up? NO! We were a day (or two) from UNREP & now, we would be bereft until we got (at least) into the Gulf of Oman! I was a MT501 (50-cal) gunner in 8/8/8 & when I came down from the 02-level the last morning before our rescheduled UNREP, the Mess Decks were empty. In the Salad Bar was a #3 CAN of peanut butter, a #3 CAN of sliced jalapeno peppers (in light oil) & a freezer-burnt loaf of white bread that had been "discovered" when the freezers were defrosted & emptied! With a sign reading "Self-Made PB & Jalapeno Sandwiches! Help Yourself".8=O I toasted two slices, assembled a sammich, slipped by my rack for a stogie & headed to the fantail for breakfast & a smoke. I would have died for some coffee & many were.

Wotta beer! Enjoyable throughout with its unending coffee & peanut butter melding presence. So many flights of memory, so many digressions, but so it is. Finish was semi-dry & I just kept licking my lips as I reminisced on my shipmates.

Crazy ship, but lifelong shipmates. I salute all of you on this quarantined morning!

12 oz bottle from De Bierliefhebber webshop. Pours a pitch black colour and a decent brown head with pretty good retention. Aroma's of ground coffee and peanuts, blending surprisingly well. Retronasal it's peanuts, a bit sourish (?), firm roast. Flavour is light sour, roasted. Alcohole feel is moderate. Medium bodied. Nutty and sourish finish. Surely not how this is supposed to be?

Peanut butter up front and all around. The coffee is kind of hard to find even as it warmed. Roasted and nutty. Chocolate and cocoa. Kind of fudgy.

Decent, but not worth the $8 price tag.

Sweet and strong. Thick and gourmet.
This imperial stout by Prairie Artisan Ales is hug alright but a firm and strong one.
Still a delight even if it's with artificial flavors added

Served in a red wine glass from the bottle.

Smell: I smell sweet caramel and coffee. It feels like a touch of toffee strong but light.

Taste: very complex a touch too sweet but you get used to it with subtle peanut and espresso tones. Sweet brown sugar to compliment it it becomes very addicting, not sure if lactose sugars were used in this beer but it feels like it was subtly fused with it.

Mouth: medium carbonation with a super full body and it comes off a very sticky.

Overall: what an absolute gem I absolutely would buy it again feels a little bit like Prairie Bomb minus the spiciness. Like a chocolate peanut butter cheesecake liquefied in a glass topped with raw crushed espresso bean. Salud!

From the Prairie folk in a bottle and in a snifter. This taking a risk brew
for me (I'm allergic to peanut butter---makes me break out in hives sometimes---sigh)
pours an oily pitch black with a nice head of brown foam that settles to a thick
ring, thin light pool, and shows some light lacing. Nose of rich peanut butter
and dark cocoa syrup with deep char and roast notes. Not a lot of
dimensions, but the dimensions that it gives are excellent. Flavors
follow the nose with rich nutty peanut butter, medium to heavy char,
dark coffee, and dark cocoa that mix exceptionally well. Very
nice mouth feel; full body, moderately slick, smooth, lightly
warming, and a roasted malt, cocoa, and peanut butter
forward finish,

Excellent brew, wish I could have more, but this 1/4 glass
is enough for me and risking some problems-----
ahhhh---the things I do for BA!

O - Very solid. The peanut butter is a nice addition to the dark chocolate and coffee. Alcohol is very well hidden.

Rich milk chocolate, peanut butter and coffee in both the aroma and taste. This is thefirst beer I've had which absolutely nails the peanut butter. I've had several before that kind of did it, but this one does it best - and by a considerable margin. Well worth the price tag per bottle (12.99))

This beer pours black and is topped with an inch of deep mocha head that leaves decent lacing.

The taste is more chocolate and coffee. The peanut butter comes through in the aftertaste.

Full bodied with a smooth mouthfeel

I compare all coffee and peanut butter beer to the fine examples that Willoughby has set with Nut Smasher and Peanut Cup Coffee Porter. This beer pales in comparison. It is not bad, but as long as I have Willoughby, all others have a steep hill to climb.

Powerful and taste is excellent!