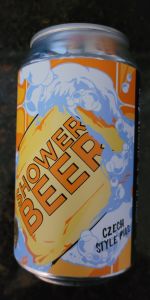 Notes: Perfect for any relaxing occasion, this Bohemian Pilsner sings with fresh, clean maltiness and spicy flavor and aroma contributions from 100% traditional Czech Saaz hops. Aged cold on Lager yeast for weeks for maximum refreshment. If you've never had a Shower Beer, it's high time. Winner of Gold Medal in the Bohemian-Style Pilsner category at the 2015 Great American Beer Festival.

The CANQuest (tm) is in high gear these days! I am watching sports programming as we approach the sweet spot of the year when baseball begins its postseason, football ramps up, hockey makes its reappearance (with the World Cup as a bonus this year) & the heat & humidity of the summer becomes a thing of the past. I also dig the Fall colors, Hallowe'en, pumpkin pie, apple cider & maize mazes.

From the CAN: "Czech Style Pils"; "Perfect for any relaxing oc[CAN]sion, this Bohemian Pilsner sings with fresh, clean maltiness and spicy flavor and aroma [CAN]tributions from 100% traditional Czech Saaz hops. Aged cold on lager yeast for weeks for maximum refreshment. If you've never had a Shower Beer, it's high time."

Some people adhere to the adage or CANbination of adages - "Save water, drink Beer. Save water, Shower with a friend." Ho hum. Here at Chez Woody, we save water like a Champion! I drink Beer while in the Shower with at least one friend! Rubber duckies & other acoutrements available & welcome. Extra soap at the ready for the well-endowed. We like everyone to leave here squeaky clean!

The Crack! was more like a squeak due to a rubber duck included in every CAN. Ever had Balut? Kind of like that. I CANducted a gentle Glug to give the duck a ChANce to escape. Once order was restored to the chaos, I did an in-glass swirl to raise just better than a finger of dense, foamy, bone-white head with good retention. Color was another oh-so-slightly-hazy Yellow-Gold (SRM = 4 - 5), but I am willing to chalk it up to chill haze. I keep my in-roto beers in the reefer, which is kept pretty cold due to the food also housed there. I hate to blame the brewery when the causation is of my own doing. Nose smelled great! Mown hay & grass drying in the sun near a pepper patch while biscuits fresh from the oven cool on the sill. It was like my maternal grandparents' house as a kid with the upper lot, the lower meadow and the surrounding farmland. Mouthfeel was medium, but VERY soft! It was like the Virginia water had been run through a water softener before beginning the brewing process. I could have lived with a little more hardness, actually, but what a minor quibble. This beer was a reminder of why I was able to transition away from my beloved AIPAs to (some) lagers about a decade ago. I like to be able to taste hops & when I was put onto the idea of Noble hops, especially Saaz, it was like the scales fell from mine eyes! The taste was very hoppy, but in a grassy, peppery/spicy way and gently underlain by the biscuit malt. German Pilsners tend to rely more on the malt, making them sweeter and less desirable to me. This was CANtastic! As it warmed, the clarity improved as did the intensity of the hops. It began to take on a pronounced pepperiness as the grassiness faded. Finish was dry, spicy & quite refreshing. I CAN fill a cooler with this, have some friends over & run the shower for a while.

Poured from a 12 OZ can into a pint glass. This beer is a crystal clear light golden color with a minimal white head. The taste is a nice hippy flavor. This is much stronger than the aroma. A pretty good beer that has a great package in the can.

Hazy pale yellow with two fingers of lasting bright white head. Bready malt aroma with a dry, powdery-yeasty smell to it, and some light floral hops behind. This continues to the taste, with a flash of corn-like malt sweetness up front and then some moderately strong bitterness and a touch of Saaz spiciness on the back end. Light, pillowy mouthfeel, with low carbonation. Not as crisp or grassy as I prefer in a pils, but still not too shabby.

Served on tap in a pint glass
Appearance – The beer is served a crystal-clear golden color with a small fizzy white head. The head fades quite fast to leave just a trace of foamy lace on the sides of the glass.
Smell – The aroma of the brew is mostly of a grainy smell mixed with some sweeter aromas of caramel and a touch of harvest fruit. Along with these smells comes a touch of grass and hay.
Taste – The taste begins with a rather crisp and clean flavor of lightly toasted malt and some sweeter caramel flavors. At the start there is a little bit of a apricot taste as well as some light but nice herbal hop tastes. As the taste advances the caramel grows a bit stronger all while the herbal hop gets a tad stronger as well. With a touch of grass joining at the end, one is left with a rather nice slightly sweet, but crisp, pils taste to linger on the tongue.
Mouthfeel – The body of the brew is rather light and crisp with a carbonation level that is on the higher side. Overall the feel is rather nice and makes for a super easy sipper.
Overall – A rather nice and flavorful pils with a low abv. A good session style brew!!

Tight carbonation, nice head fades but not too quickly.

Aroma of bread and a bit of hop - typical pils.

Light body, maybe a little light for the style but nice.