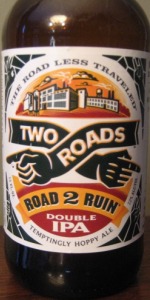 Received this on a trade and man is it good! I have no idea why the ratings are so low on this one (when did low mean high 80s, oh well, so it is!).

Appearance: Looks like apple juice, I am changing up my description nice light foamy head lays upon the top as you drink through it. Fairly clear but has a nice reddish gold hue to it.

Aroma: Pretty light but nice tropical fruits and hops are the dominant flavor profile. This one smells like a lot of highly rated beers but is probably much easier to get. I still don't get the lower ratings.

Taste: Nice tropical hops, smooth taste, very reminiscent of Jai Alai or some of those that are more juicy and balanced than bruising hop bitterness.

Overall: I still cannot figure out the lower ratings, this is a very solid beer and I greatly appreciate the opportunity to try it. The photo shows a bottle but this one came in a tallboy can! Love that!

Probably my newest favorite beer, although I have been drinking it for well over a year now. Locally we have been seeing very fresh bottlings on the shelves. (30-40 days old) and the flavor increases greatly because of it.

Not boozy at all, but the high abv is definitely there after a few are knocked back. Pairs well with Highland Park 10yr SMS.

Bear with me here, as we don't get a huge selection of West Coast IPA in my neck of the woods, so I can't compare to Pliny or the like, but these "fresh bottlings" definitely boost this DIPA from my top 5 IPA's to #1, over the likes of Flower Power, Hop Stoopid, and Dogfish 90min IPA, and leaves anything I've had from Sierra Nevada in the dust. BUT...bottle date matters with this brand...anything outward of hitting the 90 day mark and it's back down to just average.

30 day mark and I'm picking up more than just run of the mill citrus...getting some mango up front and the crispness factor doubles IMO.

Poured from the 12 oz bottle into a stemmed tulip.
Pours a clear medium amber color with 1.5 fingers of head.
Smells insane. Huge hoppiness in the nose with tons of tropical fruit.
Taste is delicious. Tons of fruit, sweetness, good bitterness that lingers. A good deal of malt that is reminiscent of west coast IPA, but this has way more hop profile.
Finishes a bit sweet from the malt.
This beer I feel is underrated on BA. This is delicious.

Pale gold color with a half-inch head. Mango, grapefruit, and sugar aromas, but not all that strong. Nice tropical fruit and citrus combo (pineapple, grapefruit, orange rind), with a light sweetness coming through from the malts, like a British biscuit. There's some hop bitterness but no more than your average IPA. Mouthfeel is intriguing--slightly chewy, but not thick or juicy. Nice dry finish.

I was curious to try this Double IPA because of the light malt backbone, hoping for some extreme hop action, but with the hops lacking zing, I missed the malts after all. An enjoyable brew, but not nearly as tasty as their Two Juicy NE IPA. (Bring back the Two Juicy!)

Looks good, smells great but stop right there. I expect to be overwhelmed by Hoppy heaveness, but it just wasn't there.it is a good beer, better than average.

Pours a gold with a touch of honey color with a two finger head that has decent retention. Upon break there is a nice cap and collar and some lacing is evident. The smell is big hops, piney and pithy. There is also a nice malt finish. Taste is like the nose, in that the hops dominate. There is a nice pithy bitterness that comes to me first, followed closely by the pine, and the whole thing is capped off with a nice amount of malts that make for a nice finish. The feel of this beer is medium bodied with medium carbonation and a dry finish.

This is a nice DIPA. I don't think it sets the world on fire by any means, but is a nice beer that I would happily enjoy again (and again).

Quite possibly the best IPA I've ever had. A must try.

Pours slightly foggy, with a deep golden hue and one finger of loose, frothy white foam that dissipates over the course of the next 2-3 minutes. A bubbly, frothy collar endures, alongside a sponge print-patterned swath of sticky lace. Looks typical for the style, and the aroma is similarly emblematic of a DIPA - rather fruity, with pink grapefruit and orange being immediately apparent. Minor hints of apricot, pineapple, and some floral, herbal, slightly dank hops manage to provide some added depth.

A decent DIPA, though at a 'mere' 8% it does drink a bit more like a standard (albeit stronger than average) American IPA. The pale malt backbone barely even registers - there's some light caramelized malt sweetness, but beyond that it's nothing but hops, with Cascade and Summit hops sitting in the driver's seat - their pink grapefruit and orange citrus flavours are quite potent, overshadowing hints of apricot before leading into an assertively bitter back end. Citrus pith is soon overcome by an earthy, resiny, slightly floral hop bitterness that persists through the finish and lingers into the aftertaste. Medium-full in body, with moderately low carbonation levels that lightly swats at the surface of the palate; it's got a slight bite to it, but still has a relatively smooth texture that makes it easy enough to knock back.

Final Grade: 3.91, a B+. Two Roads' Road 2 Ruin will get the job done... but the DIPA category is a highly competitive one, and I don't think R2R is distinctly better than most of the domestic equivalents. Let me be crystal clear: this is in no way a 'flawed beer'; it just kind of blends into the crowd. At $3.75 per tallboy, there are only a few DIPAs in this province that I would consider to be better value, but none of them require committing to a 4-pack. That being said, Ontario hopheads should still consider this brew to be well worth trying while it's relatively fresh, and with any luck we'll see a few more Two Roads products being brought into LCBOs in the near future. Cheers!

This beer from Two Roads was my first introduction to a Hop DIPA. Its rating here on the BA seems somewhat slighting....RTR has a great aroma and a great hop-malt mix taste. As I grade the lacing , it doesn't leave a lingering ring in your glass so I give it a SLIGHT deduction. BUT it has a golden color to go with the the smooth hop flavor and kick make it a great Friday after work "settling in" brew. It is Two Roads number ONE seller.and is now available in grocery stores as well as shops in CT so there is always fresh RTR on the shelves. The Road 2 Ruin is always in my fridge mix.

T---Citrus is in the forefront, orange and grapefruit. Pine is less noticeable than in the nose. Malts are there, giving it a nice balance, instead of being a hop bomb.

F---Medium body. A bit creamy from the maltiness. Alcohol isn't noticeable, which could be a problem as it's 8.0% (not strong for a dipa, but strong for a regular beer).

O---I don't think this would qualify as most people's idea of a normal dipa. It's still very good, though. I'll keep an eye out for it again.

473 ml can served cold into pint glass. Cost was approximately $3.50 CDN per can.

Appearance - pours a clear rich golden color with orange hies. Half a finger of semi frothy white head is poured and modest retention ensues. Not much lacing and plenty of visible carbonation.

Smell - lots of tropical fruit with pineapple and grapefruit being most dominant. Some notes of orange as well. A certain earthy darkness sits underneath.

Taste - similar to these nose, with extra grapefruit and orange peel shining through. Some earthiness here and resin, but a little more tropical overall.

Mouthfeel - smooth, medium to heavy bodied, carbonation is middling and overall the beer is just a little bit sticky. Booze noticeable in the back of the throat.

Overall - a solid DIPA that I'm glad was able to try, however it doesn't really set the world on fire. Still a solid offering for a reasonable price.

16 oz pub glass.
Golden.. almost clear. Mildly foamed, settling to a nice layer that retains well. Smell of light malt, rich citrus and what I sensed was a good dose of pine on the nose. Taste was really even for a DIPA.. in that nothing was too strong. The prickly feel was balanced between from first to last drink (see below).. with the bitterness easy going.
Nothing was over-the-top trying to grab my attention. One thing I did find odd, was the first few smells/drinks had an odd aroma of mild mildew, but that was gone after my 2nd or 3rd drink.. replaced by malt? Still learning...

On tap at Shadrach's at The Heritage in Southbury, CT.

Appearance - Served up in a pint glass, this brew is crystal clear and purely golden in color with a white, half finger width head. Decent retention, then breaks down to a thin layer of suds across the surface. Lacing is small and spotty with fair stick.

Mouthfeel - Full bodied with moderate carbonation. Smooth going down before a semi-dry finish.

Overall - Very good, solid DIPA. A little too much pine for me to love it completely, but I could drink it quite often.

2015-09-02
12oz bottle brought from Manhattan by @mr-jj. Clearly, readably, and noticeably dated bottle tells me this beer was bottled on 06/22/15, so it's ~2.5 months old. Borderline for DIPAs, in my experience. Some are still awesome, and some are not. So we shall see. Poured vigorously, so most sediment made it into the tulip.

Pours hazy light amber with a small head and medium carbonation. Smell is piney hops with a little citrus.

Mouthfeel is medium and clearly effervescent. Overall, not exceptional, but quite good.