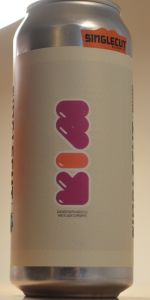 Notes: The hallmark of our lager experimentation. Bright, vibrant, lush, a sour made for pint glasses and icy coolers.

We sour mash wheat malt and lager for an extended period with our house strain, finally adding whole hibiscus flowers and a touch of black current, creating a vibrant rose hue and incredibly aroma. Notes of dark fruit, floral tannin, bright lemon, and a touch of sweet wheat.

Had on draft a few years back in the taproom.

This review is from the recent mass production and distribution of KIM bottles.

Very average and off putting. Not much flavor or balance.

Very weak in both color and mouthfeel.

Seems watered down compared to when I tried it in the taproom, way back when.

Certainly not worth the $.50 per ounce for the cost of the bottles.

I'm usually a huge fan of Singlecut products, but this one in mass distribution is very subpar for the price point.

I fear that Singlecut is misusing their namesake to cash in on inferior quality products.

Wow! If you drink sours, hello and help your summer cool down whether at the beach partying in the Hampton's or grinding the day out in the city streets. Wine drinkers with their chilled whites, chablis, or rosé need to get a clue. Not the "Colonel Mustard, with the Candlestick in the Lounge" but the kind of clue that put this at the top of the must be drinking at all summer occasions kind of clue.

Single Cut once again puts pride of brewing to the forefront and delivers the very best in each category.

More high quality brew from this up and coming brewery from Queens, NY.

Welcome to the start of my Happy CAN A New Singlecut Be All The Beer That It Takes To Make Me Happy On A Sunday (Week 724)?!? It is to be a CANcerted effort to drink, review and rate some beers in the furtherance of The CANQuest (tm) while also taking part in NBS. As always, thoughts & opinions expressed are not necessarily my own. Stamp help out!

From the CAN: "Rulpsen says: 'Come visit our brewery!"; "Brewed with Hibiscus and Black Currants"; "SingleCut Beersmiths is proud to maintain the American tradition of beer locally made from craft by zealots/lunatics who believe hard work, truth, pride and passion should always come before profit."

It was identified as "unfiltered" so I did some in-CAN agitation before CANducting the Crack! I was pleasantly surprised when it briefly formed just over a finger of fizzy, foamy, rocky, pinkish head with low retention. Color was a slightly-hazy light-pink (SRM = N/A). Nose smelled very much of hibiscus & I wish that I could tell you that I like it as an adjunct, but no such luck. Mouthfeel was rather thin & watery. The taste was more tart than sour, but the acidity actually worked to hold the floweriness of the hibiscus in check. No syrup would be needed in/with this one & either/both might act as a detriment. It was light in terms of hibiscus, but high in pucker factor. Finish was quite dry. This would be a great, refreshing beer on a hot, humid Summer's day.

Poured from a bottle into a Dogfish Head tulip

O: Smells great but a bit too sour to be easily drinkable. Solid flavor but over the top. One that grew on me after having it a few different times.

Bought this at the SingleCut Brewery a while back and finally had a chance to sit down and sip it tonight. It's a bit cool out for this but regardless, this was a fun beer that was quite different from the northeast-style IPA's that I've become accustomed to from them recently.

Loved the pour to this as the beer had a grapefruit hue, frothy head, and a murky, dank look to it unlike anything I've had in a long time...if ever. Strong tartness, hibiscus, and SingleCut's house yeast were in the nose with all of those being in the taste as well. More of a burn from the black currant than anything I could discern on my tongue while there wasn't any booze to be seen or felt. Some grapefruit and lemon could be felt here as this was quite citric and tart with a nice, juicy mouthfeel to this. Quite thin, carbonated enough, and addicting, I enjoyed this for what it was even though the heat of the summer is no longer part of this year.

Though I only bought one bottle, it would be easy to have another once this was polished off. While not even close to their best offering, I give them props for going outside of the box and taking a stab at this style. It's not good enough to win anyone over but feeling the burn in the aftertaste and seeing how easily this went down served as proof that I'd have it again, even if it was just to remind me of warmer days ahead!

So, from the dudes at Singlecut, this is "pretty much" a Berliner Weisse, in a kinda sorta way.

Pinkish hue on a golden colored brew. Flavor is superb, and I am not throwing that word around lightly. The level of sour here is so perfectly even-keeled and level, I can't really think of a better way for it to go. Light hibiscus tones don't get obnoxious at all. Drinks beautifully. This is one of the best beers I have had in a very long time. I am a fan of the sours, and I will try a Berliner Weisse anytime, but I feel I am not being biased in saying that this is an extremely good beer, mostly due to its smooth tone and that it's put together evenly, without trying to be obnoxious or over the top.

Glad I went out of my way for this one. +1 redemption point for an otherwise lame and too quick of a trip back to NYC.

A: The beer is hazy light rosé in color with no visible carbonation and somewhat resembles peach juice. It poured with a thin white head that died down and left lacing on the surface and a thin collar around the edge of the glass and eventually completely faded away.
S: Light aromas of sourness are present in the nose along with slight hints of hibiscus.
T: Similar to the smell, the taste is slightly sour and has hints of hibiscus flowers.
M: It feels light-bodied and slightly tart on the palate and has a light to moderate amount of carbonation.
O: This beer is very easy to drink and has some refreshing properties. It would make for a good selection on a hot summer day.

The beer offers a good combination of green apple and lemony tart with lots of floral and a light crackery malt.

A light and crispy sour, without too much on the palate and good for the ABV.

I bought this pint can at the Beer Temple. (Glad to see more NY micros braving the Illinois ABC.)
Refreshing and balanced (which is not easy for a BW as they tend to get too tart for me.)
A high pour makes Kim a pretty redhead in a red dress. Smells are more subtle, but a nice blend of fruits. Tastes are tart; but blend the fruity aromatics with a nice wheat malt; yet the lager's cleanness stays throughout... a nice touch that I'm guessing restrains the sour. Finishes dry and satisfying.

Starting SingleCut in 2012 and dedicated to hoppy beers, these Beersmiths show their versatility and craft in this sour lager. I've always wondered why a city of two million (Queens) exports so little beer to the Midwest. Now, they have no excuse. Send us your best.

9/25/19 Had second can and Kim actually goes well with Indian food. Calms the palate.