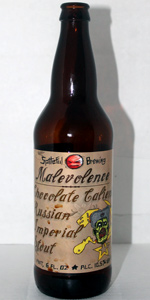 Pours dark black with almost no head and what head there was dissipated quickly.

Smelled strongly of cinnamon and spice - very pleasant and spicy. less noticeable, I picked up notes of chocolate.

The taste and feel were surprising. This stout is very very dry and almost powdery. I can only describe it as it tasting like the beer was brewed with powdered cinnamon. I found it hard to drink because it was so noticeable. There were some notes of chocolate and chili but not as noticeable.

Overall this was an ok stout - I'd be curious if it mellows over time. Not my favorite - there are better examples of this style out there.

Out of nowhere, Spiteful drops their answer to Abraxas on us!

Dark with a light caramel head, the smell is strongly of cinnamon. Taste is similar (STRONG cinnamon taste), with a good amount of bitterness from the cacao nibs. The peppers in the beer bring everything together and add a pleasant spice to the aftertaste.

This is awesome stuff from Spiteful. The best comparison I have is if you were to take Abraxas, turn up the peppers very slightly, and turn the cinnamon to 11. Not quite as balanced, perhaps, but in some ways maybe even more delicious. Fantastic job by Spiteful--I recommend picking this up ASAP, as I would imagine this will become impossible to get as soon as people get their first taste.

One final, important note: As mentioned above, this beer DOES have some spice to it, so if your stomach is somewhat delicate (despite loving spicy food, mine sure is), the chiles thrown in here might give you a little bit of a digestive pain. Worth it though!

Appearance: The most powerful gusher I have ever encountered; before the cap was halfway off, the liquid sprayed from the bottle like a fire extinguisher and, before I knew it, half the contents were lost; as is often the case, the remaining liquid poured into the glass like a cowering puppy, with no head other than a few bubbles around the edges of the espresso-colored liquid

Smell: Chocolate, hot pepper and cinnamon forward, with a hint of vanilla bean

Taste: Chocolate and hot peppers emerge with the cinnamon rounding out the front end; through the middle, a hint of vanilla arrives, but the finish has a moderate amount of heat to go along with the strong chocolate fudge and cinnamon tones

Mouthfeel: Full bodied with low carbonation; some heat in the gullet from both the ABV and the hot pepper

Overall: Despite my disappointment with the carbonation. this is a tasty beer that produces just enough heat to blend with the other adjuncts

Much better than the BA version at FOBAB.
Black body, a ring of tan foam and spotty lace that subsides quickly.

Aroma is more earthy chile forward, with a vanilla sweetness and light cinnamon presence. Much more integrated than the BA version, which was basically liquid chocolate red hots.

Taste is full of bitter chocolate, chile earthiness and mild heat, cinnamon lingers in the aftertaste. Creamy and full bodied, alcohol is expertly hidden. Overall a great beer, especially if you like chile infused chocolate.

The beer comes in a oily black color with a brown film coating the inside of the glass during the swirl.

The flavor offers a medium base of cinnamon, onto smokey and earthy pepper flavor. With a theme of molasses, chewy roasted malts, an intense mouth coating viscosity, rounding sweet vanilla, a bitterness of cocoa nib onto dark chocolate,