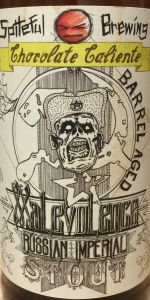 Outstanding. Very similar to BA abraxas. Might be even better. I couldn't quite give it a perfect 5 but it is really close. This is a must try for anyone like pepper adjunct BA stouts.

Ever since trying the original version, I've wanted to see what a barrel-aged version would do to a beer that I thought was already excellent, and an Abraxas competitor.

The answer to what a barrel does to this beer: Essentially perfects it. The spice from the original is toned down and the bitterness hidden, and the strong cinnamon flavor is integrated into the beer better.

This was in my top 3 at Stout Fest, and my girlfriend's overall favorite. Barrel-aging takes what was already a great beer, and eliminates what I would think most would consider its potential flaws (acidic spiciness and cloying cinnamon). Very impressive beer by Spiteful, and one that holds its own against the top tier BA stouts.

God Damn Delightful Day 2016 batch - Still a delicious beer, but seems to be slightly less sweet (and maybe a little thinner) than last year, to its detriment. I'd almost like to see Hostile Harry given the BAMCC treatment, because it's fuller and sweeter, and might do some great stuff with the Mexican hot chocolate flavors. Either way, still an excellent beer, just not an all-time great like I thought last year's was.

A Damn Delightful Day 2016:
Rich and creamy feel, cinnamon is more balanced and integrated with the other elements.
Fudgy base stout with ample barrel notes of toasty oak and vanilla, mild chile heat integrates well with cinnamon than lingers in the aftertaste. Great stuff, much more balanced than the last batch.

FOBAB 2015: 3.78
Disliked this one due to the heavy handed cinnamon, it tasted like red cinnamon hard candy.
Base stout was obliterated and the finish was dry and boozy.

black body with thin cap of head. Smells of bourbon, chocolate, peppers, and cinnamon. Taste is much the same. The flavors are extremely well integrated together. Bourbon is mellow yet flavorful. This beer really tastes great when it hits room temperature that is when the mouthfeel is really oily and the beer super smooth. I bumped the overall score because of how well the nose, flavor and mouthfeel work together. This is the easily the best spiteful offering that I've had. The non barrel aged version was also quite fantastic as well.