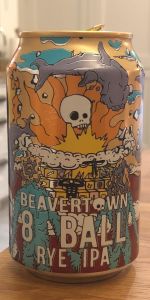 Poured to a BrewDog snifter.

A: Body is coppery with great crystalline look. The head is white, 2mm thick and with great retention.
S: The aroma is very interesting having a hint of earthiness, spiciness, clove and a very plain and still robust hop.
T: Taste starts off with a minor citric touch of tangerine and blood orange, then moves on to a spicy tone before reaching the green grassy hoppy tone of a more old school hop strain.
M: Body is medium to low. Carbonation is spot on. Bitterness is medium high and alcohol is unnoticed.
O: What a great rye IPA. I need more of this in my life.

Welcome to Beavertown, population: some shirt-wearing pants-less dude, a guy with a red cape, and seagulls according to the can label. Weird as bro. So you (dear readers) all probably know one of my beer reviewing bugbears with rye beers - lacking any rye character - I’m not going to waste your time explaining this, well, yes actually I am: when you write the word “rye” on a can/bottle, there is on my part a preconceived notion that said beer will in fact - taste like it has rye in it. I’m sorta weird like that I know, but I’ve tasted countless beers over the years that say “rye” on the label yet they lack any rye flavour. Fingers crossed for Beavertown! [this last sentence is a contender for my most bizarre comment of 2017]. This better be dripping with spicy/earthy rye goodness.

Poured from a 330ml can into a nonic pint.

A: Not as red bodied as expected - more of a coppery-tinged orange, with a beefy off-white cappuccino foam head on top. Fairly murky body overall, it’s all coming up trumps (not in anyway an endorsement for a certain President) here. 8/10.

S: Ooo, fruity, earthy, floral with slight tropical (think lychee/jackfruit) hop-forward characters going on here. Not much in the way of pepper/spice, but the bouquet as a whole is quite sweet and moreish with a fragrant floral body. In other words: I approve of smelling this beer, here-here! 8/10.

T: Sweet tropical lychee (with jackfruit hints) come to the fore, along with an earthy/biscuity centre, a slight floral late-palate, and a finish that is orange rind bitter with a slight peppery note. Yep, there’s your boy rye - bringing up the flavour rear guard. The resulting flavour is definitely in the realm of American Red Ale/IPA, and it’s done well without showing off/being flashy, I like it. 8/10.

M: Mouthfeel is a bit less bodied than it needs to be - almost medium, but not quite there - they almost had it - a bit of lactose would have pushed it up IMHO, with a denser/creamier mouthfeel as well. As it is the carbonation is alright, a little flat nonetheless. 6/10.

D: Pretty decent first beer I’ve had from Beavertown, I feel like I want to go there, and yet it also feels strangely familiar, like I’ve been there before. I guess that’s just the Beavertown way. Regardless of my blatant innuendo this is a tasty Red IPA, one that, while it doesn’t come too close to Modus Former Tenant, it does satisfy my hop-lust somewhat. Quite floral too - I like floral beers. 8/10.

Food match: I’m going to drop the V-bomb on this: Vietnamese!

From a 330ml can.
L: Pours a hazy, dark amber with orange edging. A massive, long-lasting, creamy, off-white head leaves sheets of lacing.
S: Aroma is plums and rye.
T: Juicy, overripe, tropical fruit hops plus spicy rye flavours. Light bitterness.
F: Smooth, medium-bodied, dry finish and a creamy mouthfeel. Leaves behind a bit of heat at the back of the throat.
O: Plenty of bitter American hops plus a hefty dose of spicy rye. A smooth, almost creamy, nicely balanced RyePA with a hot, dry aftertaste.

To be honest this is a fairly generic, though undoubtably tasty IPA. My unrefined palate can't identify any uniquely rye characteristics but plenty of luscious tropical fruit and a pleasant mouthfeel. Eminently drinkable but ultimately unremarkable beer. In short, nothing wrong with it but nothing particularly special either.

Pake-brown colour pouring with medium head.
It has a pleasant flowery smell, characteristic to an American IPA.
The taste is not very uncommon, although the rye alters the classic IPA feel. Very light bitter aftertaste.
Overall a pleasant, good beer, which it doesn't really stands out though, as expected.

Good session ale. The oily citrus hops go well with the spicy rye. It's definitely an american IPA but it has some english ale characteristics. It's crisp. Better without the yeast

Taste: Unfortunately taste not as pleasant as aroma. We've got modern hops, bittering in the finish and only very slight evidence of that spicey sweetness coming through up front. The hops really are dominating this one.

Overall: Disappointing. Like so many of these craft IPA / rye-PA brews, unbalanced and one dimensional.