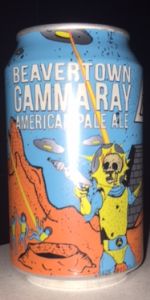 Looks are average, but I give extra points for the tripped out art on the can.
Smells tell me mostly malt, some fruity hops doing their thing.
Tastes are fine, nice interplay of hops and sweet malt. But as the can finished, so did the nice play and the hops' bitterness decided to stay.

My first from Beavertown, so I went on their website. And I must say that they certainly seem to be having fun. But I hope that doesn't get in the way of their succeeding in an increasingly competitive market. At any rate, good luck!

L- Rather like cloudy Tango into a 1cm white head which holds very well. Ok, perhaps not quite a dayglo orange as Tango...
S- Wham! Guess that's me getting hit by the UFOs laser, this beer smells, from even a foot or two away! A pungent citrus/mandarin orange/orange blosson aroma.
T- Dry and hoppy on the front, some citrus in the middle [citra hops perhaps?], clean and fresh into the finish, and finally a bit more mandarin orange tang.
M- Probably about as crisp and refreshing as a 5.4%ABV beer could be
O- Very characterful, very distinct, I can't see a drinker of this confusing it with anything else. Neither could I see this as a session beer as there is so much going on ... for me one of these is enough for a session before progressing to less complex propositions.
Canned: 19/7/18 > B/B 19/1/19
The art on the can is pretty far out. Perhaps the trippiest design I have ever seen, I looked for a name-check for the artist but could not find one.

330ml can served in a shaker pint. Canned 04.06.18. B.B. 04.12.18 (seriously). Pours a translucent straw-gold with a slight haze and a tight, half-inch, bright white head. Nose expresses light, fruity esters and a hint of biscuit malt. Taste consistent with nose; however, more malt forward in the flavor profile than the nose. Mouthfeel is light in body with an assertive, somewhat gassy carbonation. Overall, a sold APA; however, not as flavorful as the last time I had it.

A: The body is relatively hazy with a mid yellow and light orange hues. The head is white, 3mm thick having average retention. No lacing.
S: The aroma is very citrusy and resinous, having hints of grapefruit, orange, tangerine and even lime. The resinous profile is a bit deeper but less upfront.
T: The taste starts off with a very bittering orange peel followed by a somewhat harsh resinous profile. Drank fresh from a tap this can have a tremendously good profile but on can for a couple months - as it is now, it's far from perfect.
M: The body is medium to low. Carbonation is low. Alcohol is unnoticeable. Bitterness is medium but the resinous profile is way to high.
O: Way too resinous for me. Apart from that, averagely good beer.

From a 330ml can, unfiltered, unpasteurised.
L: Murky, burnt orange with a thick but short-lived head and lots of lacing.
S: Fruit & spice but not enough of it.
T: Ripe tropical fruit, marmalade and some spicy bitterness.
F: Medium body, almost rich mouthfeel, a little gassy.
O: Decent American-style pale ale brewed in N London by Robert Plant’s son. Worth a try.

Fantastic hop-forward APA. Great colour and depth in the glass with a strong passion fruit, citrus & wet cut grass aroma. It has a big citrus hoppy taste with the passion fruit giving way to grapefruit & lemon with a long bitter finish balanced just so with cracker malts. A simply gorgeous session ale.

Can pour into schooner glass.

Drank out of a can in Manchester England. Solid APA. Some fruit, some pine. Easy drinking APA. If you see it, grab it. Worth a try on a hit day or at a bbq

After visiting the UK at Christmas and being very impressed with canned beers from craft breweries such as Beavertown, Wild Beer Co., Magic Rock Brewing and Fourpure, I was looking forward to reviewing some modern craft beers from cans (and this one in particular). Now that I have reviewed a few, I have found is that, firstly, the beers themselves tend to vary wildly in quality (true of the craft scene in general) and secondly, being stored in a can does ensure that beers are kept free from light strike and oxidisation, especially important in these hop forward new age craft beers.

Appearance: Looks very nice. Perfectly clear, golden. Solid three finger, brilliant white head. Not as heavily carbonated as I thought. Probably 10 bubbles at a time moving slowly up middle of glass. Lots of lacing. Second half of can, when poured turned it very cloudy with swirls - still looks fantastic.

Aroma: As you'd expect from the hop bill (columbus, bravo, amarillo, citra, calypso, mosaic), loads of punchy fruits including pineapple, mango, orange and lemon. Also a slightly kind of funky smell at the back holding it all up.

Taste: Huge hit from the hops, sweet then a long bitter after taste. Not much else here at all, it's simple yet effective.

Mouthfeel: Resiny and surprisingly still in the mouth. Medium body.

Overall: I'm not a hop head and I have, or at least thought I had, grown tired of the pale malt, clean yeast and a ton of new world citrusy hops combination, which is exactly what this is, but I have to say I thoroughly enjoyed it and could imagine this as being a perfect session beer on a hot summers afternoon with a BBQ. As for the can itself, it’s possibly the best looking container for an alcoholic beverage that I’ve ever seen, with its rock/surf style artwork. 8.9 /10

Pretty good beer from Beavertown, I guess their flagship? Or at least most popular.

A well made beer if a touch too thin for me

First had in London, poured from 330-ml. (11.2-oz.) can, purchased with several other selections to take away from pub, into hotel water glass. Great can (current, not the one pictured above: http://www.beavertownbrewery.co.uk/beer/gamma-ray/).

L: Pours a beautiful golden colour. Large head so be very careful when pouring!! Head is nice and fluffy at first then reduces to a thin layer as I consume it. Carbonation appears low. Lacing is medium. 4.5

S: Wow this smells beautiful. This is how an APA should smell. Lots of citrus tropical and pine aroma. 5

T: Taste is sadly a bit of a let down compared to the aroma of the dry hops. But still holds up as being very enjoyable and is nice and bitter. 1/2 way through and I am already wishing I bought more then just the single can. 4

F: This feels a bit lighter than I thought it would. Carbonation is really there and keeps to the last sip! 3

O: Overall this is a brilliant APA. Aroma and bitterness being the key advantage, you will want another every time. 4.5

This was probably the best beer I had during my most recent 10 days in the UK. It tasted of juicy hop, especially on tap. I also purchased a can and it was pretty good too, though not as biting as the tap version.

Appearance -
Pours a thick, fluffy, 2 finger head, which dissipates to a thin film. Leaves a moderate amount of lacing. Bronze in colour and appears cloudy with some particulate. Moderate effervescence.

Overall -
The taste didn't quite live up to the amazing aromas displayed here. Overall drinkable and refreshing, but not the most balanced flavour on offer and on the bitter side. Refreshing, but left me wanting more of the flavours present in the smell.

Overall a very good APA; one of the better ones I had in the UK.

Pours a bit on the cloudy side, medium head, medium-to-low retention. Nose is certainly C-hops...better fresh aroma than expected. Flavor is pine and resin much more than it is fruity. Solid...maybe a bit too much...bitterness, but reasonably balanced. Overall, a solid effort that I would gladly throw back more often if not for the price tag (2.40 GBP for a 330ml can).

Poured from a growler purchased at Appalachian Vintner Asheville.

A- Pours a medium amber color with a 1/4 inch off-white head that retains decently before becoming a thin ring around the edge of the glass and some faint wisps of surface foam. Semi-resilient lacing leaves small clots behind.

S- Nice dry hop aroma that, at start, is citrusy but, as more sniffs are taken, there's an earthy, musty quality about it that eventually dominates.

T- More of that earthy, grassy hop flavor with a decent malt backing. Mild bitterness. Very easy to drink but a bit limp in overall flavor.

M- A tad oily with medium carbonation and a body leaning toward the lighter side.

O- A decent take on an American Pale although, without surprise, the hops weren't fully utilized in the way I would have hoped for it to be truly impactful.

I've had this in the bottle before but this is the first time I've tried it on draft. Pours a amber colour with a thick creamy white head. Aromas has lot of fruits, citrus notes & hops. Tastes of grapefruit, some resins, caramel notes and hints of fruits. Aftertaste has medium carbonation with grainy notes of fresh fruity hop and clean malt coming through. A American Pale Ale I very much enjoyed.

12oz can. Poured out a clear, golden orange color with a small, tan head of foam. It smelled of orange, pine and toasted caramel. Sweet caramel and citrus fruit taste with a piney bitterness.

Had this at Craft 260 in Fairfield on Friday 8/28, poured into a pint. They tapped it about a minute before I ordered it, so I guess it was fresh. Decent aroma to this, fairly hoppy. Was not expected this due to it coming from the UK. Flavor wise it has a kick of sweet malts but very, very hoppy. A touch of pine and citrus, but overall quite juicy. Light in the body and easy to drink, glad I went out on a limb and tried it.