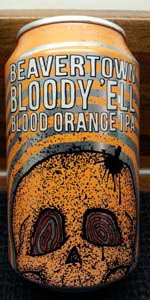 330ml can. 5.5% ABV.
Hazy gold, moderately juicy, moderately leafy, tangerine flavoured, moderately bitter, AIPA from Tottenham Hale, London. A bit one-dimensional, as are many of these overtly orange citrus IPAs, but mouthfeel is nicely oily despite being very dry.

Pours a clear, light gold, straw coloration with a medium, fizzy head. Smells of cat piss. with a hint of blood orange. Taste is quite hoppy, with hints of biscuity, caramel malt. As you might expect, this is dominated by citrus notes of grapefruit, blood orange and tangerine, with a very subtle dankness in the background as well. Finishes with a dry, medium/strong bitterness and light citrus acidity. Smooth mouthfeel with a light/medium body and carbonation.

Surprisingly light body for the ABV, awful nose, but decent flavour profile. Still, after the last two IPAs I had by them, I'm starting to wonder if Beavertown shouldn't stick to Stouts and Porters, even though their Black IPA is excellent.

Enjoyed poured from the tap at Lyon Bière Festival #3. Quite clean clear body. A bit weird on the smell it definitely has an orange bite on the taste.

Aroma: Mandarin and orange rind with hints of pine and grapefruit.

Taste: Sweetish and zesty orange and mandarin with a hint of honeydew and pine. Finish is lightly lasting bitterness.

Overall: Nicely refreshing for a hot summer day and surprised that it’s 7.2% ABV as it definitely doesn’t feel that high. For me, I would have preferred slightly more carbonation and a stronger bitterness though.

Slightly hazy yellow pour with a finger's width white head. Tangerine, pine and a bit of grapefruit on the nose. Tangerines and orange peel up-front on tongue...zesty. Slight bitterness and a hint of pine. Fairly bitter aftertaste with additional hints of Orange. Decent mouth-feel. Low carbonation and pretty smooth. Very, very deceptive for the strength. Goes down very easily.

Tangerine & freshly roasted coffee bean flavors up front; a faintly dry finish. A unique combination of flavors that turned out quite tasty.

Third of a litre, on draught at the Craft Beer Kontor.

A: Golden, hazy, decent sized rocky head, left quite a bit of lacing around the side of the glass.

S: Orangey, almost like orange Fanta, which became more pronunced as it warmed.

T: First thought was "this is supposed to be 7.2% abv" The booze was barely detectable, strong hints of orange which gave way to wheat and grapefruit.

O: Very dangerously drinkable, very subtle for the style, could get a person in a lot of trouble as it's much stronger than it seems.

10 oz pour at brewery. Pours pale gold (I guess the name made me think there would be a red hue) with a smallish head (soft pour) that leaves some film. Nose brings definite orange rind along with complimentary hops. Taste doesn't carry over the nose except for a strong citrus hop element. I felt a bit more malt backbone might have helped round this one out. Quite a bitter finish. Overall, a very decent but straightforward and forgettable IPA.

330ml can served in a can glass. BB 05/10/16 indicated on the base of the can. Pours a golden yellow with a loose, half inch, bright white head that eventually settles into a bullseye dollop and a frothy band around the shoulders. Swaths of lacing are revealed during the tasting. Clarity is slightly hazy. Nose expresses blood orange, pith and a hint of yeast. Taste is a bit more subdued - citrus is present, but not as bright and there''s an earthy/herbal quality present in the flavor profile. Mouthfeel is light in body with a crisp carbonation and a light acidity. All and all, decent but there are better examples of the style available.

Hazy gold colour, zesty orange and strong citrus hop nose. Fruity light and refreshing but robustly hopped through to the finish and unexpectedly not bitter for an IPA. Clean and easy to drink.