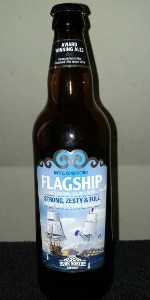 Notes:
View: Beers
Reviews: 11 | Ratings: 26 | Log in to view all ratings and sort
Reviews by Spike:

500 ml bottle, will soon be available at Cardinal Pub & Bar, Stavanger. ABV is 5.3%. Deep golden to amber colour, low white head, leaves a nice lacing. The aroma has notes of toffee, malts and some fruit. The flavour is more malty than hoppy, with toffee and blackcurrant notes, but not very sweet. Moderate hops in the finish. This is hardly an IPA by any stretch of the mind, but a fairly decent premium bitter. Very drinkable.

Bottle conditioned. Amber. Lots of effervescence. Continually built head.
Zesty hops with a light malt and fruit aroma.
Taste continues the aroma. Citrus fruit moving to a caramel and then dry finish.
Smooth due to the conditioning.

Light amber to orange in colour with an off-white head.

The nose is citrus hops and yeast: next to no maltiness found in the smells.

The taste has a hoppy start which turns into a sweeter maltier centre followed by a dry bittering finish.

Enjoyed it just as much as the cask one I've reviewed.

On tap at Against the Grain, Dublin.

Flagged as 6.3% on draft, which confuses me.

Punches way above it's weight; almost like a DIPA. Some very American characteristics to the aroma, and serious bitterness. (Admiral is the most prominently named hops, but there is EKG and Fuggles in there, too.) Curious if it hold up in the bottle.

Welcome addition to the new generation of "traditional" English IPAs.

A 500ml bottle with a BB of Aug 2018. Acquired recently from Waitrose. The label mentions that this was originally brewed to celebrate the 200th anniversary of the Battle of Trafalgar. Described as an IPA hopped with Admiral.

A: Poured into a tulip pint glass. Bottle conditioned. A deep, hazy marmalade-amber hue with moderate carbonation and fine suspended sediment. Produces a large head of creamy white foam that lasts for a few minutes before reducing to a patchy surface layer. Slight lacing.

O: Eschews the modern penchant for insanely aromatic hops and instead opts for subtlety and tradition. Looks good, while the aroma and flavour showcase leafy hops, mild fruitiness, hay, ale yeast and caramel malt. Nice body. Balanced and drinkable - hopheads may complain about the lack of intensity but this is well-crafted. Would be perfect in a Cotswold pub. Worth sampling if you have the chance.

Best beer from hook Norton I have had so far, bought from brewery shop. What you would expect from a traditional English brewery when it offers up a mid 5 percent bottle conditioned copper ale.


S: Earthy, a sort of smelly foot like a woman’s not a man’s, glue.


O: Got at Villa Market in Bangkok, drank in Hat Yai, March 2nd, 2015. Great label on the bottle. Sort of clunky, but a good brew.

Tescos 500ml bottle, blue label with ship on.
It's a golden seethrough light coloured beer with 2cm yellowy white head.
The smell is a little sweet for an ipa but some grapefruit in there
Taste is great not as powerful as the kind of IPA I would normally like such as a strong brewdog for example
Mouthfeel is good because after the smooth comes a really bitter fizz that is great on the tongue.
Overall I gave the beer a 3.5 because I've had better IPAs but enjoyed this rather light one more than most.