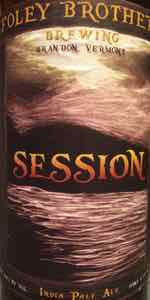 Lovely light straw with a thick foamy head that dissipates very slowly. Pine, grass and slight dankness on the nose. Lighter pine on the tongue with grapefruit and grass dominating. Crisp with strong carbonation. A real thirst quencher that I would be very happy to have again.

One of my favorite sessions EVER!

Outstanding session IPA. Bottled in late July so I was expecting a muted nose but that was not the case - aroma of pine, mango, orange and wood. Nice, nearly juicy, taste of tropical fruits followed by biscuity malt with a (very) heavy bitter finish that belies the ABV. How they managed to do all this under 5% ABV is impressive and speaks volumes about their IPAs. Will gladly seek it out and enjoy it again.

Poured from the 22 oz. bomber into a Sierra Nevada IPA glass

a: Clear gold with a two inch thick white head which receded to pillowy surface foam and patchy lacing.

t: Grapefruit rind with fairly sttrong bitterness which lingers over a light biscuit malt base. Grassy notes develop later and eventually take over the taste.

o: More like a hoppy Pilsener than IPA. Impressively hoppy and visually exceptional for a session brew, but at first the dominant bitterness is a little too harsh. Once the vegetal notes kick in it becomes more enjoyable.

Clean, crisp, and enjoyable at 4.8ABV. Pours a very light yellow color with a moderate 2 finger head. Smell is pine, clean, peach, pineapple. Taste is also clean and light and hoppy. Very enjoyable. Feel is super smooth and easy to drink. Overall this is an outstanding beer.

Pours a golden color. The nose is big on pine, and some sweet malts. Taste follows the nose, more pine that citrus. A nice bit of carbonation and a light feel/taste. Overall a nice session.

One of the better sessions I've had

Pours golden yellow with a moderate lingering head from the bottle. Moderately hoppy smell which translates to a delightfully lightly hoppy taste with a nice soft mouthfeel. Extremely sessionable.

Pours a nice deep golden yellow. Not cloudy but more on the hazy side. Not much head.

Smells of grass, pine, and bitter grapefruit and lemon.

Taste is similar to the nose. Nice bitter lemon and pine. A touch of malty sweetness.

Mouthfeel is nice and soft. This would be a great beer for 16 ounce cans. Totally crushable.

Session from Foley Brothers Brewing
Beer rating: 90 out of 100 with 77 ratings