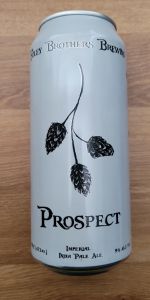 Pours a hazy golden color with a long lived tall head and a lot of lacing.

Tastes of lightly tart grapefruit, orange and a bit of lemon with a barely bitter, slightly alcohol warm finish.

This is a sneakily strong, very drinkable brew. Predominantly juicy but not overly so and well balanced with its tart and bitter elements. Well done!

can into glass
Substantial, and sustaining white head. Cloudy, medium and bright orange, with a bit of yellow highlights. Smells like malted fresh squeezed orange juice. Refreshing, orange peel and juice flavor, without a big bite in the citrus peel department. The finish continues with an orange peel motif, and there is a bit of pine and whiff of a floral tinge there as well. Really good citrus fest of beer.

16oz can purchased from the fridge as a single for $5.00. No canned on date. Based on when I purchased it and that it's been in my fridge for a while, It's probably at least 2 months old.

Look: Pours a very pale color - somewhere between straw and light gold. A very fluffy off-white head has slowly reduced to a thin pillow-top, leaving behind some nice lacing. This is almost clear with some tiny particulate floating around and a bit of a chill haze. The bottom of the can revealed a much more hazy appearance.

Taste: This is really tasty. I often don't enjoy imperial IPAs so much because they taste imbalanced to me or they tend to wear on the pallate. However, this one - for a 9% ABV imperial IPA - is very drinkable and balanced. It reminds me a bit of Lagunitas Super Cluster but with a bit more sweetness and less aggressiveness. Up front, it's has an intially sharp piney hoppiness, but it quickly mellows to showcase a very nice crackery malt backbone with mildly sweet and juicy flavors that sit nicely on the pallate and wash away to yield to the finish. There's this nice kind of white grape flavor that I get here that is really pleasant and enjoyable (although there is no mention of Nelson Sauvin hops here). Finishes dry, somewhat crisp, with a significant yet not overbearing bitterness along with the slightest bit of acidity and tanginess that just ties it all together.

Feel: Very nice mouthfeel. It's soft yet it has a slight chewiness and lightness on the palate, with nicely effervescnet carbonation.

Overall: I think that this is the most drinkable 9% imperial IPA that I have ever had. Granted, I haven't had so many other 9% ABV IIPAs; however, I have had quite a few IPAs and IIPAs that were lower in ABV that were considerably less drinkable. Kudos to Foley Brothers for putting together such a delicious offering!

Foley Bros are masters of their craft! Just buy this and drink it up.

Pours hazy yellow with two inches of dense white foam. Retention is superior with an abundance of lacing.
White grape, peach, pineapple, and grapefruit in the nose. Medium bodied with a creamy, soft mouthfeel. Hard peaches, grapefruit, and candied grapefruit on the palate. Finishes plenty juicy with a firm, drying bitterness and lingering citrus.

Poured into s snifter, it's a cloudy, bight golden beverage. Head is white, fluffy and rocky, and lasts well, with solid lacing. Smell is dry and crackery, with lots of rindy citrus, especially grapefruit. Body is a solid medium-plus, and it feels quite nice on the tongue.

Flavor has a touch of sweetness with more crackery malt. Has a healthy amount of pithy, resiny citrus. Grapefruit and pineapple levels are plentiful, along with a bit of lemon-peel and subtly sweet tangerine. Has only low to moderate bitterness, and the 9% ABV is not overly noticeable. Quite tasty! Prosit!