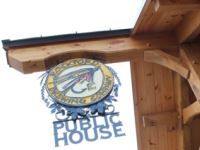 The RBC is located near the downtown area of Rockford and the Rockford Dam which is across the street. The dam is a pretty area, and if you visit, it'd be a nice place to sit after drinking a bit. The brewpub itself is almost "log-cabin" in feel. Small main seating area with a bar up front and long tables. There is an area upstairs as well, but I didn't visit that area. Windows to the left of the bar to see into the brewing area.

There were 7 beers on tap when I visited. I'd say they went from average to good. Since I hadn't visited I tried a flight. Flights are four 3-oz pours. I tried the Hoplust IPA, Carriage House Ale (listed on BA as an APA, but definitely did not taste like that although I am not sure what I would call it), Rogue River Brown, and Ain't Jemima (an experimental maple sap beer that was my favorite by far). I also tried a sample of the Mocha Porter which was underwhelming to me, but I'll admit, porters aren't usually my thing. The other 2 beers I didn't try were Blue Collar Porter and an Irish dry stout. 3-oz pours were anywhere from $1.50-$2.00.

Service was good, although I visited when it was slow so there wasn't much else for the bartender to do. But no complaints here.

Food (mainly sandwiches) are available, but I did not try them. Somebody near me at the bar had a corned beef sandwich that didn't look bad.

My flight of four +1 more sample was about $9, which seemed a bit pricey for the quality of the beers. Grabbed a pint glass too because I really like the fly fishing logo, but it was $7 which is probably the most expensive pint glass of the breweries I've visited.

Overall, I was happy enough to visit again if I was in the area. GR is stacked though, and being a bit away from the main group of breweries you almost have to intentionally head here. Worth a trip to see for yourself.

A nice little local spot. Right on the bike trail makes it a great location to end a ride. Been a couple of times; the selection is not large and the beer a little above average. Still, not a bad place to stop for a beer and some of there more recent beers seem to be getting better.

Comfortable, low key place, great beers, right on the White Pine Trail. You can ride your bicycle there. What's better that that?

This place was lacking in selection and quality. I will not be back.

An excellent little pub, with a cool atmosphere. They do have live music some evenings, though the night I visited, the entertainment was the company of friends. The downstairs tap room is cozy, and the bar and table setup is comfortable. The beer selection is good for a small microbrewery, and the quality of the beers is excellent. Service was friendly, the people I was with were regulars and the server treated our entire party like family. I'll make sure to visit whenever I come back to W. Michigan.

Fantastic setup both upstairs and down. Great cabin lodge feel with nice, albeit small, patio area outside. Service is top notch and the beers range from good (Carriage House, Sheehan's Irish Stout) to stellar (Rogue River Brown on nitro, Country Ale, Belgian Multigrain, Sugaree Cyser). One of my favorite places in the area.

My wife and I visited on a weekday afternoon to sample the beers and to have a snack. The brewery is located in a new building that is part of a small complex of retail businesses just at the west edge of the downtown area. The interior is heavily of wood trim and there are long wooden tables, and all of this has a nice vibe effect. We didn't look at the area upstairs. The brewing equipment is visible thru a large window, and that adds to the ambiance.

We ordered a sampler of the 9 available beers (two were cider/cyser) in 4 oz pours (the Red Ale was not available). The basic menu beers were spot-on to their respective styles, and the specialty beer (Erdbier = Wheat beer with strawberries) and the ciders were very tasty although we usually don't seek out these types of beverages and don't feel qualified to judge them. The IPA was my favorite, and my wife liked the Scotch Ale the best.

The menu price for a full pour of the beers may be a tad higher than most places, and several of the beers/ciders have a smaller pour at a higher price.

We had a cheese spread and cracker appetizer for a snack, and it was good. The rest of the menu looked like the offerings were hot and cold deli sandwiches, and their descriptions made them sound enticing. The prices listed on the menu seemed reasonable. If we're ever in this area again, we'll go back.

Rockford Brewing Company in Rockford, MI
Brewery rating: 3.73 out of 5 with 234 ratings