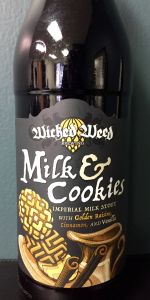 Appearance:
Blackened, firewood brown with an ember red aura. A half finger of pale, beige head swells up, then fizzes away quietly.

Bouquet:
The distinct, cozy aroma of pull-apart, raisin rum cake with a conservative dash of allspice and cinnamon baked in.

Taste:
Juicy, golden raisins with a lacy shawl of cinnamon draped over it. Sugar cookie and a smidgen of baked oats envelop a vibrant heart of warm vanilla. Superb!

This smells very much like chocolate and oreo cookies with lots of whipped cream. There is also faint mint, and cinnamon comes out as it warms. Vanilla comes out later, while roasted malt provides a common backdrop. Extended warmth transforms the aroma to raisin cookies.

The beer is more bitter than expected for a Pastry Stout. Still the roasted bitterness is appropriate for the Imperial Stout style, which is what is stated on the label and how I am judging this beer. Cinnamon, vanilla, and chocolate are all strong in a lingering finish.

This is a full-bodied beer with a texture similar to a soft jersey cotton. Alcohol is well below expectation. Fine, soft carbonation coats the tongue.

Without mistake, this is a dessert beer, and it is rather comforting. It has enough interesting aspects to elevate it beyond a simple novelty.

12 oz bottle poured into a tulip

O- A nice sweet stout, easy to drink with a nice balance of flavors.

Poured from a can into a snifter glass somewhat hard, eventually resulting in a finger of dark tan head that slowly faded to a ring of lacing. Dark brown coffee color, pretty much opaque. Smell is sweet malt, not amazing but a good smell. Excellent taste of slightly sweet malt with cinnamon and maybe a hint of raisin at the end, but only because I knew to look for it. Borderline dessert stout, but not quite. Light/medium bodied with light carbonation. Another excellent stout from Wicked Weed.

L: Very small light brown head with no retention and leaves the thinnest of rings. Beer is very dark brown or black.

T: Pretty good job on the taste as well. Not only the taste but a certain oatmeal texture, as well as the sweet raisins and some cinnamon and vanilla. Not very sweet, really, finish is pretty neutral. Alcohol not evident.

Appearance - Pours black with cola brown edging. Tan, finger width head that displays great retention before dying down to a thin, consistent layer of suds across the surface, building up into a thick ring around the edge of thew glass. Lacing is good with some broken sheeting, lines and small spotting.

Smell - The smell is spot on raisin, oatmeal and cream. Like a Little Debbie's oatmeal cream pie plus raisins.

Taste - Raisiny sweetness hits the taste buds first, followed shortly by the cinnamon. Light, creamy vanilla and a bit of oatmeal follow. Very subtle chocolate base. Sweetness in the finish and lingers in the aftertaste. No balancing bitterness to be found.

Overall - They did a good job of nailing that oatmeal raisin cookie taste, but I wish they would have added a bit of bitterness in the form of roast or dark chocolate to balance this out, but it is definitely on the sweet side. The rich raisin notes become a bit cloying. Otherwise, nice dessert beer that would be a great treat to crack around the Holiday season.

Poured a black body with minimal tan head and lace ring around glass. The aroma has some lactic qualities to it but mostly I get sugar cookie type aroma. The beer is bready, not too sweet, has a nice and mild body with a somewhat muddled finish although overall the beer is balanced and enjoyable.

Deepest of browns with decent tan head. Sweet aromas abound with vanilla and dark fruits. Taste is sweet, almost too much, but OK. Dark fruits and vanilla dominate with malts and cinnamon dry spice following up. Mouth feel is sweet and coating and finish is the same. Overall, even though a sweet beer, it is balanced quite well

L: Poured from a bottle to a pint glass. Had a dark brown / black color and a thick, opaque consistency. There was a half inch of creamy, tan-colored, somewhat long-lasting head. Sparse lacing.

T: Tasted of a tinge of malt (up front, for the most part), lots of vanilla, some chocolate notes (always welcome), a good shot of cream, and lots of cinnamon. Not much raisin, though. Unlike some beers, this one really does taste as advertised. They loaded it up with cinnamon, vanilla, and everything that makes it taste like a cookie. Delicious.

F: A good amount of carbonation with a smooth, creamy finish. Medium-bodied.

Nice looking beer. Pitch black with 1 finger head. Aroma is kinda roasty. Taste is sweet and chocolatey. Really nice and 180 degrees opposite the aroma. A light balance of hop bitter finish but very mild. A really nicely done stout. Enjoyed this one.

The smell is rich and chocolatey. I'm also picking up some alcohol and berry sweetness.

Initially, this beer tastes like a rich, milk stout. The flavor in the swallow and aftertaste is very complex. I get a graham cracker taste, light pepper, cream, and vanilla. I don't get any raisin but that's a-ok by me.

Seams Wicked Weed has the same base for several beers and changes their profile by minor notes. Milk and cookies, French toast, and Xibalba are all and the same to my palate with minor changes. Bottle date 11-7-17. Raisin is present but a flat after taste. Not getting any vanilla at all. A touch of cinnamon but just not living up to the beer I would expect. It's good in a pinch but better options available. Worth a try.

I'm having this shortly after enjoying French Toast Stout. The pour is a similarly dull, blackish-brown with an additional ruby hue on the edges and a slightly more formidable yet still moderate tan, frothy blanket.

This doesn't smell drastically different from French Toast, but there is a little more cinnamon, as well as a raisin sweetness. I also get that chocolate malt, and little to none of that astringent pine, or whatever it was that negatively influenced French Toast. There is actually, pleasantly, an element of crispy, toasted, brown-sugared oatmeal cookie. Wow.

Taste is smoother and slightly more decadent than French Toast, with raisin, cinnamon, and chocolate chip oatmeal cookie--this is hitting all the right notes without being overly forward or cloying with flavorings.

Milk & Cookies is still in beer territory, but for me it's more like a brown and less like a stout. Again, similar to French Toast, being lighter in body and feel than a good stout, with a thin, frothy fizz and a semi-dry finish.

It smells like cinnamon raisin cookie. There is a little bit of sweetness there, but mostly spices.

It tastes like it's described and smells. A nice balance between the slightly sour raisin and the vanilla milk sugar sweetness. It is more doughy and bread like than cookie, so a little heftier. The cinnamon is a nice compliment and never takes away from the rest of the flavors. There is no coffee at all to me.

Small pour into a plastic cup

A: Body was a black brown with a little khaki head.

O: This was exactly as described a very nice beer easy drinking sweet with lots of raisin and cinnamon.

The beer pours a nice looking brown head that dissipates quickly but leaves a thing film of bubbly . . . bubbles. The beer itself is a nice chocolate black. Anyway, the appearance isn't the sell of the beer but it looks good nonetheless.

The smell is pretty good. IT has a strong ginger snap smell, which consists of ginger, cinnamon, light sugar, and a bit of bread. The smell also has a lactose smell that is supposed to be the milk that complements the cookie portion. Despite, the cookie portion being slightly stronger, it works. There does not seem to be a chocolate note.

The taste is a bit better than the smell. It still has the gingerbread cookie note that contrasts with the milk note from the lactose, but there is also a traditional sweet dark chocolate note that enhances the taste. It adds a good unifying taste. The ginger and cinnamon are still pretty strong though.

The fell is pretty good. It a heavy bodied beer but with a thin and slick feel. It has very little carbonation.

Overall, a pretty good and interesting beer. It's definitely one of the more unique dark beers that WW offers and definitely worth picking up if you see it but nothing to spend countless hours searching for.

Aroma: I get a bit of a burnt coffee aroma and just a touch of a woody bark-like scent. Not picking up any cinnamon, raisins, or vanilla.

Taste: It tastes just like an oatmeal raisin cookie. While I can't say that I taste the raisins, cinnamon, or vanilla listed on the label individually, as a whole this beer literally tastes just like an oatmeal raisin cookie. It's just like a cookie in liquid form. There is this lightly toasted flavor that really complements the flavor giving it this lightly burnt cookie edge flavor as well. On the side of the label it reads "...baked cinnamon-raisin cookies..." and honestly they are dead on. This is one of the few beers that I have had that make a very specific claim and nail it.

Mouthfeel: It feels just a bit thin but otherwise the texture is nice and smooth. The body is also a bit light to support such wonderful flavors. It's incredibly drinkable at 8.5%.

Overall: The beer is outstanding and I really enjoy it. It's the kind of beer that sticks in the back of your mind because it's so good and makes you want more of it. I would definitely buy more of this beer and I highly recommend at least trying it. If you enjoy oatmeal raisin cookies then do yourself a favor and buy this beer because its fantastic. Delicious!

Bottled on 11/8/16.Pours into a goblet jet black with a thick creamy-like deep beige head that leaves broken rings of lace as it settles thru the duration of the session.Not real big and bold aromas but vanilla and roast come thru the most.Deep vanilla notes on the palate with the cinnamon not far behind,the roast is understated but the lactose finishes big.I'ts a vanilla and cinnamon bomb but I'am fine with that,enjoyed it.

A - Poured into a Kate the Great tulip a nice dark brown hue with a thin mocha head that fades to leave a light blanket.

O - Overall this was a solid stout, just wish the cookie aspect was more prominent.

Overall not bad, doesn't live up to what some of the other great breweries are doing there days.