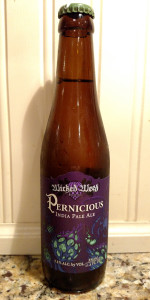 Notes: Pernicious implies influence that is harmful in a way not easily noticed. This beer is harmful, not because of overwhelming hop bitterness, but because its balanced brightness insidiously ruins your expectations for all other IPAs. This hop delivery vehicle is crafted to enjoy fresh and often and because of its drinkability and clean finish you’ll never look at IPAs the same again. The harm is done.
View: Beers | Place Reviews
Reviews: 264 | Ratings: 1,315 | Log in to view all ratings and sort
Reviews by chitoryu12:

Taste: Average bitterness, the nose’s fruitiness, with a dry and spicy finish.

Overall: A complex and satisfying experience.

Pernicious IPA from Wicked Weed Brewing
Beer rating: 94 out of 100 with 1315 ratings