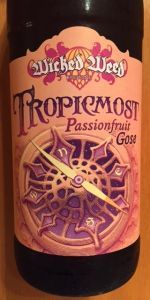 Notes: For us, this Old World-inspired beer is mile zero - the point at which we faithfully spin the needle on the compass and follow at will. From the warmer climates of equatorial lands, this Gose takes its tropic inspiration. Brewed with tart passion fruit and flavor-brightening sea salt, Tropicmost Gose is a roadmap of the Southern Americas. Cheer to moving until direction is found.
View: More Beers | Place Reviews
Recent ratings and reviews. | Log in to view more ratings + sorting options.
Rated: 3.64 by CreightonSM from New York

From the CAN: "For us, this Old World-inspired beer is mile zero - the point at which we trustfully spin the needle on the compass and follow at will. From the warmer climates of equatorial lands, this Gose takes its tropic inspiration. Brewed with tart passionfruit and flavor-brightening sea salt, Tropicmost Gose is a roadmap of the Southern Americas. Cheers to moving until direction is found."; "Keep it cold. Drink it fresh."

I may not be a huge fan of tarts & sours, but I have a special place for Goses! Y'see, I am a retired U.S. Navy sailor & it was during one of my first underway periods that I realized that I have an affinity for being at sea. I loved underway time & especially going out on the fantail after chow to take in the air. Nothing like salt spray to clear the sinuses & let you know that you are alive. Goses incorporate salt & the really desirous ones incorporate sea salt. Mmm.

Knowing that this beer was, at base, a wheat beer, I CANducted some in-CAN agitation before Crack!ing open the vent & CANducting an inverted Glug into the awaiting glass. It did not require any prompting on my part to form two fingers of fizzy, foamy, soapy, bone-white head with limited retention. Color was a deeply-hazy/lightly-cloudy Yellow-Gold (SRM = 4 - 5). Nose was clearly the sum of its parts with both the passionfruit and the salt readily evident. This was tart, not sour, as evidenced by the unbidden pursing of my lips. Mouthfeel was thin-to-medium, not watery, but not much beyond it, either. I could really taste both the passionfruit & the salt & I would have had NO problem identifying this as a Gose! Tart, tangy, salty & oh, so refreshing on a hot, humid Summer's day! Mmm. I would not want a steady diet of it, but it definitely made for a nice segue into my next beer. Finish was light & dry, highly refreshing. Very nice!

Reviewed by Victory_Sabre1973 from Minnesota

Overall: an enjoyable beer that is refreshing and crisp.

Reviewed by BeerDawgs from Georgia

L - Bright yellow, not much clarity, 1 finger of head and minimal lacing

O - An easy to drink gose, good for a summer day

Smell is salty grapefruit, with less passion fruit than you'd think, and a little lactic acid.

Tastes like a grapefruit and light passion fruit margarita with a salted rim. There is light lactic acid, and it's almost more lemon-lime than anything else. Nothing really screams flavor.

Tropicmost is nice, tart and refreshing with a medium, crisp body.