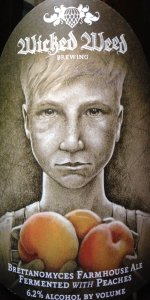 Notes: Brettanomyces Farmhouse Ale fermented with Peaches
Our craft honors our childhood lessons. We were lucky to learn ours the hard way: “stick with it,” “wipe your tears,” “Earn your calluses,” and “try to keep up with our ol’ man.” These are the lessons that stay, working their way into our weather flash and aching bones until they are as much a part of us as our own names.

Garçon de Ferme is a foeder-rested, Brettanomcyes farmhouse ale. After fermentation,this pleasantly tart ale is blended back onto over a pound and half per gallon of fresh, whole peaches to reflect and echo that the craft of the old has not been wasted on the young.

The taste is great very lively puckering taste yet aroma and gently sweet peach transitions to a lactic tart quality that is a balance of funk and fruit with a nice dry finish and no off puting wild yeast residual flavors to detract from the peachiness.

The smell is of peaches, and a brett.

It staunchly star sour with a bit of bitterness.

I got this in North Carolina I’m drinking it in Reading California August 13th, 2020.

Rated by Huhzubendah from District of Columbia

Rated by Rimbimhoot from Illinois

Reviewed by IvoryFoxhole from Virginia

L: Golden orange in color and hazy. 1.5F white head at first, but it goes away leaving no lacing or anything.

T: Enough peaches for the Presidents of the United States of America, sour mash, Brett. Just the right amount of sour.

Reviewed by LambicPentameter from Nebraska

4.31/5  rDev +2.9%
look: 4.5 | smell: 4 | taste: 4.5 | feel: 4.25 | overall: 4.25
As a huge fan of the way stone fruit and Brettanomyces play together, I've been interested in tracking this one down for awhile, but lacking the motivation to put any effort into it, since I live outside of Wicked Weed's distribution footprint. So I was pleasantly surprised to come across this on a recent trip and wasted no time in opening it up. Poured it out of a 500 ml brown bottle and into a basic tumbler glass, on account of traveling and not having any beer-specific glassware. Bottle says vintage 2017 on the label.

Appearance (4.5) - Pours a glowing tangerine color with almost no translucence--reminiscent of the way so many IPAs look these days. Moderate pour yields maybe a half finger of stark white foam resting atop the body, lingering for a minute or two before shrinking away to just a line of bubbles around the edges of the glass. The head has an effervescent, active look to it.

Smell (4.0) - My initial thought is that I'm going to be disappointed by this beer, because the ripe, fresh-cut peach aroma that I was hoping for just isn't there. Instead, I get a significant amount of musty, woody funk from the Brett and some sharper notes of acidity that suggest there is some Lacto and/or Pedio involved as well. That said, there is some fruity peach aroma when I work to detect it, but it's really struggling to overcome the wonderful sour bugs that are present. And either way, it smells enticing, even if different than what I was hoping for.

Taste (4.5) - Here, the additions of peach become a lot more obvious than they were on the aroma. That piercing acidity from the bacteria is still front and center, but the peach does a much better job of holding its own, with some of the bright sweetness balancing out the acidity. The Brett still provides an underlying funk to the beer, but this is definitely more perceptively sour than other peach + Brett beers that I've had the opportunity to sample in the past.

Mouthfeel (4.25) - The body is on the light side of medium, with some fullness being provided (assumedly) by the fruit addition. Moderately carbonated, but the sharpness is boosted by the considerable acidity.

Overall (4.25), a nicely done beer from WW. I have to admit that I came in expecting/hoping for something along the lines of the amazing Peche N' Brett. And while this beer was not that, it was delicious in its own rite and one that I would certainly purchase again if I were to come across it randomly in the future.

Jul 21, 2018
Rated: 4 by NotAlcoholicJustAHobby from Vermont

4.03/5  rDev -3.8%
look: 3.75 | smell: 3.75 | taste: 4.25 | feel: 4 | overall: 4
So I bought this because I likes other Wicked Weed beers and the creepy kids face holding peaches seemed like this could be an interesting beer. Bottled 07.12.17, it poured cloudy yellow gold color with a 1-2 finger foamy white head that was packed with tiny bubbles, dissipating very slowly and leaving minimal spotty lacing that slides down fairly quickly.

Smells of wheat, peaches, dry hay, cardboard, lemon zest, bread crumbs, mild funk and peppercorns. Not as much peach in the nose as I expected, and yet the creepy kid still stares at me, not blinking and holding 3 juicy peaches. Strange.

Thankfully the flavor had a lot more peaches in it as well as a citrus taste like Orangina soda. The sweetness is there, but there are tart and funky aspects which weave peppery spices like coriander with cracked wheat, dry yeast and baking flour. The brett, funk and oaky notes show up late and then give off a newspaper like taste and aroma before being wasted away by more peaches and lemonade. A very interesting flavor, it's confusing and I like it.

Feel was pretty even across the board which made this enjoyable. Not too tart, not overly sweet, but light enough and full of flavor that it was nice to sip and savor. Glad this ended well as the nose didn't blow me away. I'd have it again.

4.15/5  rDev -1%
look: 4 | smell: 4 | taste: 4.25 | feel: 4 | overall: 4.25
A: Pours a hazy, almost opaque pale to medium bright lemon yellow in color with moderate amounts of active visible carbonation rising quickly along the edges of the glass and moderate amounts of medium straw yellow and faint apricot colored highlights. The beer has a twi finger tall dense sudsy fizzy light beige head that reduces to a medium to large sized patch of very thin film (covering a little less than 50% of the surface of the beer) and a very thin ring at the edges of the glass. Minimal amounts of lacing are observed.

O: While this is a fruited "sour" this beer is quite aggressive in it's tartness/sourness and it is not as approachable as others in this category. I found it to be enjoyable with well hidden alcohol but not the easiest drinker.

Look - hazy straw, head disappeared before I could get a good look.

Aroma - lemon and Brett character, wet sock, some subtle vomit. Not much peach if any

Taste - again no real peach flavors, some lemon, the acidity hides the flavors. Definitely on the high side of sour acidic. Not harsh, but very close for me. No real complexity. Sour, lemon, subtle vomit.

Feel - again, right on the brink of harsh acidity. Carbonation is gone.

Overall - sours have a big range, and for me, this one is a bit past my ideal point. The acidity didn't add any complexity for me, it may have covered up some. The Brett flavors and aromas were leaning toward the unsavory end for me. Not awful, but more curious than truly enjoyable.
Id like to see what another year or two in the bottle would do to it.