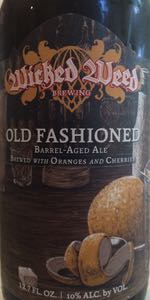 Notes: The bartender is always there for us, our reliable companion who deliberately crafts the perfect cocktail with every dash of bitters and teaspoon of simple syrup. It’s this spirit of precision and passion for the craft that has led to our Old Fashioned Ale. This cocktail-inspired beer is gently aged in fresh bourbon barrels with Montmorency and Black cherries, and finished with fresh orange zest, all painstakingly measured and mixed in the spirit of camaraderie. Muddle your cherries, but not your time.
View: Beers | Place Reviews
Reviews: 40 | Ratings: 181 | Log in to view all ratings and sort
Reviews by Buck89:

Poured into a tulip. Nice looking beer with a deep rich mahogany brown color and a modest tan head. The foam settled pretty quickly into a wispy cap with minimal lacing. With my eyes closed it definitely smelled like a classic cocktail: dark cherry, orange zest, subtle bourbon, and sweet caramel malt. I also picked up some cinnamon and spices. The taste was a bit different. Up front was a rush of rich toffee malt which I would expect from an Old Ale, reminding me of this drink's roots. The malty goodness was almost immediately met with a variety of balanced flavors, including orange, cherries, vanilla, and oak. At the very end, the bourbon made a noticeable entrance with a gentle warming and a slightly acidic exit on the swallow. Full-bodied and rich, but certainly not too sweet. A well-balanced brew for sure!

I absolutely cannot believe how spot on this beer is for the flavors they were trying to re-create. It is an absolute joy to drink something this complex and unique in a beer. Hands-down bourbon is the star of this beer. It is not overpowering however it is well-balanced and gorgeously illustrated. Flavors are bold and Rich with the Nice hands of dark cherry and orange peel. It is just sweet enough but still has proper alcohol burn that you would expect from the cocktail. This beer will likely age very well as I wish I would've bought a whole lot more of these. Point of note on this beer : if you do not like the cocktail for which this beer is named you should probably not bother trying it. Rating it poorly because you do not understand the wonderful nature of the simplistic but complex beverage would be a crime.

The beer poured a medium brown and thinner in body than anticipated. A tight, frothy, finger-tall, khaki colored crown topped the liquid but it quickly fell to a thick bubbly collar. A few drippy streaks of lacing trickled down the glass.

The aroma was bourbon, bourbon and more bourbon. Pleasant but very boozy and simplistic. Slightly sweet. Good amount of vanilla. Hint of brown sugar. The vanilla notes really intensified as the beer sat. A touch of cocoa came forth as well. By the drink's end, sweet cherry notes appeared.

The flavor profile was similar to the nose but more complex, and also much harsher. Super bourbony up front. Bit of citrus. Orange zest was noticeable. Hint of cherry as well. Moderately sweet. Somewhat spicy too. The beer finished quite hot. All in all, very similar to an actual Old Fashioned.

The mouthfeel was thin and fizzy, especially for a beer of this magnitude. The liquid contained a zippy, spritzy effervescence that seemed rather distracting.

While I am a fan of Old Fashioneds, I was hoping that this beer had a bit more nuance and subtlety to it. It almost mimicked the cocktail too closely. Three or four ounces definitely would have been enough, but a full bottle was quite overwhelming.

The beer pours a nice tan colored head that has a nice cream texture that adds to to its attractiveness. The beer itself is an opaque dark brown color that has a nice smooth texture to it. It's pretty good to look at.

The smell is fantastic. It has a nice moderate bourbon note and a little bit of booze as well. The dark cherry note and malt notes come out as well as the orange peel note in the finish.

The taste is absolutely wonderful. It tastes almost exactly like an old fashion. The taste has a nice moderate bourbon note with a hint of vanilla that makes sure it's present and probably the strongest of the notes but doesn't overwhelm all the other notes. The second strongest notes are the sweet and dark fruit malt notes with a nice cherry syrup note to make it seem like you're drinking an old fashion. The taste also has as very light but still noticeable orange peel finish at the end.

The feel is very good. It's a nice heavy bodied beer that is extremely smooth and silky with a slight thinness; similar to the actual Old Fashioned. There is some light carbonation to give that silky feeling and some texture as well.

Overall, a very good beer and one worth getting if you can find it.

L - Dark brown, with not much clarity or head or lacing

T - Caramel, brown sugar, semi-sweet, citrus, bourbon. My god, they knock this one out of the park.

F - Thin body and not much carbonation. But it was barrel aged so to be expected

**Note- there is an existing Old Fashioned by Wicked Weed in their archived beers which despite the matching label in the picture is a 5.75% red ale and definitely not what I drank. So I've taken the liberty of adding 2016 and creating this new listing.

Pours an opaque deep brown with roughly a finger of manilla hued froth. The head fades to a wispy surface haze and full crown that imparts scattered dots and dashes of lacing.

Wicked Weed's track record with me led me to assume that this would be good but Old Fashioned far surpassed my expectations. Lamenting my decision to only pick up one bottle.

Amber brown in color and translucent with minimal head and some lacing.

Nose is a bit boozy with orange and cherries. Some sweetness, some malt, and bourbon.

Taste is mild bourbon, booze, sweetness, mild orange and Cherry, malt, and booze on the backside.

Mouthful is medium and thinnish. Carbonation is medium high. Finish is sweet.

For a beer take on a liquor drink, this is pretty spot on. The booze is very much present but it blends nicely with the orange and cherries. The balance is nice and even better as it warms. Give it a try.

On tap at Sehkraft in Arlington, VA. Poured into a snifter.

Old Ales are one of my favorite styles, this beer has that oxidized taste but strays a bit too far from the style. A unique beer worthy of a taste but not a brew I would put near the top of my old ale list.