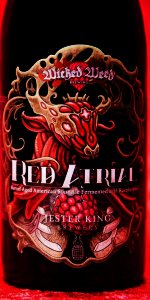 Color is darker than either Atrial Rubicite or Red Angel, with a burnt scarlet hue that's chill hazed but clears up as it warms. The head is very loud and active during the pour, displaying as a mixed pinkish-brown but dying swiftly thereafter to a wine-like surface.

Smell really does skirt the line between the raspberry sours of Jester King and Wicked Weed. It does not quite have the woody funk of Atrial Rubicite, but also steps back from the bright, zippy yet gummy notes of Red Angel. It's quite enticing, seedy, and still brightly extravagent, with a toasted sesame accent. There's just so much fresh raspberry for a 2 year or older beer, it's astounding.

The effervescence is so expressive that the first sip shoots loads of sour raspberry aromatics straight up your nasal passages to an intensely explosive degree. This puppy is so laden with raspberry you'd think nothing else would shine, but the carbonation really pops and turns this into the most red berry-filled, sour champagne-like experience you could imagine. The tightly compacted and active bubbly absolutely amps this up by bouncing this beer to all of the hidden parts of your palate, making it far more sour than it first seems, yet it's somehow not burningly acidic. It still exhibits quite a bit of malic acidity, and the red fruit is massive, but it's paired with some charred oak, toasted sesame and a bit of red wine barrel.

The body is light at first but fills out with the champagne-like carbonation that never quits, finishing semi-dry with a little sting.

Is it better than either the great Red Angel or indomitable Atrial Rubicite...? I actually don't think so. Red Atrial is extreme. It's extremely extreme. I was really excited to break this whale out of the cellar. In fact, we only opened this because of some trying times that have us unlikely to open anything else in the next couple months. But I'm not going to pretend that simply doing things to the absolute extreme is always going to result in a better experience.

Raspberries. All of the raspberries. Raspberry seeds. Sour and tart. Mouth puckering.

I don't know if I've had a beer with more raspberries than this. It's good but a bit one dimensional.

Beautiful crisp red color with a good amount of head that f area quickly. Nose is a strong raspberry punch, more so than regular atrial. Taste is strong American wild with a ton is raspberry. Feel is thick and a little syrupy. Overall, awesome beer about a half step above regular atrial.

2 oz pour at a share but this beer was phenomenal. I've had both base beers and the blend blew me away. Tasted like liquid raspberries with a slight sourness that was perfect for me.

Had on tap at Red Atrial release.

Smell: Comes off like any other Wicked Weed sour. Clean fruit, not a lot of funk.

Taste: Raspberry jam, simple as that. Feels only about as sour as a plain raspberry purée would be. Not enough funk for my tastes. Looks like the WW side beat out any contribution JK had on flavor for now. Interested to see the bottles develop. Need to do a side-by-side with Red Angel because I'm thinking they'll be very, very, very similar.

Feel: Nice and thick with fruit, might be able to spread this on some toast.

Overall: Really tasty, but no more unique than any other WW sour. Wishing it had more character that JK usually brings to their sours. I'll be sitting on a bottle for at least a year with hopes it develops some funk

Served on tap at the bottle release at the Funkatorium -- for some reason, the first pours from each keg were turbid. Bad, you think? Oh, no. More like puckering raspberry puree. As the keg progressed, the pours cleared up, revealing a less fruity, more tart beverage. I loved both, and when combined, a near perfect raspberry sour was in the glass.

EDIT (10Dec): Did a SBS with Red Atrial, Atrial Rubicite Blend 6 and 2016 Red Angel. Rated them in that order, though all were highly satisfying.

L: Bright ruby red and cranberry hues with a velvety thin white head
S: Raspberries, cherries, and a mild funk
T: Sweet and juicy ripe raspberries up front that meld into a mild tartness and a beautiful depth of funk that channels the signature funk of Atrial Rubicite
F: Medium bodied mouthfeel and a light carbonation
O: Absolutely gorgeous blend of Red Angel and Atrial Rubicite. The fruitiness, sweetness, tartness, and, of course, funk hit all the right notes for me. Definitely worth seeking out.

Appearance: Arrives at the bar the color of raspberry sorbet, with a thin head that fades to a ringlet; a few dots hang around

Taste: The sweet and tart raspberry tones wallop the tastebuds with some funk building, through the middle; after the swallow, all three elements combine elegantly

Overall: Red Atrial is a masterful partnership between the beguiling fruit tones of the Wicked Weed sour program and Jester Kings mastery of funky fruited sours; extremely enjoyable after a long wait in the freezing cold