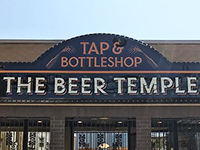 Reviewed by CopperMtnPlowboy from Ohio

4.97/5  rDev +4.2%
vibe: 4.75 | quality: 5 | service: 5 | selection: 5
Found this place per recommendation of the good folks here at BA. Visited Chicago on our family's annual winter random-team minor league hockey weekend, and looking to add to my "drank it myself" craft beer can collection. Fortunately TBT was open the Monday before Christmas because 1) Chris was open on a Monday when he normally is not 2) he recommended Spiteful Fat Badger - an outstanding beer - and 3) got me a new can I didn't know existed - Half Acre Heyoka IPA - which showed up for the first time right off the delivery truck.

After talking a while with Chris, its clear he knows his local brews. I was looking for Spiteful In The Weeds in a can which another local store knew nothing of, yet Chris knew it was recently obsolete. For having just one visit, its hard to imagine a better place with a more knowledgeable owner (I assume Chris owns?). I just wish it wasn't 6 hours for home.

4.94/5  rDev +3.6%
vibe: 4.5 | quality: 5 | service: 5 | selection: 5
One of the best beer bars I've ever been in...the selection is inclusive but clever... the service is impeccable... knowledgeable barkeeps that really know their stuff...there are no "filler" offerings on this menu...they also offer a special cask beer that's usually something you wouldn't expect....

This is a must stop in Chicago...

Taproom had a wide variety of styles and brewers on tap in multiple pour sizes. Had local, regional and import options on tap.

A ton of limited and cellared bottle options were available for purchase to drink onsite.

4.14/5  rDev -13.2%
vibe: 4 | quality: 4 | service: 4 | selection: 4.5
They have a very nicely micro-targeted collection of very small brewery and small batch beer for the ultra-geek, as well as some more widely known craft and Euro options. It really is pretty impressive, particularly in such a large city, with an additional walk in cooler that has plenty of space for browsing.

The cherry on top is the surprisingly large bar area with a moderate sized bar top and a number of tables to sit at. The taplist mirrors the bottle list in that it is very focused on unique, hard to find brews, whether there's hype behind them or not is secondary. Cool place overall.

4.76/5  rDev -0.2%
vibe: 4.25 | quality: 4.75 | service: 5 | selection: 4.75
5/13/19 (Chicago): Not sure why it took so long to reach The Beer Temple beyond the location, but well worth my first visit and can't wait to go back. Started in the tap room, over 20 draft pours including an ongoing cask conditioned handle, they offer a wide variety of brewers and styles at reasonable prices, especially considering the quality and availability of their offerings. Bartender was friendly, knowledgeable and provided great service to one and all. Bar and table areas nice and accommodating. Bottles also offered, either from the taproom or bottle shop, which is extensive in terms of styles and quality of offerings, including non beer offerings such as meads and whiskey. In addition to the four (two more than I originally planned on going in), I brought additional offerings home (new offerings and old favorites),with a second and third trip list of additional offerings I plan on snagging in future trips. Friendly and knowledgeable service and selection, I look forward to many future trips to the Beer Temple!
May 15, 2019
Rated: 4.72 by seanchai from Virginia

Reviewed by LeslieA from Illinois

5/5  rDev +4.8%
vibe: 5 | quality: 5 | service: 5 | selection: 5
I've known Chris and Margaret since before they had a store. Chris is very knowledgable. The staff give good suggestions. The tap list always has something new and/or interesting. You can find hidden gems in the bottle shop. This place is great! Support this small business with a great selection of beer, cider and specialty liquors. Why go anywhere else?
Oct 02, 2018
Rated: 4.55 by rcjennings from Ohio

Rated by Damian74 from South Carolina

4.68/5  rDev -1.9%
vibe: 4.75 | quality: 4.75 | service: 4.75 | selection: 4.5
10/27/17 since my original review, I've probably gone to The Beer Temple 10 times. All good.
But it is time for everyone to update the reviews because 7 weeks ago, Beer Temple moved across the alley to their combined taproom and bottleshop. The taproom is very well done, pleasant. It has at least two dozen beers and ciders on tap and many more in bottles ("The Beer Bible" is the list.) Almost everything else below holds the same. But you should visit the taproom.

original review from 3/23/16
This is 1.5 miles from home and been open for over 3 years and today is the first time I walked in.
(I guess I'm lazy about hunting, or try to maximize the yield by going to the big stores.)
I knew the associate from another store. Big-time knowledgeable. I met the owner doing an informal tasting.
I bought enough to stuff my tennis backpack. (The store needs a bike rack.)
I went home and went on their website. Placed an order. Impressive for a small store.
I will go there again shortly.

Reviewed by pagriley from Illinois

4.22/5  rDev -11.5%
vibe: 4 | quality: 4.25 | service: 4.25 | selection: 4.25
Great little store with helpful staff. Were pouring some really tasty out of distro beers as samples
Great sour and Belgian selection.
Prices are reasonable given that they are small and don't have the buying power of binnys - perhaps 50c or $1 more per bomber than the discount places, but the selection makes up for it.

Reviewed by CotterEU from Illinois

5/5  rDev +4.8%
vibe: 5 | quality: 5 | service: 5 | selection: 5
Best selection in the city. Not only is the inventory well thought out, it is highly combed through. I have never had a beer that was too old or past it's best by date. Nick always provides outstanding customer service and awesome recommendations every time I am in. This place is what a craft beer shop should be. Impressive.
Feb 09, 2016
Rated: 4.57 by tillmac62 from South Carolina

Reviewed by beardown2489 from Illinois

4.94/5  rDev +3.6%
vibe: 4.5 | quality: 5 | service: 5 | selection: 5
Chris Quinn has created something great. All the reviews below say enough. Truly a world class establishment run by a staff that truly strives to provide the best craft beer experience they can.
Bottle shops like this will never go out of style.
Feb 03, 2016
Rated: 4.97 by Gorf_Minor from Illinois

4.86/5  rDev +1.9%
vibe: 4.5 | quality: 4.75 | service: 5 | selection: 5
Down the road from Revolution, Beer Temple was my second beery stop in Chicago. What an incredible store! The neighborhood is a little rundown and not a place where you’d expect to find one of the best beer jawns in Chicagoland. They have some wine, bourbon and ciders from Spain, but you’re here for the beer.

Don’t miss the Chicago selection: Pipeworks, Spiteful, Mikerphone and every single Chitown brew you can imagine. Most beer is room temp, but the place is kept cool, and the IPA’s are in the cooler. The beer guy working the store was knowledgeable beyond belief, and fun to chat with. Can’t recommend Beer Temple enough!

Reviewed by dannycohen62 from Illinois