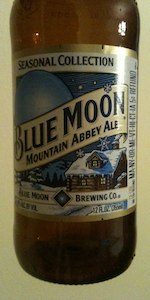 Notes: This copper-colored ale is crafted with roasted malts, Belgian sugar and a touch of wheat for a rich caramel flavor and a smooth toffee finish.
View: Beers | Place Reviews
Reviews: 49 | Ratings: 316 | Log in to view all ratings and sort
Reviews by BeerMeister8:

I got this in the Blue Moon sampler which I mainly bought for the excellent Blue Moon Cinnamon Horchata Ale inside it -and the Gingerbread Ale I have yet to try (hopefully it's good)- As stated in my other review, not too much of a Blue Moon guy.

I saw the description of Mountain Abbey and thought I'd give it a shot as well, and actually hoped it would be good...but I didn't hold expectations too high.

Smell: At first, it just smelled like a regular Macro American Adjunct, but on the second smell, I detected some sweet brown sugar, toffee and some pecan nuttiness. Kinda boozy smelling as well.

Taste: Blend of described flavors. Toffee blended into the sugar, the sugar blended in the nuttiness. The sugar and toffee were most prevalent, and strangely it tasted slightly boozy throughout at times.

Mouthfeel: Combination of smooth yet rough. It would switch at times.

Overall: Wasn't bad, but wasn't extrordinarily good either. It was simply, OK. If I were to be offered this at a party or on tap, I'd take it maybe, but I wouldn't regularly seek it out. I will say this though, if it were more fine tuned, it could be a little more than ok.

Some guys about crucified me on a facebook group for having this in a beer photo collection today.

Let's see if it's really bad or just okay.

Appearance : Pours a nice 1 finger head, pretty fluffy, off-white in color. The body is a beautiful orange-cranberry-copper hue. It's about 70% transparent. It looks good so far.

Aroma : There's not much here, it's pretty weak, but I'm getting nutty aromas, clove, caramel, coriander, and wheat malts. Real easy to identify the aromas, in fact I didn't even take longer than a minute to type this category out. They're all just so faint.

Taste : The nut and caramel come out immediately, walking hand in hand with a slightly coppery and wheat-y flavor profile from the coriander and malts respectively. It has a malty finish and faint hop can be tasted as well.

Mouthfeel : About medium bodied. The carbonation is sharp and severe, and the drink ends slightly sandpapery, perhaps pasty even, but heavily malted.

Overall : This beer isn't really that bad. It's an easy drinker, heavy on malts, light on hop, and has some real Belgian feeling to it. Try it if you haven't yet.

pours a dark reddish brown. very deep copper. two fingers of off white head that dissipate rather quickly. leaving a nice skim layer, but no lacing.

i agree with RETROMAN40 it has a rather adjunct smell. kind of like Busch copper lager. i smell some roasted malts, some spices, a sugary backbone and caramel.

malt at fist, then caramel taste with a coppery feel. a sugary warmth on the finish, which is bad since this brew is only 5.6%ABV. the after taste is gone in seconds, just leaving a sugary syrup feel/taste in the mouth.

mouth feel is light, coppery, and sweet. the brew is not watery, but lacks a quality feel.

overall this is not what i expected. Original Blue Moon was great, this however is not a great brew. its simply OK. the sugar content takes away from the smell and taste.

i liked this beer, but it's consistently bland. 1$ a bottle makes it a fair choice for while playing pool.

Pours a dark brown with a little red tint with a nice 2 finger head that dissipates slowly leaving a little lacing down a 16oz pub glass.

Smell is pretty weak but I can make out mostly sweet malts.

Taste is really good. I get the sweetness upfront then a malty character and a caramely taste in the aftertaste.

Mouthfeel is medium with good carbonation.

Overall, this beer is pretty good. I like the sweetness and it fits to be a winter beer. I would give this another try.