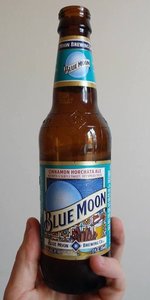 Pleasantly surprised with this one. Given that it is made by Coors Brewing and most other Blue Moon beers have only been mediocre, I wasn't expecting a lot. This turned out to be a great beer though. Definitely my favorite Blue Moon beer. It does have a decent amount of cinnamon flavor and aroma so if that's not your thing steer clear. Very refreshing and smooth. Great for fall nights around the fire. Highly recommended. It appears it is currently in a testing phase so I hope it passes muster with everyone else so I can continue to enjoy it. If you like pumpkin ales and other spiced beers you should definitely give this one a go.

This one surprised me. It poars a hazy golden yellow with minimal head and no lacing. The aroma is thay of straight cinnamon sticks. Flavor is strong cinnamon sugar up front, followed by Belgian yeasts, with a clean grain and (once again) cinnamony finish. Mouthfeel and carbonation is strong but pleasant. This is my first venture into spiced beer, so maybe I am biased. However it was undoubtedly my favorite beer in the Spring 2015 Blue Moon Brewmaster's pack.

First off, let me say I'm not a fan of Blue Moon in general. But that being said, when I heard about this beer, it actually sounded like it would be excellent, so I gave it a shot. I am glad I did.

Mouthfeel: Initially smooth, then after sitting and agitating in the mouth, it packs a balanced but rough cinnamon spiced punch. Almost reminds me of summer winds in the desert, when the taste lingers.

Overall: Great beer. Pleasantly surprised that I actually liked a Blue Moon/Coors beer. Tried regular Blue Moon, didn't like it. This on the other hand, is cinnamon gold. Highly recommended and really hope this becomes a permanent flavor.

I wasnt looking forward to drinking this. A dessert beer definately. Sweet, it does taste like cinnamon horchata and i rather liked it. I would buy it if i ever saw it in a 6 pack. Cinnamon and sugar is what this tasted like. A slight artificial flavor is present as well.

Look: It pours light gold with a white head that is a bit foamy. It does not have very good head retention.

Smell: The aroma is very sweet. It has aromas of cinnamon and brown sugar. There are also background notes of apples and nutmeg.

Taste: The initial flavor reminds me of apple sauce flavored with cinnamon. It certainly is quite sweet. There is some additional spiciness and nutmeg.

Feel: It has a light body and a sweet finish. It also has high carbonation level.

Overall this is a sweet beer with most of the flavors and aromas centered around apples and cinnamon.

i will be the first to admit that i dont hate this at all. its like a mulled cider or something, i get cinnamon but very little or no chili, which i am totally fine with, and then a real strange apple sweetness that i cant quite place. honey and cinnamon in the nose, i would call it wintery, but the beer is so light in color and body that it really struggles to work in that context. definitely unique though, with its use of cinnamon in a beer this pale. i find it rather drinkable because of the absence of the pepper, and because carbonation is way up. the sweetness hurts it for me, but i think it probably makes it more salable to the masses. more like spiced apple cider than beer, but i still kind of like it, and it certainly doesnt have any weird off flavors, but this whole blue moon, shock top, flavored beer thing is getting carried away is it not?

From a twelve ounce bottle freshness dated to December 22, 2014.

It taste like it's name but in a very one dimensional way.

The body has a decent mouth feel, relatively dry finish. The flavors are cinnamon, pale ale, and sweet. It just lacks a cohesive flavor and doesn't develop beyond the first layer of flavors.

Its drinkable but forgettable. Would I drink it again: No.

12 oz. bottle, bottled on date January 11, 2015? A new one to me from Blue Moon, acquired a single of this creation as part of a mixed six pack at the local Binny's.

A - Pours a lightly cloudy gold body, one finger of short-lived white head that fizzles away. No hop or yeast particulate is visible. No lacing. Looks okay.

S - Aroma is of cinnamon, and a sort of creamy rice milk aroma which at times doesn't seem entirely authentic. Some brown sugar & pale malt / indistinct fruitiness is in there also.

T - Taste follows the nose: a somewhat creamy rice milk with cinnamon flavor. It really does mimic the taste of a horchata quite well, although I can't really speak for the authenticity or natural flavors. Traditional "beer" flavor and bread malts are only slightly noticeable underneath the cinnamon.

Overall, an alright and accessible 'horchata beer' but no where near examples like The Bruery Or Xata. Not great, but worth checking out if you see it.

Holy shit, this smells like a candle from bed bath and beyond.