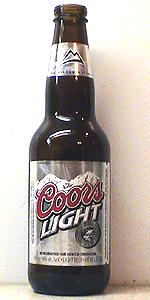 Weak on flavor, even for a light beer.

I bought a silver bullet 473ml at 4%.
In Canada.
Poured beer into glass with 1 finger head but leaves a little bit of a lace as you drink it.
Very clear clean golden color good carbonation.
Overall an ok light Beer
Cheers

One of the first beers I've ever tasted many years ago. I described it as alcoholic water that's been soaked in bread.

Years later, I'd imagine not much has changed.

So, I'm frequently prompted to drink this in a nearby neighbors' garage upon passing. I am frequently reminded that this is the very worst of all the macros, at least the popular ones. Surely there is worse beer possible, so I left room for those with my rating.

It’s not a classy, sophisticated, craft beer. I know it. The color doesn’t give you warm fuzzies about it having taste. It smells like any macro in its class, nothing special. All that being said, I enjoy an ice-cold Coor’s Light. It’s light on the palate, refreshing, and not overbearing. You don’t drink it to impress or prove your knowledge of beer. You drink it because you’re a beer guy and it goes well with burgers or wings. It’s also nice to have while watching football or a movie.

It’s not going to overwhelm you with anything but you know what you’re getting. It’s wholesome, it’s decent, it’s affordable.

Back when I was living in LA my roommate bought a case home. That night we had an earthquake. We drank the case and wondered why we weren't even buzzed. It's a silly beer. The next day I went out and got, I think it was called, "Drunken Voodoo" (it had a really cool dead tree illustration), but I digress, and will now get to the point, my roommate never drank Coors again. True story. AMEN

It's a cheap American macro light - you know what you're getting. About as good as it gets for the category. I much prefer macros with corn syrup adjuncts, like Coors, to others that are heavy on rice. Clean and refreshing when ice cold (but don't you dare let it warm).

for a light beers not bad but not great better in a bottle or on tap. has a nice beer flavor better then most light beers

From a bottle, pours as a clear yellow with lots of carbonation and a thin white head. Adjunct aromas with corn. Light and fleeting malt flavor with a metallic hop bite at the back end. Its best qualities are its carbonation and ability to drink cold on a hot day.

Toilet water. Just awful. No flavor and it looks how it tastes. Sure it’s cheap- but I would pay not to drink this.

You can't convince me that Coors Light isn't just slightly carbonated water left to sit in rusty paint cans and then bottled. It's an absolute stinker.

Everything that could possibly be combined into a single terrible beer in one bottle. Almost no flavor, and what taste there is seems artificial. I understand that they are making this for the American market, but it is actually an embarrassment to America when you export this crap.

This the "Summer Chill" edition. Looks and smells ok, like low end beer. Needs to be real real cold and then it is one of the better light beers for the price. Think it has changed over the years - maybe a more pronounced corn taste? Quenches a thirst, not the beer taste buds. Bought to drink when boating and swimming in hot weather.

My first experience of Coors Light (Or Just Coors) here in Australia (as it's classified as full strength being 4.2% ABV), was several years back when Coca Cola first started importing it. Some friends and I had just finished watching a football (soccer) game at Belmore Oval, and we went back to the Belmore Hotel to have a few post-game beverages. Turns out the pub were running a promotion, something like a bucket of Coors (4 bottles) for like $15. Needless to say, being Uni students at the time, and also free pool, we took to it like a Pitbull at a postie. The little I remember of that night, I remember the bar tender telling me they'd be convinced by Coke to order way too much of this beer, and run a promotion on it, assuring the owners of the pub that it would sell like hotcakes. Apparently they'd barely made a dent in their stock, with the locals sticking to local adjunct lagers. My mates and I basically cleared them out of their Coors stock - which I think they were grateful for. Now, I don't remember if I liked it, but we certainly drank plenty of it given how cheap it was.

Taste: Grains, slight floral flavour, sparkling water with a bit of beer in it. Honestly tastes like a mineral water shady. Hard to pick up any major flavour notes.

Feel: Watery, carbonated, Would be mistaken for a flavoured mineral/soda water. I suppose it would be refreshing when it's hot and the beer is ice cold, but so can a glass of water, or cold mineral water.

Overall: I hate reviewing beers negatively. But I only do so when there's absoloutely nothing I put a positive spin on. Sure, it's Refreshing when it's ice cold, but why waste the calories on a flavourless beer? If you're looking to get tanked, I mean sure, you can knock these back one after another, until you're inebriated, but why knock back 20 of these when a decent flavoured beer will do the same?

Dunno, I suppose there's a place for it, but my fridge unfortunately isn't it. There's plenty of mediocre Aussie beers that I can drink for the purpose of being inebriated, I honestly don't see the market for this in Australia.