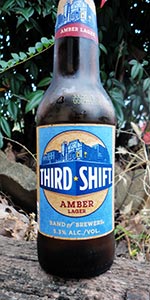 Reviewed by JeremyDink from Ohio

1.41/5  rDev -53%
look: 2.5 | smell: 1.5 | taste: 1 | feel: 2 | overall: 1.5
This beer appears to look like a proper amber lager in terms of its medium color and adequate head upon pouring, and even slight lacing. The smell is okay, but does not give proper warning as to the taste you will experience after consuming this beer. The taste is bitter, stale, and reminiscent of the smell of wet cigarette butts. I don't know how this beer is still on the shelves.
Aug 13, 2018

Reviewed by Nass from Florida

3.64/5  rDev +21.3%
look: 3.5 | smell: 3.75 | taste: 3.75 | feel: 3.25 | overall: 3.5
12oz bottle bb 9/25/17 poured into a vintage Coors bulb glass at fridge temp 5.3% ABV. The beer pours bright golden amber with about an inch of off white head. The head recedes to a splotchy film with some lacing. Lacing continues down the glass as the beer is consumed. The aroma is caramel malt reminiscent of an American Marżen. The taste is malt forward as well with a Munich or Vienna taste up front followed by a hint of AAL in the finish. There is a noticeable bitterness on the end to cut the malt. Mouthfeel is thin bodied, sharply carbonated and dry to finish. Overall, good. This is proof Coors can brew a decent beer when they use their budget on some cara malt and not advertising.
Jul 15, 2017

Reviewed by Schlitz74 from Illinois

Reviewed by NudeOnTheMoon from Indiana

1.52/5  rDev -49.3%
look: 4 | smell: 2 | taste: 1 | feel: 1 | overall: 1.5
A bit of background is necessary to put my review of this beer into context. I have been using this website periodically for the last few years, but only as a casual source of information when I come across something new in a grocery store. Despite a deep fondness for beer, I've never been a particularly picky man. I'll gladly drink any craft beer, macro, or 40 ounce bottle of malt liquor that slides my way.

In short, don't buy this beer. If you're at a party and it's the only beer available, consider passing on it entirely and enjoy driving home with a clear conscience and a hangover-free morning.

Look - (4) - Best category by far, in that it manages to do a decent job passing itself off as beer. It comes in a bottle you'd swear was from a craft brewery in the mid-west (turns out it's made by Coors), and pours into a glass with a dark amber color with a luscious head about a 0.5" high. Visually, it's the spitting image of a real beer. It even has real bubbles.

Smell - (2) - This is the second best category, and it's where things start falling apart. Despite all appearances of a craft beer, the beverage smells about as good as a cheap 40. Seriously, a bottle of Olde English or King Cobra will smell just about as good and be a WAY better use of your money.

Taste - (1) - This is where the piss-poor attempt at being beer unravels completely. There are three distinct notes. The first thing you taste is the very prominent flavor of malt liquor. This would be fine if not for the bold taste of high fructose corn syrup, which manages to bind the former flavor on your tongue with the enthusiasm of a determined mall kiosk worker trying to sell you a hair straightener. The third flavor is honey.

Feel - (1) I guess I have to give it a point for being a liquid. It feels like diluted maple-syrup.

In closing, this beer is absolutely terrible. It's the only beer I've had in a decade of drinking bad enough to complain about on the internet. I honestly wish I had purchased a six-pack of Hamm's instead, because it would be easier to drink and I would be out half as much money. Seriously, this beer is garbage.

Reviewed by tblee12356 from Hawaii

3.79/5  rDev +26.3%
look: 3.75 | smell: 4 | taste: 4 | feel: 2 | overall: 4
I took a leap of faith and grabbed this Third Shift Brewing Company 6pack to have something delicious before bed. It's priced right for a microbrewed 6 pack but I learning that it's made by Coors disappointed me. However it surprised me and is actually very good. It's weak for a craft like brew at %5.3, but surely does not lack flavor. Following a hoppy aroma and a very rich roasted malt, with what seems a bit Bavarian flavor. I think Third Shift Brewery's Amber Lager could be a bit smoother, but over all is very pleasing. 4/5 Would drink again.
Jul 28, 2016
Rated: 2.57 by jbf190 from West Virginia

Reviewed by JustLikeMyDad from Michigan

Poured into a beer glass of some sort. Pours a nice copper color with a middle fingers worth of foam thickness.

Smells like a beer, maybe some light malt or wheat notes, nothing strong, but nothing too plain.

Feels very thin, rolls down so quick and easy, it's like it's hardly there.

overall, kinda disappointing, priced slightly more than budwieser for a 12 pack of bottles, the taste is slightly better than.
It's okay, but I don't think I'll be getting it again.

Rated by Beerma from Ohio

Reviewed by AndrewMichael from Virginia

Well, it was there so I had to try it. Not a disappointment, rather not a happy find. Apparently Coors Research decided something like this would sell and it probably does, though I'm the only guy in my group who has actually bought some. Pours like a Coors beer, little more flavor than their regular stuff, but I wouldn't call it malt or hop forward. Not bland, just not quite medium either. A tweener without enough going for it to be interesting.

Not bad, buy it, just have realistic expectations.