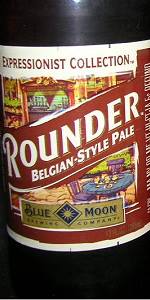 L - Amber color. Clarity - clear, no haze what so ever. One finger of white head quickly dissipates. Leaves only thin ring after a few moments.

S - I smell mostly malty notes, and a bit of bread. Also I smell bitterness from hops and citrus. Slight floral quality. Smells a bit tart.

T - Initially sweet. Taste mostly of malty, bready. Then shortly after a drink it is noted of citrus and hops. After taste is hoppy with some tang in the back of mouth. Probably related to the cascade hops and hibiscus. Alcohol was only noted after taking a drink, or a few moments after.

M - Medium. Slippery even though its carbonated fairly well. Not over carbonated. Buttery and oily, very easy to drink. (Did make me a bit burpy, could be even better if it were carbonated less; strictly my opinion I did not deduct for that)

Overall it is a better than commonly found, macro brewed beverage. It is easily found where I live (Saint Louis in A&B territory), and could be used as a transitional beer for the non beer drinker if you know what I mean. If I were in a place where I only had big brew options, I would get it if it were there. It isn't overly complicated, and not stupidly simple. Drinkability is high, a 12 pack wouldn't last long amongst a few friends. It is worth a shot if you are wanting to try a readily available, year round Belgian-Style Pale Ale. At 5.6% ABV I like it. It is probably one of the better beers produced by Coors and its Blue Moon labeled brethren. And for that, and everything mentioned above, a 3.5/5 overall is more than gracious.