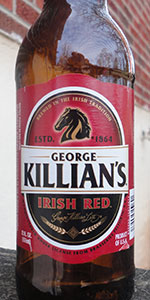 Rated by datstankadank from New Jersey

Notes via stream of consciousness: In 1996 the Coor's version of this beer was one of my favorites and so when I visted Ireland I made sure to stop by Enniscorthy to see if I could find out anything about the brewery. They have (or had) a little visitors center and history 'museum' there and I asked if they had anything about the brewery. The answer was that no, they didn't have anything but the brewery was right down the road and now it's a soda plant, and if I wanted to catch him George had just passed by with his dog and shouldn't be hard to . Well I wanted to chase him down and at least ask him about the recipe but my wife of the time was having none of it. Disappointing. I should have just ignored her and hoofed it up the road. Anyway, this is not the same beer. The original Coor's version was just 3.2% alcohol by volume and this is 5.4% - that's a big difference. Let's see what it's like. It's poured a deep copper colored body beneath a thumb's width of dense off-white foam. The aroma is lightly sweetish, caramelish, and leafy and earthy. I'm going to guess that they're using Fuggles but I could be wrong. It's also a little bit fruity with apple. The flavor follows with more fruitiness than I remember it having 26 years ago so I could be wrong. The caramel character remains and it's cereal likeand bready with golden caramel, medium reddish caramel, and a bit of an even darker caramel that's like almost burnt sugar to give it a little bit of an edge. The hops appear more grassy than leafy, and there's not as much earthiness as I thought there would be. Sometimes you pick up a little too much on your first whiff. A moderate bitterness balances it bringing it to a mostly dry finish although a dollop of that sweetish and caramel-like maltiness lingers shortly with some leafy and earthy hops. That's very much how I remember it, and looking back it was probably that sweetness that I enjoyed. This, however, seems sweeter than the original Coor's version. In the mouth it's medium bodied and surprisingly smooth with a moderate and very fine-bubbled carbonation. The head held up OK, and it's left some decent lacing about the glass but it's not great. In the end I think it's a pretty good take on the original and I completely understand why they'd increase the alcohol content. Personally I'm happy with lower alcohol beers because you can enjoy more without getting loopy. In fact, at the time English ales were my favorites and I guess I'd group this in with those. It's interesting how you forget about things, but then you can remember them very clearly once you're reminded of them.
Review #8,038

3.44/5  rDev +12.4%
look: 3.25 | smell: 3 | taste: 3.5 | feel: 3.75 | overall: 3.75
Most people think of Guinness when thinking of Irish beer. While I love Guinness, it's too much of its own thing to be a casual drink. Killian's Irish Red is a casual Guinness. both are red, with the up top sweetness and the bitter almost coffee-like note at the end of the swallow. But these elements are subdued in comparison to the bold statement of a stronger Guinness beer. For its departure from strong elements I enjoy this beer. The alcohol is at a good spot, right in the middle of water and bringing out the idiot after two beers. This hits all the targets for an Irish Red beer without an over-the-top delivery. Can't say much about the looks as it is simply red, but inviting. Smells are of malt with chocolate and caramel like a candy, but not excessive, again subtle.
Apr 02, 2022
Rated: 3.08 by megamick from Iowa

Reviewed by Valdez_Mescalito from Michigan

Look - Pours a thin white head that leaves light lacing. Clear, light red appearance with tons of streaming bubbles.
Smell - The scent is toasted sweet caramel and it's hard to pick up anything else.
Taste - Taste follows the nose with no bitterness and minimal sweetness.
Feel - Medium bodied with a crisp mouthfeel and a slightly dry finish.
Overall - A very drinkable lager for St. Patrick's Day.

This was WAY better than I expected, and could be enjoyed just about anytime.

Smell is faint. Yet getting some caramel and toasted malts. It is faint but still rich smelling.

Taste is nice. Easy flavors or light if you will. Getting a touch of caramel and some toasted malt notes. Again like the nose the flavors are not pronounced but smooth.

Mouth feel is fizzy and light with a crisp finish.

Overall this is an extremely sessional red lager. Some of these can be a bit sticky or a wee bit heavy. This is none of that this is a red beer made for drinking. I would love to have this on tap when I am a bar somewhere with my wife and or some friends. The flavor is nice and easy. The beer looks nice. And the ABV is not going to knock you around as long as you pay attention. Because this does drink very easy. I can remember having this way back in the day in Colorado as a younger man. That was years ago. It is sometimes really good to re visit an old friend. Cheers!

Relatively headless on the end of the pour a not so fine layer of bubbles formed that quickly dissipated into a ring around the outside of the beer sticking to the glass. Crystal clear and a light reddish brown.

Smell is largely Coors-y lager but is redeemed from failure with some subtle caramel roasty scents coming from the malt. Maybe a hint of some hops bit unsure.

Taste is better than either the look or the smell thankfully. The roasty malts come through stronger while I'm drinking and there is a light bitterness, presumably from the hops.

Feel is quite light almost watery, definitely an easy drinking lager that looks nicer than it is. While I drink it I can tell it's not actually irish.

Overall good for coors, but not quite as good as I've seen them do. I feel like the body could've been stronger and more present but it is what it is.

Reviewed by Storm_Rryder from Iowa

Reviewed by Aichelberger from Maryland

3.89/5  rDev +27.1%
look: 4 | smell: 3.75 | taste: 4 | feel: 3.5 | overall: 4
A solid "4" in the rating department. Tried this many years ago and didn't think much of it. Tried it again--after all these years of drinking others--and found it to be a pretty decent, drinkable amber. Frankly, I like the style and the off-tastes that I remember from all those years ago were nowhere to be found. Nice brown/red in the glass, with a hint of malt in the nose; but a warm, decent roasted flavor on the tounge. Not too sweet and lighter in the mouthfeel, with a hint of bitterness at the end. Very drinkable. Nothing to write home about, but definitely something I'd buy in the future just to balance out all of the hoppy offerings that fill the fridge.
Oct 31, 2021

Reviewed by xmanden from Michigan

Reviewed by WaterBoar from Pennsylvania

3.1/5  rDev +1.3%
look: 3.75 | smell: 3 | taste: 3 | feel: 3 | overall: 3.25
I got this beer.... when... lets say I was "old enough to drink" and leave it at that. I thought I was getting something cheap, exotic and foreign. WHAT A MORON I was! I made bread with this beer because the bottles got warm and I was not about to let it go to waste. If you need a beer to make beer bread, this is it! For drinking this is ok, but it is trying to be Irish and I remember them using an Irish guy in an Irish Pub telling me how great it was so I gave it a whirl. I wish they spent more money on making good beer than making clever advertisements. I feel like I have been had! The bottle label kicks ass but the beer needs something. Maybe a better grain selection. The color is cool if you pour it into a glass.
Sep 18, 2021
Rated: 3.75 by Wilkolaczek94 from Connecticut

Rated by Chocolatefreak from Tennessee

Reviewed by blazerkor from Nevada

It's watery and indistinguishably sweet. It also has some dank hops in the distant background.

It's thin as water with a small amount of fizz. The finish is short and bready.

Reviewed by AccipiterofBeer from New York

3.48/5  rDev +13.7%
look: 3.5 | smell: 3 | taste: 3.75 | feel: 3.5 | overall: 3.5
Poured moderately hard from a bottle into a basic glass, forming a finger of off-white head that soon faded to light lacing. Burnt-orange/red color, maybe 50% transparent. Smell is maybe a hint of hops. Taste is some caramel, a little bit of breadiness, and some hops at the end. Drinkable, nothing complicated. Light bodied with moderate carbonation. Perfectly average red ale.
Mar 19, 2021
Rated: 3.39 by Mulechops from Kentucky

Reviewed by OllieStalz from New York

L - A sticky, reddish-bronze. Leaves a one-finger tan head.
S - Caramel and yeast are the most prominent here. Hints of copper, barley, and shortbread. Slight stone fruit notes.
T - Flavor follows nose. Caramel, rye, toast, and some earth.
F - Little carbonation. Very sticky, yet not very thick. Refreshing for sure.
O - Surprisingly good for a macro. Refreshing, filling, and something I'd definitely drink again. Not complex per se, but tasty for sure.