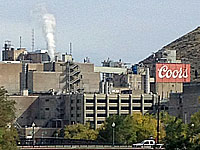 3.86/5  rDev +14.5%
vibe: 4.25 | quality: 3.25 | service: 4.75 | selection: 3.5
Went on a tour earlier this year. Only 10 bucks for 3 beers and a relatively decent if not dumbed down tour. The vibe is cool with some older brewing equipment like copper kettles still in use and a 50's feeling brewing room in the south facility where tours take place. The bar and gift shop are a bit corporate and dated feeling but hey it's a factory tour.

Quality is coors and colorado native. I'm sure you have your own opinion already, but it's a bit hit or miss. Coors is pricey for what it is bit a code colorado native beers are pretty good and I wouldn't turn down a beer from this place, but I've never turned down a beer in my life yet.

Service was actually very good with the tour staff being very attentive and people based, not tension quite proud of their brewery.

Selection was alright, I had a banquet, colorado native lager, and I believe a colorado native IPA while on the tour, but in the gift shop there is some togo beer that can be hard to find elsewhere.

Reviewed by Charter11 from Connecticut

3.7/5  rDev +9.8%
vibe: 5 | quality: 1 | service: 5 | selection: 5
I love this beer Coors light is the best keep adding logos on cans. Keep drinking Coors light we will get through this national emergency,then we can all have a big party with of course Coors light-there is light at the end of this tunnel be safe and enjoy this beer.
Aug 29, 2020
Rated: 4.15 by smcneave from Maryland

My first tour was in the era of Legality in selling the brew to the Eastern states. Because It was made in Colorado, but because it wasn't pasteurized and contained no preservatives, shipping could get a little tricky To Eastern USA. Plus in the time of "Smoky and the Bandit" It made Coors banquet an extremely desirable brew.

But the first tour was unscheduled and a walk-in. I am not even sure they had scheduled tours at that time, I just came out of Blackhawk and Central city, after a 5 hours binge of losing my butt off. I was told about a magical place of free beer and good talk. I wound up at Coors brewing Company Golden Colorado. I knocked on the doors, in the admin office, they directed me to a Larger facility down the hall. I was able to walk right through the corporate dull drums of the time and into the actual Crafting facility. I cannot recollect the name of the man, I meet, he was older around 62 with Leather skin and smelled of hops and yeast. The man was a genius, talking about the brewing process and the Specific recipe of the Beer. There were not as many as there is today back then. Coors had not molded with Molsen or Miller. It was a huge Golden larger age. Where you have the Black and white landscape waterfall on the cans. A time of Youth and love. Before the now tour choices surmised a Crippeling 70 + Beer menu to choose from.

The first visit would have gotten a 5 all around, The vibe was laid back and fun, People smoking in the admin building and on the brewing floor, Back when living life and having fun at the job was not taken to seriously. and you might not have been able to tell them apart. Back then the service was "Hey brother ~! take a beer and pop the top" and the selection of the time was Good ole original, light, and banquet. No real thrills no real heartache. Just being in the here and now of it all. A mass distributor, a Palace of Dreams.

My Recent trip proved less fun, it was more historical, learning about Adolf Coors, and his recipe and his acquisitions of other companies along the way, expanding the choices to over 70+, Ushering the new era of money-making, if Adolph was alive today, He would scowl and Temper up at what his legacy has become. It's changed for fun-loving fancy-free, to a For-profit (anywhere you can get it) micro-managed, nickel and dime museum. Animatronics are crap, The Off the street, Millennials are Half witted and refer to a clipboard half the time. No enthusiasm no real Heart left, Instead of a man with leathered skin, and a hell of a sense of humor, they have Lab coats and masks. There are no longer pallets of beer, with an all you can drink attitude, its a Plutheria of Keggers and Taps with tiny Beer shot glasses. And a limit of 3 taste tests before you get into the big bucks. $1 a shot try all you want. $55 for the complete tour, save over $15 With an obligation to spit or sip. (UUUGGHHH) What has this facility become. ? It was hard to rate the once-great enterprise of comradery and friendliness So I took the new-age vibe and slammed it with a 3.25 ~ the quality is not lackluster for the beers now offered. as I took the tour for $55 But the odds outweighed the Evens. if you know what I mean, So a 4.25 combined score, the service of the bartender and the Old man is still a 5 (dead on) They are quick-witted and fun. Now having to take the selection into account, it would still be a 5, there are many other breweries that can offer more than 100 beers but where can you go to tour them all for less than $75 bucks.

As for a recommendation from me, This is more of a Liberal establishment built on the almighty dollar don't go here to drink, Go here to taste and buy a few 6 packs on the way home.

Rated by KennethDouglas from California

Rated by Btru from Colorado

3.39/5  rDev +0.6%
vibe: 3.75 | quality: 3.5 | service: 3.5 | selection: 3
Worth taking the tour at Coors in the Golden facility. The set up is a little clunky, what with the shuttles from the parking lot. You need to get there early because the line builds quickly. It is a brewery on a massive scale, so interesting to see up close how they do it. The Banquet beer (all of which is brewed on premise) is cold and fresh. Loved the gift shop too.
Jul 08, 2017
Rated: 5 by kparamon from Indiana

Rated by Bluemoonlover555 from South Carolina

3.1/5  rDev -8%
vibe: 3.25 | quality: 3 | service: 3.25 | selection: 3
Have toured Coors several times while in Colorado for vacation or business. As this was before I really got into beer, I would learn lots more now. The tour showed the entire process of a moderately large brewery, and ends in their taproom. The first time I visited in the 80's I don't recall much of a limit on how many you could sample, but later visits seemed like they were much more responsible in ensuring you don't leave drunk. At the time I went on these tours, I was into Killian's and was excited to see where it was made. On my last visit I'm not even sure it was made there anymore.
Jun 06, 2016
Rated: 3.25 by kyle_goochstink from Michigan

Rated by BeerDaveGA from Georgia

4.39/5  rDev +30.3%
vibe: 4.5 | quality: 5 | service: 4.5 | selection: 3.5
Only 5 I've ever given. Can't beat a free tour of an iconic, legendary facility with free samples; all you pay is your time (which some can make a joke about even that not being worth it, but those people are idiots). Extremely transparent tour of how beer is made, with some impressive sights along the way, culminating in three free good-proportioned samples of whatever beers you want (and more along the way).
Of course this page is going to be character assassinated just because it's a macrobrew factory, but don't believe it. Just as we say don't review a beer if you can't be fair to they style, don't review a place if you can't be objective. Reading about people looking down their noses at the free, well thought out tour and free beerSSS, when they know that's what this place makes? It's insulting and ugly. Seriously, no one forced you to diminish this beer beacon with your lowly presence, and you didn't even have to pay a cent.
Value can't be beat. Legendary brewery. Service was fantastic. Highly informative, both about beer in general and Coors in particular. If you have an afternoon to kill, this is a must. Did I mention it's all FREE??

Rated by Vczk2t15 from Ohio

Reviewed by SCW from New York

Reviewed by donnierickles from Michigan

Rated by rossracing from Illinois