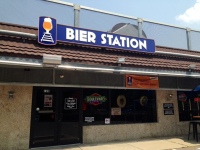 View: Place Reviews
Reviews: 18 | Ratings: 48 | Log in to view all ratings and sort
Reviews by LambicPentameter:

This is a great resource for beer lovers in Kansas City. The atmosphere is nothing fancy, but it's a laid-back and casual place with a bar and various table sizes. They also have a "beer garden" upstairs that has big glass garage doors on the sides that I'm sure will allow for a nice drinking area when the weather warms up. But ultimately, the most important part about Bier Station is the beer. The atmosphere just needs to be comfortable.

They have 20 taps that rotate on a very regular basis, which allows them a lot of flexibility. They get keg-only releases like Green Flash's recent Black IPA, but on a recent visit they also did something that I hadn't heard of before. They had GF West Coast IPA on tap, but it was "randalled" with mint and mango. I guess randalling typically involves pouring the beer over fresh hops at the time of serving, with the idea that the alcohol will strip the hop oils into the beer and make for a bigger hop kick. In this case, I suppose they did the same with mint leaves and mango. It was subtle enough that it was probably wasted on anyone who hadn't had the West Coast IPA before, but I found it made the beer more refreshing.

In addition to the taps and a menu featuring a moderate selection of charcuterie, cheese and pretzels (I haven't sampled their food), they have a wall of traditional glass coolers like you see in a regular liquor store. The coolers are stocked with a wide variety of sixers, bombers, 750s, and even singles for creating build-your-own 4- and 6-packs. The build your own can be a little pricey to take with you (their beers have a to-go and a drink there price), but that's because they offer some beers that I haven't really seen being sold as singles in the KC area.

My most frequent experience with Bier Station is going to pick out something to take home, but I typically will grab a glass or taster or two from their taps while I watch a little TV and pick out what I want. Eventually I'll have to try some of their food.

I'll finish by saying the service is really good. The staff are all super friendly and helpful, and more than willing to answer a question or provide a recommendation. Bier Station also hostso special event nights. I haven't been able to attend any of these events, but the last one I know of involved a few representatives from a nearby Lawrence, KS brewery (Free State) coming in to offer samples of a couple of their beers and giving away some free Free State tulip glasses.

Hands down, the best Beer Bar in the state of Missouri. I refuse to go to KC without stopping at Bier Station.

I really liked this place. The draft selection was quite unique and well thought out, with an excellent combination of local, craft and foreign brews. This is a beer enthusiast's destination, and you will not be disappointed. Very laid back, kind of a Bernie Sanders' supporter type crowd ( disillusioned, but mellow and hoping for the best). The pulled pork KC Carolina sandwich was very good and paired well w/the Zipline Smoked Bock that I was drinking. Followed that up with two flights of beers that I've mostly never seen on tap anywhere else. Been to a number of places during my four week stay in KC, and this place was definitely the one that caters to the beerdo in all of us.

super worthy destination. Huge selection, friendly staff, chill location, outside areas/decks to imbibe upon...just go...they have what you are looking for.....

Inside is dark, with dark wood floors and dark tinted windows. A bar running the length of the opposite side of the room offers up space for patrons and to order beer; unfortunately, there is no sectioned off area to order beer, making it a bit of a pain on busy nights. A long bar-like bench with high top chairs sits opposite the bar, up against the windows for a quiet, contemplative place to sit. The remainder of the main floor seating is 4-tops and a handful of longer tables with benches. The space faces north, which makes for some nice sun on the exterior patio. Upstairs is an open space with astroturf, garage doors for ventilation in the mild months, and German beer hall style tables and benches. The heating and cooling in this room can be very hit or miss, and stays a little warmer during the hot months of summer. Overall feeling is relaxing. Service is good, but can be a bit slow at times, particularly since the bar staff seem to all be long standing employees with many regular customers returning and chatting. Service is best on slow to medium days. Selection is solid, with a focus on American craft beer, meaning very few imports to select from here. Packaged beer is split about half and half between being sold individually, either for a mix-six pack (individually priced bottles/cans) or for consumption on site, and in packs. The 30 taps offer a wide array of styles and selection, but do tend to center on IPAs generally without fail. Food is quality, especially for the lunch special (most any beer is $4 with the purchase of a meal), but not the reason to make a stop. Specials are available throughout the year as well.

Everything about this place is amazing. Great staff. Great draft selection. Love the option of having 4 oz. pours as well. Amazing prices and an awesome bottle selection for on-site consumption or to-go (though to-go prices are considerably lower). Cool deck area upstairs. This place simultaneously functions as one of the best bottle shops in the area, and being a kick-ass bar. I would really like to get back here some day.

This is one of the best places - ever. I missed this one on my last trip to KC and never again. Great selection of beers from all over, although a bit weak on beers from the West Coast. However, this is an all around great place with a huge selection of bottles and a great tap list.

This is one place that I'll hit each and every time in KC. It's perhaps the only "don't miss" if you have only one place to go.

Large open seating area inside with some outside options, too. I love the beer board that lists details including how much is left in the keg. Selection is strong. The beer to go is nice too, although they did have an old beer hidden in there that I accidentally purchased.

Stopped in during a trip to KC, to find a craft beer bar that seems deceptively larger inside than it appears from without. The tap list was quite decent, and kept updated on a couple large-screen monitors above the bar, complete with little keg gauges to show approximately how much is left of each beer.

Bar staff seemed to really know their beer, and there's a sizeable bottle collection that takes up an entire wall of coolers, either for on-site consumption or as a bottle shop. There's a relatively small and simple food menu, which includes some particularly tasty brats. The crowd is friendly, the atmosphere laid back, the feel much like a comfortable little dive bar.

Would return if ever back in town.