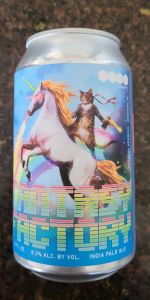 Notes: Hopheads crusade on a heroic quest for the holy grail of India Pale Ales. The subconscious composes paradisiacal scenes of malty waves crashing on a ripe lupulin landscape cascading hop flavors and aromas in profuse abundance. With humble confidence we offer this brew as fantasy made reality. Balanced in every detail and gushing resinous, exceptional citrus flavors and aromas that collaborate with soft bready notes surrendered from premium English golden malted barley, this beer is a tropical dreamscape. Epic.
View: More Beers | Place Reviews
Recent ratings and reviews. | Log in to view more ratings + sorting options.
Ratings by nickapalooza86:

Pours very similar to the Ale Asylum beers when they were brewing on this system, super hazy little head half finger if that, but super hazy... Nice deep orange color

Smell well ya this is Citra hopped, big grapefruit, pineapple, nice tropical burst followed by a heavy pine residue, getting some nice crackery malts underneath

Taste is grapefruit first, some orange, big on the pine resin, definite malt backbone with mostly bready tones cuts through in the middle, but as soon as it came is gone for some lemon and grapefruit bitterness.... Wow just wow amazing

Mouthfeel is medium light, very dry as one would expect from this hop assault. Some nice coating resin.

Well glad I grabbed I grabbed a case on my family Christmas trip to the Dells/Baraboo area wish I would have grabbed two.

Once this because widely available I no longer see the reason to pay a bomber premium for PsuedoSue... Well don Karben4!!!! Well done indeed.

This beer brings me back to the first time I had it, back when my sister lived in Madison and was homesick so it gave me an excuse to visit friends in the area. My one buddy took me to this brewery and I became a fan of this beer for life. It reminds me of a better version of Summit Saga - just a good IPA for lovers of the style. Foggy, stinky, hoppy, bitter, enjoyable - that's my review. I could be critical but I won't

Appearance: Pours a medium golden to pale orange color with a strong white head. SRM of 10-11 (4.25)

Flavor: The flavor follows with more herbs, pine, and grapefruit. Some dank unripened pineapple. Hints of green banana.A pine and slightly sweet citrus on the finish. Finish is bitter.

Feel: Medium to light bodied. Moderate carbonation, but relatively strong. A smooth finish with some bitterness.

Overall: This was a more bitter and herbal IPA than I expected. I didn't get a whole lot of the tropical fruit that the site has described. Herbal and bitter, but not quite my style of IPA. (Final Rating: 3.72)

This beer was rated within the style.
Poured from a 19.2 oz can into a boot glass

S: smells like an IPA. Complex mix of fruit, hops and bread crust.

O: the can is interesting, and for an IPA its more rounded than I anticipated. Price and abv considered i would surely recommend this beer.

Could not find a bottle date on any of the packaging.
Golden color with a slight haze. Solid head forms and plenty of lacing is left down the glass. Floral hop aroma with citrus but overall it is timid. The malt flavor is dry and slightly musty. The dominant hops are floral with citrus being secondary. I was expecting more hop flavor but bitterness is moderate. Medium body and appropriately carbonated. Good texture for an IPA.

Poured from a can into a pint glass. Pours deep orange with a small white head. Smells of citrus and floral hops, nice mixture and inviting. Tastes of citrus and earthy hops and slight pine. Beer is light bodied and easy drinking, good carbonation. Overall, a very good beer.

L: Good golden color with some haze.
S: Citrus with a nice toasted malt.
T: Initial flavor is just all bitterness followed by some citrusy tropical notes.
F: Very bitter and is slightly dry.
O: Not the hop profile I usually enjoy but this was fine.

12 oz can from Tavour. The artwork alone gets this beer points. Medium golden with small soft head. Aroma is fruity, like a tropical Lifesaver. Hops first on the palate, more tropical fruit trailing behind. A bit if a dry finish.

Whipped up and frothy head of off-white foam with no retention. Soft haze, driven mostly by a large amount of small particulate floating in the glass, light amber in color. Disjointed nose of undercooked dough, pepper, campfire ash, bubblegum with cantaloupe, pear, apricot scents, minimal if any citrus, the more you sniff the less you like it. Medium-bodied, firm from cheek to cheek and suffers from a metallic bitterness and oily earthen, ashen quality. Lots of malts, something like corn syrup, and cocoa powder. No fruit, no citrus. Unsure what was supposed to be enjoyable here and have basically run out of words to say. (Bottled 7/15/19)

12oz bottle, date stamp is smudged. Thanks to Derek for giving me a bottle to try! Amber colored ale with a frothy beige head that quickly dissipates to a thin layer of foam. Aroma is sweet caramel malt with earthy pine and faint mango & citrus. Flavors are balanced with notes of caramel malt, grain, mango, orange, and earthy pine. Full body, resinous hop oils, ample carbonation, bittersweet finish. This is a well crafted American IPA - kind of a hybrid of new school and old school IPAs.

Had at Woodchucks game August 1, 2019. The hop flavor didn’t have the finish I’m a fan of but it was ok in a tap lineup of of wheat beers and ales.for my taste and liking I’d give it a B-. Just skating by with my type.