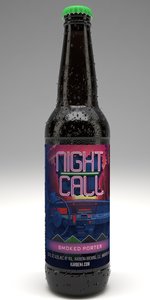 Notes: Robust all day without dictating your life, this is the porter that other dark beers hang a poster of on their own bedroom wall. Malt sweetness is just present enough to enhance the dark chocolate and roasted coffee flavors without destroying the drinkability. This brew provides a subtle smoke profile that simultaneously creates new fans of dark beer and tames the beast inside the bold-beer aficionado.
View: Beers | Place Reviews
Reviews: 11 | Ratings: 95 | Log in to view all ratings and sort

Pours oil black with a beige head. Smells of smokey malts. Has a strong molasses taste, with a smokey malt finish. Mouthfeel is a little heavy. Overall, decent beer.

Karben4 Smoked Porter. This pours black and oily as can be with a tight beige head.

Very mild smoke on the nose, some roast malt, light chocolate and something that seems like cherry.

The taste is pretty good, but very mild on the smoke. Chocolate, slightly sweet, and it starts to taste a bit like Dr. Pepper in a way with that vague cherry-like fruity thing going on. Note a bad beer, but a little twist in the taste that I am unsure about.

It feels a lot thinner than it looks and is slightly prickly with the carbonation.

Overall this is certainly drinkable, easy going, but I could use a bit more of the smoky character in this one. For someone unsure about smoked beers, this would be a good entry level.

I poured a 12 oz bottle into a dailyware porter/stout glass. It pours jet black with a moderate brown head that dissipates quickly, eventually down to no head at all. I could barely smell anything, though I detected some maltiness.
The taste is the best part of this beer. It tastes very much of roasted malts with a fine compliment of smokiness. It has a medium body with a slightly smoky finish.
In short, this beer is the perfect beer to have while sitting in front of an open fire. This beer has changed my opinion on smoked beers and this is actually the second time I have purchased it.

On tap. Poured a semi-opaque, dark, dark brown color with a small, khaki-colored head of foam. It smelled of chocolate and toffee with subtle smoke. Roasted malt and chocolate taste with a good deal a smokiness.

Not much smell. Some malty roasty aromas. Poured from tap with a nice dark black body with a small head. Light flavor. Tastes good, but kind of lacking somewhere. Not too into the smoked flavor.

A=Rich, dark brown...but no head to speak off...what was there was nice, but was rather thin and did not last long.

S=Hints of cocoa and cola.

T=Rather smooth at first--rather sweet, with hints of cocoa. About halfway through, it was reminding me more of a cola than a beer.

M=Very light body for a porter--good for a session beer, but not reminiscent of the style...I was looking for more body.

O=A decent session beer...I originally thought I was getting O'so Night Train and that the waitress was just getting the name wrong...I paired with pasta and Italian sausage and that combo was okay, but not fantastic. I will likely try again if I am looking for a sweeter, lighter session beer. Not quite as good as Wisconsin Brewing's offering, and still a few paces back of GL's Ed Fitz--nice to see, however, that Wisconsin brewers are at least trying to make better porters...and this is now the second Wisconsin porter that I've enjoyed.

Sampled as part of flight at the brewery.
Pours a dark brown, not quite opaque, with tan head. The nose is smoke forward with notes of burnt wood and mild chocolate. Some roasted barley notes come through at the finish. The taste is smokey and a bit one note. The malts don't seem to stand up to the smoke which makes for a one dimensional brew. Mouthfeel is on the thin side with appropriate carbonation. Overall, a standard smoked ale which lacks the necessary malt backbone.

poured on tap into Nonic pint at the brewery.

S - Subtle roasted malts with a light charcoal scent. The faint smokiness comes from the Beach wood smoked malts. Hints of slight coffee and sweet chocolate round it out.

O - A solid Porter from K4 that adds to their selection of beer. The smoked malts were and excellent choice.

A slightly smoked porter that shows off the breweries ability to craft some great malty beers. Slightly tart and acrid (not in a bad way) from the roasted malts balanced by the perfect amount of sweetness and smoke. A tartness from the yeast brings some diversity. A great beer to have on tap year-round.