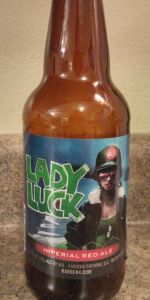 Notes: More than just a beer to satisfy and soothe – it’s an emotional experience. Deepest ruby red and filled with a symphony of malt flavors including caramel, toffee, raisins, and currants that finish with a simple hint of roast and chocolate tones lingering like a half-remembered dream. This gentle giant, balanced with English hops, dominates all senses without destroying the palate. Sexy. As. Hell.
View: Beers | Place Reviews
Reviews: 22 | Ratings: 113 | Log in to view all ratings and sort
Reviews by woemad:

12oz bottle courtesy of the largesse of @Ri0. Although the Lady Luck pictured on the label looks nothing to sneeze at, the artwork isn’t as epically absurd as that of Fantasty Factory, my only previous brew from Karben4. No obvious freshness date.

Poured into a Chuckanut Brewing pint glass, this was a dark, coppery, mahoganyish color, not unlike a cola. Held up to light, it took on a lighter shade that was somewhere between ruby and burnt orange. Good sized, beige colored head to start with. It dropped fairly quickly, but was easily agitated back to life, leaving spotty lace on the sides of the glass.

Malty, bready sweet nose, as I expected with anything claiming to be a red ale, imperial or not. What I didn’t expect was an additional component: a dry, roasted malt scent that was almost coffeeish. As it warmed, toffee notes emerged as well. Hops were generally mute.

Whoa! Very different tasting than I expected, even with the unusual notes detected by my schnozz. It does drink like a robust red/amber ale, with some dry, nutty, roasted malt notes, but what seemed almost like coffee and toffee in the nose is more like Dr. Pepper in the taste. Sweet but dry finish.

Medium bodied, with a mouthfeel that was coating and slightly creamy.

Truly not sure what to make of this beer. Easily the most unique thing I’ve had all week, even after the Selkirk Abbey IV I recently drank, which was essentially a beer without a style. This is a little too sweet for me to session (at 7.5% abv, it’s not a session beer in any sense), but in one-glass per sitting increments, I would have it again.

Like a lot about this. Agree that it's edgy for an Irish Red. Wish it had a bit more head, but really like the nose, mouth feel and taste of this. Carmel/toffee and tobacco notes. Rich burnt orange/brick red color. I live an hour and 30 from this brewery. Doing good things there.

Going from memory on this.... Deep red-brown with little foam, and scents of toasted malt and something more. Nice dark earthy cocoa with maybe some sweetness to override some of the (mild and not unexpected) bitterness. Mouth feel was one of depth and complexity. Clearly, I should have gotten another of these since the first went down so well.

Pours an amber color with little head or lacing. Smell and taste is of mild sweet carmel. Has a smooth mouthfeel. Overall it's a unique Irish red ale.

I got a presumptive bad bottle of what I think might have been a very good beer. I'm enjoying it, but it could be better.

What I like. Cocoa notes without trying to get in your face, some sweetness without cloying, beautiful garnet highlights (but otherwise, opaque), silky mouth feel. If really in the 7% ABV range, well hidden. Perhaps that sweetness is deceiving.

What was missing: head retention. The beer settled down into lifeless liquid, lickety-split. It released carbonation, but oh, so fast. I don't think it is my glassware, as this is not a problem I have often encountered. I think if I had head retention I would be scoring 4 or higher in every rating category.

Hops in this seem strictly for balance. That's OK. Perhaps if there were some carbonation, it would have been more aromatic, but I suspect the aroma would be dominated by the chocolate note.


This is the 3rd Karben4 beer I have had this week. It is the first one that I sat down to review. The others, a pale ale and an IPA, were very good. Each of these beers had a sweetness (crystal malt, I presume?), but always in balance. Hope to try this one again under more favorable circumstances. Will keep my eye out for more offerings

My numerical ratings are a compromise, b

Pours very dark crimson with a thin head that eventually fades to a wispy cover. Some lacing sticks.

The aroma is very malty - rich caramel, dark fruit with a hint of chocolate and light roast.

The taste is of caramel/toffee, chocolate. Malty sweet with a light roast with tannin-like (red-wine-ish) fruity balance in the finish.

Very smooth and easy-to-drink. A solid choice for a beer with rich, dark-ish malt character. A red that has some stout character. It has a complex malty character. A unique, enjoyable, brew.

First off, I dig this. This is more of an imperial irish red ale, as opposed to a red ipa.

Appearance: Pours a dark ruby/mahogany color. Deep brown to almost black at first, but held up to the light it displays beautiful red colors. Had an off-white head, which fades to lacing in a few minutes.

Aroma: It has a wonderful aroma of rich malt, caramel, a lingering dark fruit, and some hints of burnt sugar. There are also some notes of molasses or brown sugar, vinous qualities, along with an earthy or vegetal aromas, but in a good way. Some may call it tobacco type aroma.

Flavor: This is full of wonderful malt. It's sweet, bready, toasted malts, caramel, with lingering light molasses and dark fruits like raisins or figs. There is a mild tart, fruity or red wine character. Everything blends really well.

Mouthfeel: This is a full beer. It coats your mouth, and the flavor lingers. The beer is slick but dry.

Overall: This is a quality beer. This would pair really well with a flavorful cut of red or dark meat with root vegetables. It drinks pretty easily for 7.5% ABV, but I'd probably still only be able to have one or two.

On tap at Second Salem brewpub in Whitewater. I really enjoyed this beer although it didn't adhere to my definition of an Irish red ale. Great earthy malt and deep taste sets this beer apart from most Irish ales.